First-years capture the cosmos above campus 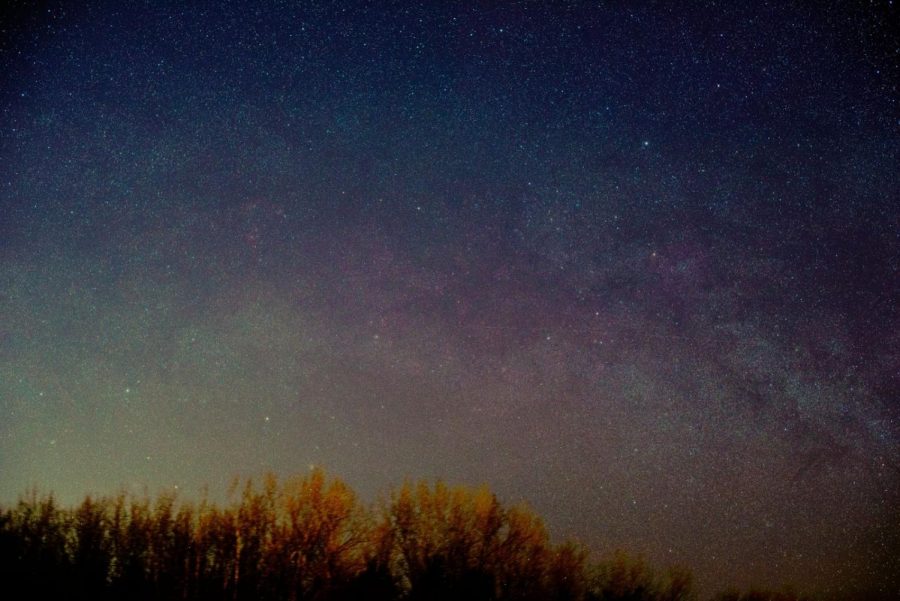 The Milky Way (the galaxy that contains our Solar System) above campus by Josh Picoult.

Astrophotography is more than just a hobby for first-years Josh Picoult ’24 and Tasan Smith-Gandy ’24. It is how they share the marvels of the cosmos with others through Instagram and YouTube.

Despite their similar interests and shared class year at the College, Picoult and Smith-Gandy took different paths that led them to astrophotography (which, as the name implies, is photography of astronomical objects and the night sky). Although they haven’t had the opportunity to meet in person yet, Picoult and Smith-Gandy have connected virtually to share imaging techniques.

Picoult began to pursue photography while hiking around campus using a Nikon D750 camera. “The idea of capturing something forever was really intriguing,” Picoult said. He specifically began exploring astrophotography for the first time while on Stone Hill after photographing the sunset. “I decided to point my camera at the sky and unknowingly took my first astrophoto. Since then I’ve been invested in taking pictures of the stars.”

Smith-Gandy, however, was inspired by his love of astronomy. “I can remember back in elementary school when I was in love with astronomy,” Smith-Gandy said. “Not that I was able to understand it in the way that I do now, but I definitely have always loved astronomy in some respect.”

Astrophotography also intersects with Picoult’s academic interests. For Picoult, a prospective history major, the process of documenting objects so far from Earth is a form of historical preservation. “If you think about these deep sky objects, they’re separated from humanity by millions of light-years, by actual time,” Picoult said. “That perhaps makes it just as foreign as any ancient object on Earth right now … to hold an astrophoto in my hand is to hold a historical artifact.” He stressed that astrophotography does not require fancy equipment or extensive experience. “As long as you have a camera and you have a tripod, you can shoot a lot of things in the night sky,” Picoult said. “I was able to come in with no knowledge and certainly find my way around the sky.”

Both Smith-Gandy and Picoult share their pieces on social media. Picoult posts his photos on Instagram (@joshpicoult) to bring to his followers a sense of wonder similar to that which he experiences every time he looks to the night sky. “Being able to share that with people, [to] show them that what’s right above us isn’t confined to the cosmos, is really special to me,” Picoult said. “It’s the idea of pursuing accessibility in an otherwise cosmic antiquity.”

Smith-Gandy uses Instagram (@spaceialawareness) and YouTube (Spaceial Awareness) to share his photography while incorporating fun ways to educate his followers about astronomy. “I enjoy educating in some way, be it entertaining … or random spewing of facts, which is really easy in astronomy,” Smith-Gandy said. “There are a bunch of cutaways to memes and funny pictures and such that add to the entertainment factor of the YouTube channel. I think that is helpful in some way for people to learn the content, which is the main goal.”

For anyone looking to begin photographing the night sky, Smith-Gandy encouraged patience. Sometimes it may take hours at a time to get a single shot depending on the brightness of the astronomical object and how far the light must travel to reach Earth. “It can be really tedious,” Smith-Gandy said. “But there are great things that come out of it.”