One in Two Thousand: Shenba Vairavan ’24 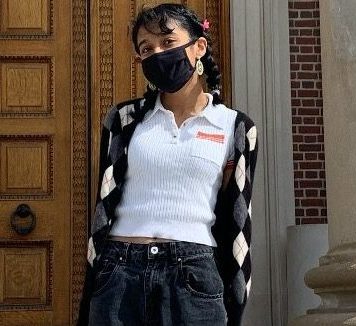 Each week, we randomly select a unix from a list of all current students at the College for our One in Two Thousand feature. As long as the owner of a selected unix is willing to be interviewed and is not a member of the Record board, that person becomes the subject of our interview. This week, the computer (using a script in R) chose Shenba Vairavan ’24, who talked about dancing, high school podcasts, and her first snowfall. This interview has been edited for length and clarity.

So just starting off, where are you from?

I’m from [Los Angeles], and I’ve lived there my whole life. And part of the reason I came here was so I wouldn’t be in LA anymore. [Laughs.] I like it here. It’s very different. This was my first time experiencing snow, so it was a lot. But it was really nice.

What was your first reaction to seeing snow?

It was in November, and I woke up, and it was just white outside. I was like, “This is the greatest.” I felt like I was five, like it was Christmas. It was so magical. But then, in February, I was very stressed because it was super snowy and cold all the time.

My source told me that you had a podcast. Could you tell me a bit about that?

So I had a podcast in high school. I don’t know really why I started it; it was right before senior year, and I was really bored. I had just done a writing program, and I was feeling a bunch of creative juices. I was like, “I should definitely have a podcast, everyone deserves to hear what I’m thinking about.” I made it, and I didn’t expect that many people to listen to it, but a lot of people in my high school did. And then, after like a year, we ended up being in quarantine, and I ended up stopping because I just didn’t have anything to talk about. But it was a lot of fun. It gave me something to do that wasn’t school related, and it made me think about a lot of things. There was no real point to the podcast. Sometimes I’d just get on it and be like, “Today was a lot, and I learned nothing from it.”

Must have been pretty good if all of your classmates listened to it.

I also heard you do dance.

I started dancing when I was 4. I do Indian classical dance, and it’s called bharatnatyam. I don’t really remember why I started — I think I was watching TV with my grandma, and she was watching this [dance] special, and I thought it was super cool and tried to imitate it when I was 3 years old. My parents immediately were like, “We need to put her in a dance class.” So I went to my dance teacher when I was 4 years old, and I stayed with her basically until today. When I was 14, I did what’s called an arangetram, or a solo dance debut, which is where you dance by yourself for a few hours with live musicians. It’s not a graduation, so to speak, but to put it in more ballet terms, you kind of finish dancing for the school and start dancing for the company… I’ve been dancing for like 14 years, and it’s a big chunk of my life. I feel weird not dancing here as much, but when the ʼ62 Center opens in the sense [that] I can just go practice whenever I want, I’ll get that normalcy back. I practiced in my room, but it was too small, so next semester, it’ll open up, and I’ll get to reintegrate [dance] into my life.

I have two friends who are frosh who also did this kind of dance when they were in high school, and all of ours are a little different stylistically — but we’re older, and we’ve done these things, so we can obviously come to a middle ground. We did things separately for Diwali in November, [but] there was another Hindu festival last month, and we got together and danced and recorded it and livestreamed it to be COVID-safe. But I think when things start to open up, the three of us will work together every day or every week and try to choreograph things and showcase once a semester, start a small Indian dance group. It’s just [been] an important part of our life for so long, it would be so weird to just stop.

So it’d be like a new club that you guys would start?

Yeah, I think there used to be an Indian dance club, but they don’t exist anymore. I think there’ll probably be more people who want to get involved and want to do it.

You mentioned that you danced by yourself, solo, for a few hours — that seems pretty nerve-wracking.

That might have been the coolest thing I’ve ever done, but you train for it for 10 months. When I joined dance, my mom was like, “If you want an arangetram, this is what you should be working towards in a few years.” And I went to a few, and I was like, “I really want to do this.” I spent ten months just training with [my dance teacher] privately and learning dances and practicing all day. That summer, I didn’t do anything else; I just danced. It was the most in-shape I ever was — I just danced, like, 50 hours a week. It was a lot of fun. I don’t think I could ever do it [again], even though I am a better dancer now. I don’t think I could dance as long as well. And then, the day of, everyone was like, “Are you nervous?” And I was like, “No, this is what I’ve been waiting for for so long!” My grandparents flew out from India — it was a big family event, and everyone was there, and it was wonderful. I’m glad that it happened in 2017, because my sister’s almost 14, and hers is about to happen. And due to COVID restrictions and whatnot, my sister’s is hypothetically postponed, and that’s a big stress factor in her life. I just feel very lucky that I didn’t have any of those problems.

My source also told me that you were working on a film?

We’re doing something called Edges, which is a musical, but we can’t do it in person. So instead of just having it be a musical that’s recorded and sent out to the school, we’re trying to reformat it so it’s more like a film musical. The rest of this semester is going to be really based on filming this project and working with other people to edit it and send it out to everyone. I can’t sing. I did musicals in high school because I could dance, and they were like, “Shenba, just don’t sing,” and I was like, “That’s a great idea.”

Any other hidden talents that you haven’t mentioned?