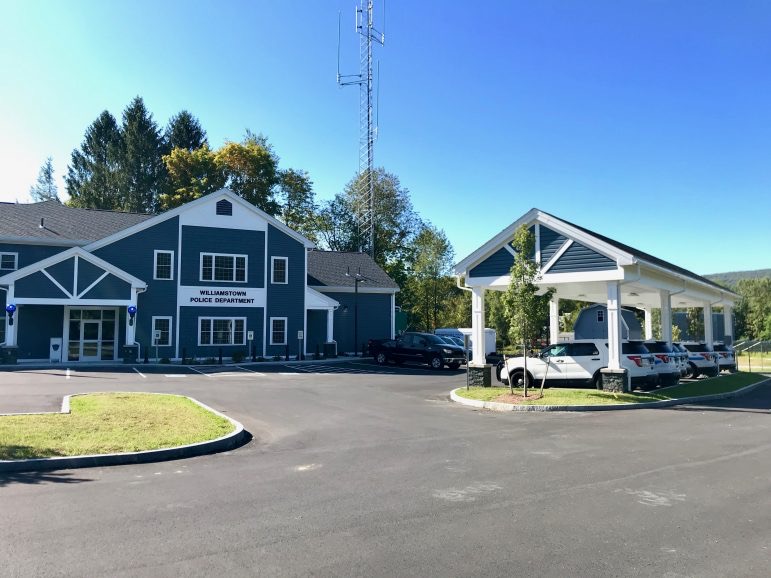 The Berkshire Eagle recently obtained a copy of the employee complaint against Williamstown Police Department (WPD) Sergeant Scott McGowan alleging that McGowan, who filed a lawsuit against the Town and WPD in August alleging misconduct, had himself perpetrated sexual and racial harassment. The complaint led the department to place McGowan on paid administrative leave last month.

According to the Eagle, the complaint alleges that McGowan “used the anti-Black epithet when referring to an officer of color, then told others that was allowable because he lived with that officer.” It further alleges that he “referred to [a female Hispanic officer] by name and stated ‘She came over on a rubber tube and that when she saw the Statue of Liberty … she said ‘I made it to America…’ when introducing her to a departmental visitor.” The complaint also claims that McGowan “stood behind a female officer and mimicked having sexual intercourse with her… while pretending to slap her buttocks” and “straddled the Department canine on the floor and pretended to have sex with her.”

McGowan’s attorney David A. Russcol flatly denied the allegations in the complaint, telling the Eagle that they were a retaliatory attempt at “character assassination.”

“Sgt. McGowan was a survivor of sexual assault even before former Chief Johnson engaged in this offensive and inappropriate behavior within the police department. He did not and would not [commit sexual harassment],” Russcol told the Eagle.

“Sgt. McGowan does not use the N-word,” Russcol also said. “Full stop. He would not justify it because his use of that hateful word would never be justified. This did not happen.”

The Eagle wrote that it “confirmed accounts in the complaint that are detailed in this story with at least two people with knowledge of the incidents.” However, Russcol wrote in an email to the Record that he and his client “are not aware of any corroboration of these allegations.”

“Sgt. McGowan is only aware of the contents of the complaint to the extent it has been publicly reported in the Eagle,” Russcol wrote. “The Town of Williamstown has not made it or its contents available to us despite repeated requests.”

“Without knowing more about [these allegations], it is impossible for us to seek out unbiased witnesses to rebut them,” Russcol added. “But we are confident that a thorough and impartial investigation will clear Sgt. McGowan of any wrongdoing.”

The complaint also alleges that “McGowan frequently belittled [former WPD chief Kyle Johnson] and questioned his competence,” and that “McGowan also made the statement that he would ‘burn this place to the ground and take everybody with it,’” according to the Eagle.

The complaint concludes by saying that some officers “are afraid to even come to work when [McGowan] is working,” the Eagle reported. All nine full-time members of the WPD, except for McGowan and Ziemba, signed the “six-page letter to town officials” detailing their complaints about McGowan.

Jessica Dils and Peg Kern, two members of the local police accountability group Williamstown Racial Justice and Police Reform (WRPJR), told the Record that the group has not spoken to any WPD officers about the allegations and that its current focus is on the Town community.

“[The community] has been subjected to 10 months of graphic descriptions of abuse and misconduct coming out of our police department,” Dils and Kern wrote in an email to the Record. “We are especially concerned for victims of sexual assault, racism and antisemitism. We look forward to seeing the results of the independent investigation the town has finally gotten underway. Above all, we look forward to Williamstown developing a 21st century public safety system that will prevent others from being victimized by this kind of harm again.”

Town Manager Jason Hoch ’95, who will step down from his role by April 20, had instructed acting WPD chief Michael Ziemba to place McGowan on leave last month because of the complaint, Hoch told the Eagle.

McGowan’s lawsuit against the Town, Johnson, and Hoch, which he filed in August, alleged several instances of racial harassment and sexual assault committed by WPD officers. McGowan withdrew his complaint in December following Johnson’s resignation.

At the Feb. 8 Select Board meeting, the board hired attorney Judy Levenson to investigate the WPD after public uproar over McGowan’s lawsuit and other allegations of departmental misconduct resulted in Johnson’s resignation. “Levenson has been tasked to include these allegations [against McGowan] in her investigation,” Select Board Chair Jane Patton told the Record.

Levenson was set to begin her investigation several weeks ago, but she will now delay its start to include the employee complaint against McGowan, as well as WPD officers’ illegal search of Town residents’ information through the Criminal Justice Information System (CJIS), which was revealed in March.