One in Two Thousand: Riley Galizio ’24 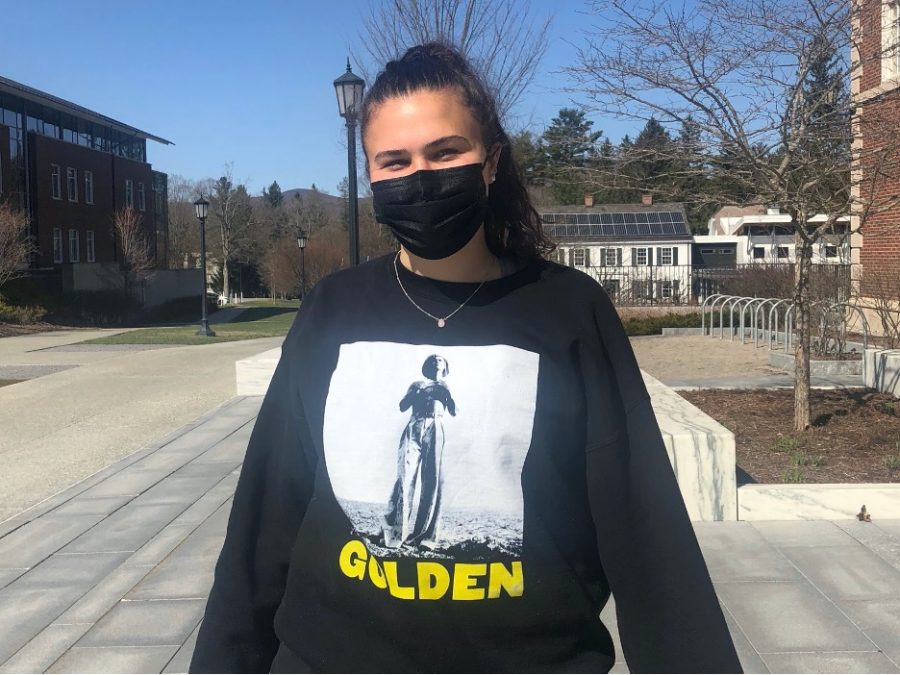 Each week, we randomly select a unix from a list of all current students at the College for our One in Two Thousand feature. As long as the owner of a selected unix is willing to be interviewed and is not a member of the Record board, that person becomes the subject of our interview. This week, the computer (using a script in R) chose Riley Galizio ’24, who talked about Taylor Swift, learning Italian, and ice hockey. This interview has been edited for length and clarity.

I see you’re wearing a Harry Styles sweatshirt, and I did a scroll through your Instagram and saw some Taylor Swift content, so that’s exciting.

Do you have a favorite album?

Of Taylor’s? I think “Reputation.”

I was just listening to that this morning!

I went to the tour, and it was amazing. Not to flex, but we were on the floor, and she walked through [the crowd], and I was so close to her.

That’s amazing! I went to the “Red” tour.

She’s such a good performer.

Have you always been a Taylor Swift fan?

Yeah, for my whole life. I feel like I’ve never gotten too intensely into her, but I’ve just always loved her music. Now my only music taste is Taylor Swift, Harry Styles, and One Direction. I mean, I have a few others, but they’re definitely my top artists.

Another thing I saw on your Instagram is that you row and play hockey. Do you have a favorite?

They’re very different. I’ve been playing hockey my whole life. My dad played hockey in college, so he got me and my two little sisters into it. I played all throughout high school, and it’s just really close to my heart. I didn’t start rowing until my junior year of high school, so it’s more of a new sport for me, but I also really love it.

Oh my gosh, I love everybody. They’re so supportive. I miss racing and being on the water, but even in practice, it feels like such a community, and it’s so fun.

What is your favorite class you’ve taken at Williams so far?

Maybe Italian. I’ve always loved languages. I took Spanish in high school and loved it, but I switched to Italian [during college] to talk to more people… I probably want to go abroad or live in Italy after I graduate for a bit and work on the language.

You’re kind of from around here — what’s that like?

I’m from Wayland, Mass. It’s kind of similar, but [Williamstown] is way smaller, and we have bigger stores and more things to do [in Wayland]. There’s more nature here, and it’s obviously a lot prettier here, but I think the people are very similar. There’s definitely a community in my town. We all go to the same pool and swim together, and then go to each other’s houses for s’mores. It’s very tight-knit, just like Williams.

Do you have any items on your Williams bucket list?

I really want to go to Homecoming, or any football game. I really miss the culture of athletic competition, not just for crew but for everything. It’s so fun to support your team… I’m from New England, so I’ve just been to lots of sports games.

Do you have a favorite team?

The Patriots, for sure.

What’s the best sporting event you’ve ever been to or played in?

My high school had a rival who we would play at the end of each season. My freshman year during hockey season, it was a home game. People never show up to the girls’ hockey games, usually only to the boys’ games, but for this game, there was such a big crowd. There were so many people; they were banging the boards and cheering, and it was so fun.

How was your senior season?

It was so fun and amazing. I was one of the captains, and it felt so good to be leading the team. We beat that rival and had such a good season. We all developed really well over those four years, so by senior year, our team was pretty strong… The last game was so sad. At the end, we all got into a big hug and cried, and it took us so long to all get off the ice.

It’s good that your season wasn’t ruined by COVID.

Yeah. I thought about that so much. If COVID had ruined my last hockey season, I would have been so upset. It did mess up my crew season, but I knew I would be able to row in college, and I did not know if I was going to play hockey.

Is there anything else you want the readers to know about you?

I was gonna say that! I got your vibe.

Once, I went into the croom of my entry and I guessed everyone’s signs. I got almost everyone on the first try and the rest on the second try. It makes me think that zodiac signs aren’t fake because I guessed based on personality and got them right. I totally believe in it.