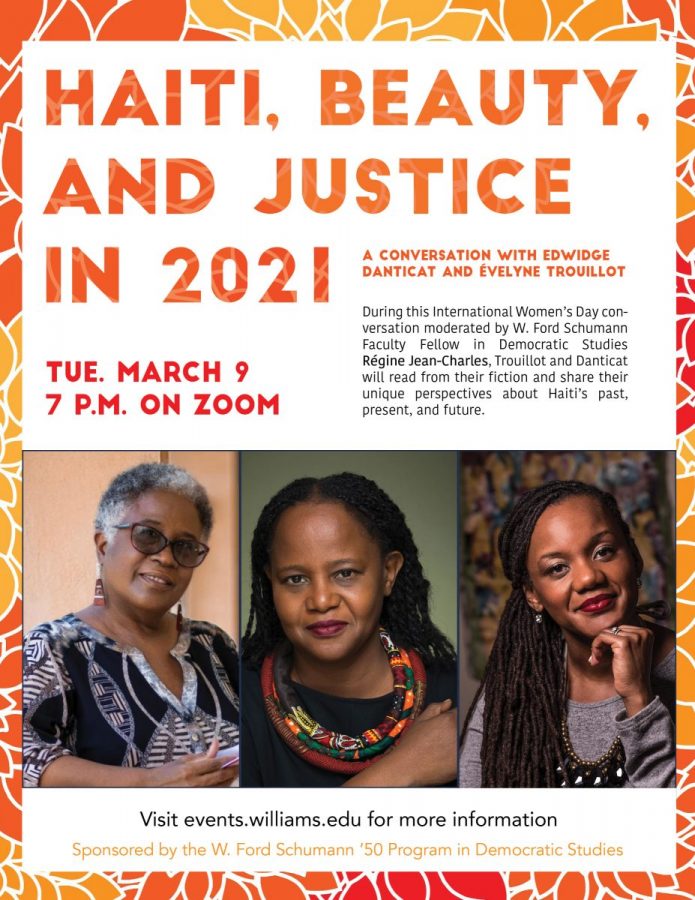 Haitian author Évelyne Trouillot and Haitian American author Edwidge Danticat discussed their writing, influences, and hopes for Haitian women and girls at an event titled “Haiti, Beauty, and Justice in 2021” on March 9. The talk, which was held over Zoom and was moderated by Visiting Professor of French Régine Jean-Charles, honored International Womens’ Day on March 8.

The discussion revolved around Trouillot’s recent essay called “Respecting the Diversity of Creativity”, in which she urges English-speaking publishers to better represent the diverse contexts from which many Black author’s works stem from.

She writes, “…my writings, stemming from my lived experience and my aesthetic and social vision for a more beautiful and just world, are presented to readers who are not always acquainted with my reality.”

The conversation began with the authors reading excerpts from their books, which both center around Haitian female characters. Danticat read a piece from Claire of the Sea Light, a story about a fisherman’s daughter who goes missing, while Trouillot read from Memory at Bay, a novel about the relationship between a dictator’s widow and her helper whose mother was a victim of the dictator’s atrocities. Danticat said that the dictator was based on the regime of former President of Haiti Francois Duvalier.

The writers then spoke about gender equality in Haiti. Trouillot suggested the importance of womens’ education and financial independence, stressing how men should also be educated to “look at women differently.”

“I think we can make a difference if we try early and make [Haitian girls] see themselves as human beings worthy of being educated … to love their bodies and choose what they want to do with their bodies,” Trouillot said. “If women are not free, they cannot be themselves… How can they be beautiful? You have to fight for beauty.”

Danticat discussed the influence that one person’s initiatives can have on local communities. She recalled how her mother-in-law established a sewing camp for girls, enabling them to creatively express themselves and learn new skills.

“That was one 80 year old woman who came up with this idea that grew into a sewing school, a technical school,” she said. “So I think one way that’s hopeful is to support initiatives like that. A lot of people have those ideas.”

She also expressed her optimism for the future of Haitian girls. “My hope for Haitian girls is that each one of us, in whatever way we can, mentor one girl in some way, not just with money but with advice or with support,” she said. “No matter our station in life we can make a difference in at least the life of one girl.”

Jean-Charles went on to ask the writers what they believed their responsibilities were as artists under Haiti’s current political climate, especially against the backdrop of economic turmoil and anti-government protests.

Finally, the authors answered questions from audience members and discussed the role of archives and history in their writings.

“What’s most fascinating about the archives is what’s not there: the gaps,” Danticat said. “And then you go and fill in. You might be a line in one very big book about one character and that’s the person I want.”

Trouillot spoke about the potential that writers have to influence historians. “Historians have to be respectful of the facts,” she said. “I don’t have to as a writer. I have to respect the context… What they can learn is to use fiction and go look for things themselves as historians. In that way, I can push them to look for what’s not there.”