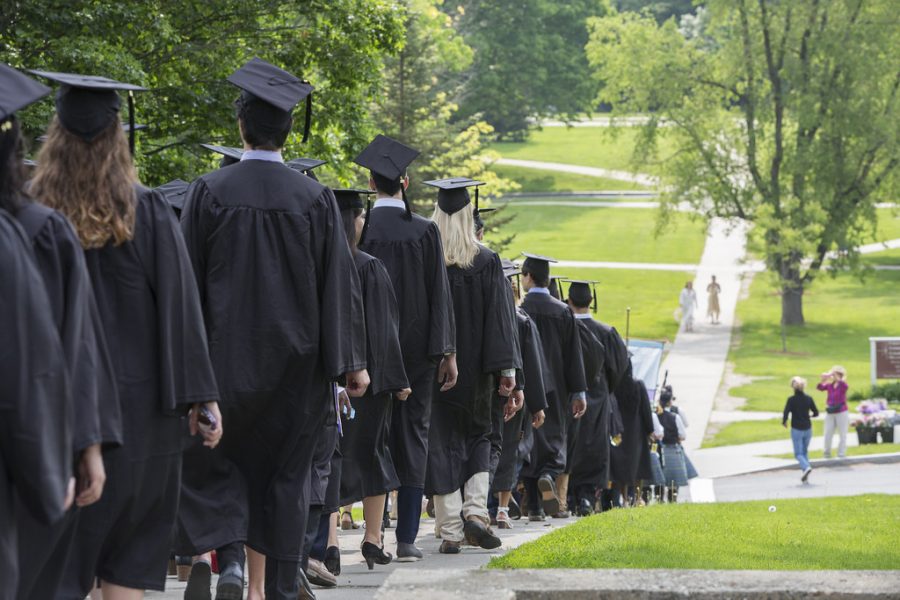 Editor’s Note: President Maud S. Mandel announced on March 22 that the College will allow two in-person guests per graduate at the commencement ceremony. The Record will continue reporting on changes to commencement and Senior Week plans.

The Class of 2021 will celebrate commencement with an in-person ceremony on May 31, according to the College’s commencement web page. Senior Week activities will be compressed to take place over a day and a half immediately after the final exam period concludes.

Most details of the ceremony, including its size and location, have yet to be determined, but the College has decided that faculty, families, and other students apart from the senior class will not be able to attend in person because of COVID-19 restrictions. Senior class officers, however, are pushing the administration to establish a contingency plan allowing seniors to stay on campus after the commencement ceremony for a full-length Senior Week instead of the current abbreviated schedule. The class officers are also asking the College to reverse its decision to disallow guests, pointing to peer institutions that are allowing students to invite a limited number of guests.

According to Director of Commencement and Academic Events Carrie Greene ’02, the College’s commencement web page was updated on March 1 to reflect the decision on the ceremony’s date, but this decision was not actively publicized. “We were really waiting to make some further decisions about what’s going to be happening before we announced that,” Greene said.

She noted that the May 31 date had also been announced on the Williams College Families Facebook page, “just so that folks can know when seniors would be done with the activities and when they would be preparing to leave campus,” she said. On-campus seniors will need to vacate their rooms by midnight on June 1.

Several seniors “are in ongoing negotiations with the administration” about the College’s commencement plans, according to senior class officers Oriana Cruz ’21 and Vince McNelis ’21.

“We strongly believe that the senior class has been doing a great job following the community pledge and [COVID] guidelines and will continue to do so throughout the semester,” Cruz and McNelis wrote to the Record. They noted that peer institutions like Bowdoin and Amherst “are offering contingency plans for students to graduate in person with limited guests.”

Bowdoin is allowing each graduate to bring two guests to their commencement ceremony, while Amherst’s commencement website states, “It is not yet clear if families and friends will be able to participate in any in-person events.”

“Our top priority is to push for an accessible and equitable date and time for commencement to take place so that all friends and families can witness the event in real time,” Cruz and McNelis said.

The officers will meet with Dean of the College Marlene Sandstrom and other members of the administration today, according to College Marshal and Professor of Chemistry Jay Thoman ’82.

Senior class representatives have also raised objections to the College’s current plans to compress class activities into a day and a half, with some student officers sending a survey on commencement and Senior Week into group chats.

“State and national guidelines PERMITTING, the Senior Class Leadership Team hopes to propose a contingency plan that allows for an extended stay beyond 6/1,” the survey states. The survey asks respondents whether they would be willing to continue following the College’s COVID safety guidelines in the event that Senior Week occurred after commencement, and whether students would like the College to allow a limited number of vaccinated guests at commencement.

Greene and Thoman expressed the hope that the entire senior class would be able to celebrate commencement in a single outdoor space, although that possibility would be contingent upon state and local COVID guidelines at the time.

“If we’re not permitted to have 500 or 550 seniors in one outdoor space at one time, then we need to think about the next plan, which is to have groups of, say, 150 in four different locations at the same time,” Greene said.

“We’re working on that as a plan B,” she continued. “Not the ideal, but certainly something that we have to think about as we consider what the possibilities might be.”

Massachusetts guidelines currently permit a maximum of 25 people at outdoor gatherings. “We talked about having 24 little ceremonies so we could do something in person,” Thoman said, but he said the planning committee anticipates the outdoor capacity limit to increase to 150 people in mid-March.

“Those numbers are projected to change again in May,” Greene said. “So whatever we plan now may be changing again. And that’s part of the challenge.”

“The goal is to create something joyous, celebratory, and safe,” Thoman said, to which Greene agreed and added that “safety is above all.”

But a light rain will not deter the College from proceeding with an in-person event. “We’ll get wet,” Thoman said. “Because we can’t do anything inside, it’ll be a pretty high bar to move the ceremony to entirely remote.”

Regardless of the weather conditions, the commencement ceremony will be live-streamed and video-recorded for family and friends, since it is “exceptionally unlikely” that their presence will be allowed, Thoman said.

Only members of the Class of 2021, President Maud S. Mandel, Sandstrom, members of Campus Safety and Security, photographers, and potentially Thoman will be allowed to attend. “That’s just a really, really tough part of the plans for the class of 2021,” Thoman said of the strict prohibition on guests. Faculty and staff are not invited either.

“Expecting that guests would be COVID-tested, going through the same protocol [as students on campus], even traveling to this state, is challenging,” Thoman said.

Another difference from graduation in typical years is the compression of Senior Week activities — usually a week long — into a day and a half. Senior activities will occur from the afternoon of May 29, the last day of finals, through the evening of May 30; elements of Class Day and Baccalaureate will also occur during this period.

In 2019 — the last time the College has held a standard commencement ceremony — Senior Week events included an ice cream social, a formal dinner dance at Mt. Hope, a jazz brunch, a semi-formal garden party, and a last chance dance. Given the restrictions imposed by COVID guidelines this year, “many historical activities will need to be re-envisioned,” Thoman said.

No decisions have been made yet about what activities will take place.

According to Thoman, the College decided to shorten Senior Week due to concerns that students might leave campus during a typical-length Senior Week in lieu of participating in the school’s programming, which would pose additional challenges to COVID protocols. “We’re holding these ceremonies and activities almost immediately after the end of finals, so there isn’t time for students to leave campus and come back,” Thoman said. “There isn’t a lot of downtime for students to wonder what to do with that time.”

According to Thoman, the final exam period will end at noon on May 29, and activities for the senior class will begin at 1 p.m.

This year’s commencement ceremony will also be unique in that it will not involve the awarding of actual degrees, since grades will not have been finalized by the time commencement occurs. “We’ll be handing out something, but the diplomas will be coming later,” Greene said. “[Thoman] is calling it commencement with a lowercase ‘c’, because it’s not an official commencement, so to speak.”

The senior class will officially be awarded their degrees in mid-June, when all grades are in and the trustees have approved their names.

Because students will not be awarded official degrees at the ceremony, the College is also considering permitting students who will complete graduation requirements after fall 2021 to participate in the June 2021 commencement, which they typically are not allowed to do. “It actually opens the door for that possibility,” Greene said.

After going remote last spring, the College declared its intent to host an in-person commencement at some point for the Class of 2020, but Thoman said that will not be possible this year. “It’s a lot of people to house,” he said. “These days, we couldn’t do it safely.”

Class reunions will also not occur in person this year.

Thoman expressed optimism that the Class of 2020 will still have a celebration of their graduation in the future. “As evidenced by Carrie and me, people come back,” he said. “You can bet that [for] the Class of 2020, there will be a moment when a lot of the class will come back and have an in-person gathering where there can be hugs, and photos, and being close together.”

Cruz and McNelis noted their hopes for an adjustment to the College’s current plans. “So far progress has been made but some aspects are still in negotiation,” they said. “We look forward to continuing our conversation with the administration to make progress on these important demands.”