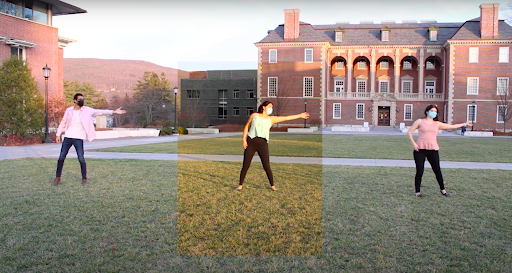 Ritmo members perform their fall showcase, "Stories of Separation", in front of Sawyer.

Chapin is quiet. COVID-19 restrictions hang in the air. But dance groups at the College have not disappeared.

During a typical semester, dance groups would take to the stage in Chapin to perform their fall shows to live audiences. With COVID restrictions limiting the size of large gatherings, they have turned instead to recording their fall performances remotely, appearing in a series of virtual shows released between the end of fall semester and now.

Uncertain as the fall semester was, dance groups also quickly adapted to remote recruitment, resulting in a cohort of passionate new members, many of them first-year students.

Each new first-year’s story coming to their respective dance group was as distinct as their chosen group’s dance style.

“I heard about CoDa (Contemporary Dance) when I was looking into Williams as I was researching colleges,” new CoDa member Junhee Lee ’24 wrote in an email to the Record. “Going to a school with a dance program was important to me.”

For Leilani Fuentes ’24, the journey to Latin dance group Ritmo Latino began in a classic Williams way. “I actually read about the Ritmo auditions from the Williams Daily Messages,” Fuentes said. “They were promoting online auditions and I knew I had to give it a try.”

Somewhat more traditionally, Ethan Richmond ’24 found himself called to NBC hip hop after attending their virtual Purple Key Fair open house where he signed up for an audition.

Ritmo’s fall showcase, “Stories of Separation,” consisted of three full songs divided thematically along the themes of solitude, (dis)connection to the self and others, and dating during COVID. NBC’s fall show, released on Instagram and YouTube, featured ten original dances choreographed by its members. The song selection ranged from classics like “Yeah!” by Usher, Little Jon, and Ludacris to contemporary favorites like “Hit Different” by SZA, “WAP” by Cardi B and Megan Thee Stallion, and “FRANCHISE” by Travis Scott, Young Thug, and M.I.A. CoDa, the College’s contemporary dance group, and Sankofa, the College’s only step team, are currently preparing their shows, to be released later this semester.

In producing their fall showcases, the switch from in-person to remote did not look the same for all groups. While Ritmo was able to record its show when members were still on campus during the fall semester, NBC opted to rehearse together in the fall and record their final performance asynchronously over winter break.

Navigating the technicalities of producing a show remotely came with its own set of challenges. For first-years, this included more uncertainty in a semester already fraught with newness. “I quite honestly did not know what to expect,” Fuentes said, recalling her early days in Ritmo. “I knew we wouldn’t be able to dance all together in the dance rooms like in a usual year, so I expected lots of team Zoom calls for dance practices.”

The difficulty of switching an activity rooted in movement and rhythm to a remote setting as a first-year was further compounded by the more typical growing pains of joining a performance group. “Balancing practice times and the usual school workload was the biggest challenge for me,” Fuentes said. “Although it was amazing getting to work with a lot of different Ritmo members, trying to find times that worked with everyone’s schedule was more difficult than I thought it would be.”

More than anything else, Richmond came to NBC looking for togetherness — something he feared would be hindered by a completely remote fall programming.

“I feel like dance provides me with a really big sense of community,” Richmond said. “One of my favorite things is dancing with other people, so when at the beginning of the semester, they didn’t know if the people on campus in NBC would be able to practice together, that was really scary for me.”

With a fully remote fall class schedule, Richmond was especially looking forward to quality in-person time with the rest of the group. “I think it would’ve been very difficult for me to participate and enjoy NBC as much if I had to do every practice remotely,” he said.

But he added that support was always present for members in case they ran into any difficulties, personal or technical, throughout and up to the release of the shows. “If I ever needed help in anything, I could have asked anyone, and everyone would have been really supportive and inviting,” Richmond said.

“Older and more experienced members also made it very clear that they were there to help anyone who needed help with anything, and their genuine support made me feel very comfortable and welcomed as a new member,” Fuentes agreed.

Running tech week virtually was yet another unprecedented step of the COVID-altered production process for dance groups this year. Learning the dances through a screen brought up new issues like getting the camera angles right, mirroring the dance moves the right way, and reconciling technical glitches with the choreographer’s creative vision — issues that would typically either be non-existent or resolved easily in in-person rehearsals.

“Because Zoom only allows us to look at the movements from one angle, it was sometimes harder for us to learn the movements and execute them the way the choreographers wanted them,” Lee said, remembering when a guest choreographer led Zoom rehearsals for CoDa in the fall.

Richmond had similar memories of NBC’s first in-person rehearsal, also led by a remote choreographer. “We had to mirror everything in our head and that was a really big challenge,” Richmond said. Even so, such hiccups only served as a way to help streamline and adjust the process in the long-run.

While none of the new members were remote, many returning members participated remotely. “I gave a lot of props to the people who were remote who either choreographed or participated in the show… [learning remotely] is difficult and it feels lonely,” Richmond said.

Even so, for Lee, there were some surprising upsides to pre-recording the typically in-person, live shows.

While the filming aspect was stressful in some ways, Lee shared that it was her favorite part of the process. “I liked that I was able to interact and bond with the members a lot more through the filming process, which was harder to do during rehearsals,” she said.

At the same time, pre-recording the shows allowed the new dancers to identify areas of improvements and act on them in ways that a live performance simply does not allow. “It was rewarding to be able to see how we improved from one recording to the next,” Lee said.

Richmond, however, had a different experience with the filming process. “Honestly, I’m kind of a perfectionist, and one aspect of filming yourself is that you can make sure it’s exactly what you want it to look like,” he said. “That also means that if you mess up, you do it over and over and over again. I spent a very long time … just going over it a lot.”

Despite the unprecedented nature of the programming and the COVID restrictions that guided it, the new members cherished the opportunity to dance again when countless events have been canceled due to the pandemic. “We got to perform on stage for the filming process and even though we didn’t have an audience, I still enjoyed it a lot because it felt good to know what it felt like to be performing again,” Lee said.

“Nothing about this last semester was ideal,” Richmond said. “So it was nice that we were able to do it at all.”