Coaching during COVID: The unseen challenges of building teams remotely 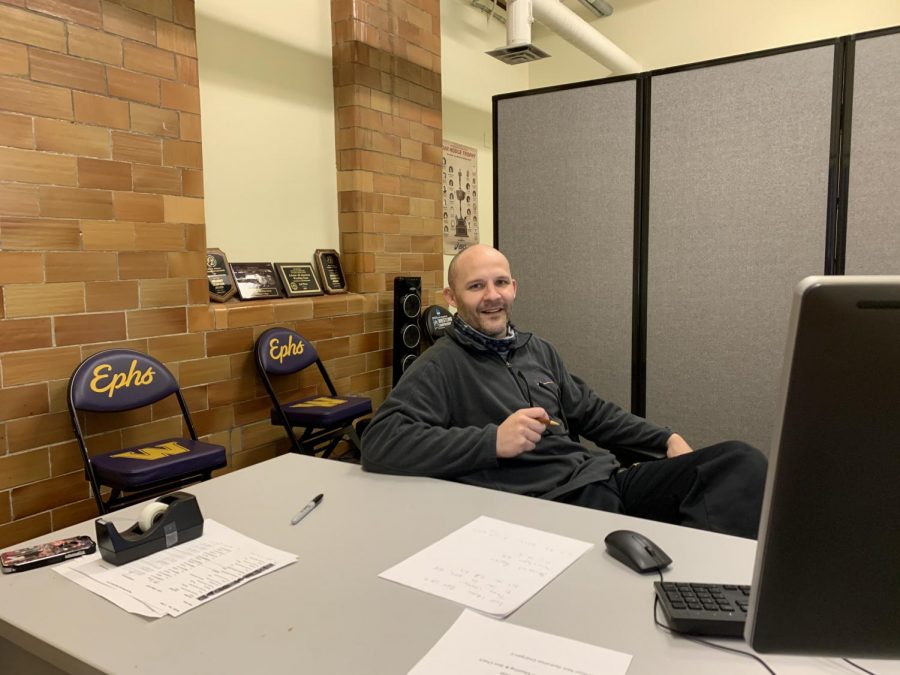 Despite not being able to see his athletes in person, men's wrestling coach Scott Honecker continues coaching and recruiting from his office with the help of technology. (Photo courtesy of Scott Honecker.)

Last March, men’s wrestling coach Scott Honecker was in Cedar Rapids, Iowa at the NCAA National Championships when he received the news that the College had made the decision to vacate campus in response to the spread of COVID-19 throughout the country. By the time Honecker had made his way back to Williamstown, many students had already returned home, leaving him scrambling for a way to get in touch with his players.

His solution was to organize a meeting for that Wednesday at 6:30 p.m. on Zoom, in which he would check in with the team and make sure everyone was healthy and back home safely. The meeting was a success, he said, and while Honecker still has not seen many of his wrestlers in person in almost 12 months, he continues to host weekly Zoom meetings on Wednesday nights for the team. “One Wednesday led to another and we haven’t missed one since,” said Honecker.

Like many of his colleagues, Honecker has been working to maintain a sense of stability for his athletes, many of whom are used to a consistent, structured schedule at school and during their season. However, because of the necessary technological adaptations, training has proven to be tricky. Away from campus, athletes have access to resources and facilities of varying quality, and coaches have had to learn to modify workouts to accommodate a variety of environments.

Similarly, for an indoor sport like wrestling with a lot of close contact, Honecker has also had to modify his training plans, incorporating more cardiovascular and strength development.“At a technical standpoint… we can only do five percent of what we need to do to develop a wrestler,” he said.

Training is not the only thing coaches have had to adjust during these unforeseen times. Having prospective athletes visit the College is an important step in the recruiting process for many coaches, but one that has unfortunately become an impossibility during the pandemic.

“We can observe most of [an athlete’s ability] on streaming video,” Honecker said. However, he added, the real limitations of recruiting lies in the differences in athletic restrictions and competition schedules across the country; while some states have started to allow practice and resume competitions, others have not.

“I am much more concerned for this upcoming class of 2022,” he said.“The Midwest is wrestling right now, [but] for Massachusetts and Connecticut, there is no reality where they’re going to contest the state championship.” With some states participating in competition and others not, coaches are limited in their ability to observe prospective athletes.

Similarly for App, recruiting has been centered around the use of technology. “Many high schools, club teams, and tournaments now have been able to live stream stuff on YouTube,” he said.

Yet virtually recruiting athletes who have never seen the College still proves challenging. While technology has allowed coaches to assess the player’s athletic abilities, it does not offer insight into the player’s personality, character, or compatibility with the College culture.

“Williams, to me, is centered around … a place built on the community and the people,” App said.

Despite not being able to have students visit campus, men’s track and field head coach Ethan Barron still keeps in mind that his job “is to get people who aren’t a part of Williams excited to become a part of Williams.” “That hasn’t changed,” he said.While the logistical difficulties of sports training at a distance are significant there has also been an emotional impact for coaches to be away from their teams. In his response to the Record, Barron wrote, “[My response] is all I have the bandwidth to put together … because I tear up as I type.”