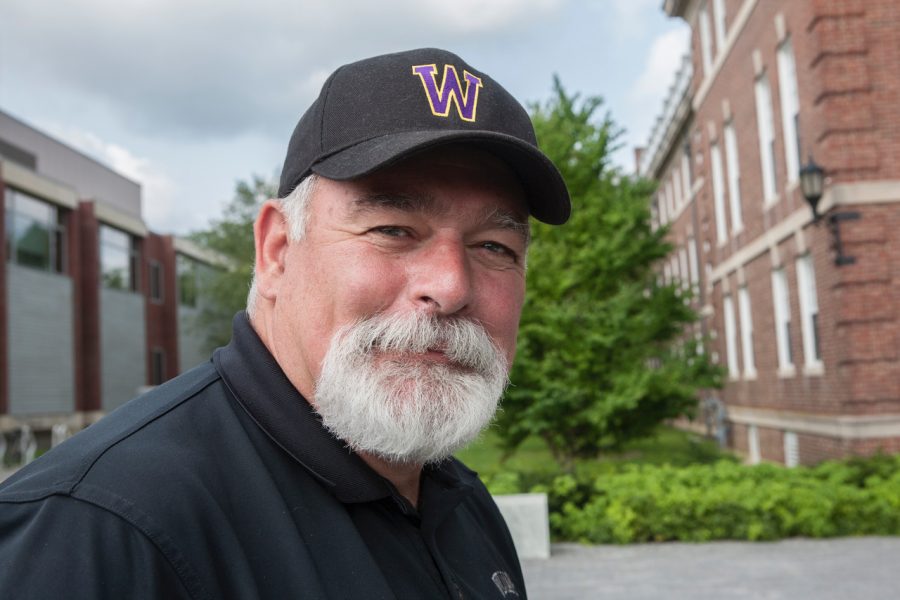 Boyer came to the College in 1989 seeking a position in the athletic department before he was hired as a CSS officer. (Photo courtesy of Dave Boyer.)

After 32 years at the College, Director of Campus Safety & Security (CSS) Dave Boyer will retire this August, Vice President for Finance and Administration Fred Puddester announced in an email to the College community on Feb. 24.

Boyer, who grew up in Williamstown, came to the College in 1989 in hopes of joining the athletic department. Due to a lack of available positions in the athletic department, Boyer was hired in CSS as a third-shift officer, where he worked nights and weekends. Boyer then became a department supervisor and held various directorial positions before becoming director over a decade ago.

“In reality, it’s like I coached here for 32 years,” Boyer said. “It may not have been on an athletic field, but my job almost exclusively has been coaching, whether it’s my own team here in Campus Safety or working with students closely over the years.”

According to Puddester’s email, throughout his time at the College, Boyer managed the emergency preparedness program; established the initial Clery Reporting program; and initiated the International Association of Campus Law Enforcement Administrators accreditation process, which is almost completed.

The COVID-19 pandemic brought new challenges for CSS, including monitoring public health guidelines. “Our jobs were way more involved in planning and emergency management roles this year,” Boyer said. “It was a real nice way to end a career.”

Boyer said he had originally planned to retire one year ago. “[But I] put that off and stayed one more year,” he said. “I really think, in the grand scheme of things, … I was where I needed to be.”

Boyer said that his biggest accomplishment throughout his time at the College has been hiring talented people to work in Campus Safety. “I don’t think it’s anything that I did, maybe other than judging character, and then surrounding myself with good people,” Boyer said.

These “good people” extend past the community Boyer created in his department. “I can remember students who are now parents who have children [that] now have gone to Williams,” he said. “In almost every case, the children who most recently came here all acted much better than their parents did when they were here.”

Students at the College, particularly Black students, have raised concerns of implicit bias in their interactions with CSS, highlighted in student advocacy efforts including the student-led Where’s My Safety? poster campaign in 2019.

“…The “Where’s My Safety?’ campaign was a real eye opener for most of [my] career here,” Boyer told the Record in 2020. “We were the good guys appreciated by students. We had great relationships with the students. And to see that that could have changed so dramatically really left all of us scratching our heads and wondering … what can we do to fix this?”

In September 2020, an external audit from an outside firm recommended that the department address the tensions existing between students and department officers. In response, CSS proposed various changes to its organizational structure to reestablish a positive relationship with the College community.

“Some of the etchings go back to the early 1900s,” Boyer said. “Nobody told me about this, I just had been up there and saw all those old etchings, and I thought, ‘How cool to not just have those be students of the past.’”

In his email announcing Boyer’s retirement, Puddester included complimentary sentiments from a number of individuals who have interacted with Boyer over his 32 years at the College.

“Dave understands better than most that all paths have curves and bumps and tricky spots,” Dean of the College Marlene Sandstrom wrote. “Many thanks [to Dave] for decades of helping students stay on course despite the detours, and for helping them achieve their goals.”

“When that message went out announcing the retirement, I got so many replies and ‘thank yous,’ so you never really know where you stand in the eyes of other people,” Boyer said. “This has been really awesome, to get all of that feedback and actually have it be so positive.”

Boyer said that he is making his last semester at the College as “meaningful” as possible. “The last two years, we’ve been working at a real furious pace,” he said, particularly because several senior-level members of CSS will be retiring within six or seven months.

After retirement, Boyer hopes to write a book in the form of a series of short stories about his time at the College, which would elaborate on the events published in the Spring Street Blues — a collection of reports compiled by CSS officers each week.

“Behind a lot of those [SSB stories] is a whole series of circumstances that you can potentially look at as, you know, bad and horrible and dangerous,” he said. “Over the course of time, and with perspective, and seeing some things happen over and over again, you do have to look at the funny side of things for sure.”

Besides his book, Boyer plans to also spend time with his family. “My wife and I both ride motorcycles, so we’ll do some touring,” Boyer said. But the “No. 1 thing” he said he would enjoy in retirement is spending time with his 5-year-old granddaughter Chloe.

“To just be part of every one of her activities growing up, whether it’s school, or sports, or her first horse ride, or whatever,” Boyer said. “She’s definitely the apple of my eye.”

“We’ve got a small farm with horses and goats and chickens, and so there’ll be more time to spend there with the animals,” he continued. “I’ll be close to town, but you know, far enough away that we can just have peace and quiet.”

Peace and quiet is one of his key goals of retirement. “I want to, the day I retire, throw away my cell phone,” Boyer said. “The phone, when it goes off at night, creates so much adrenaline, and I hope I never have adrenaline for the rest of my life. I hope I never experience anything exciting [and] I just find it to be nice and calm.”