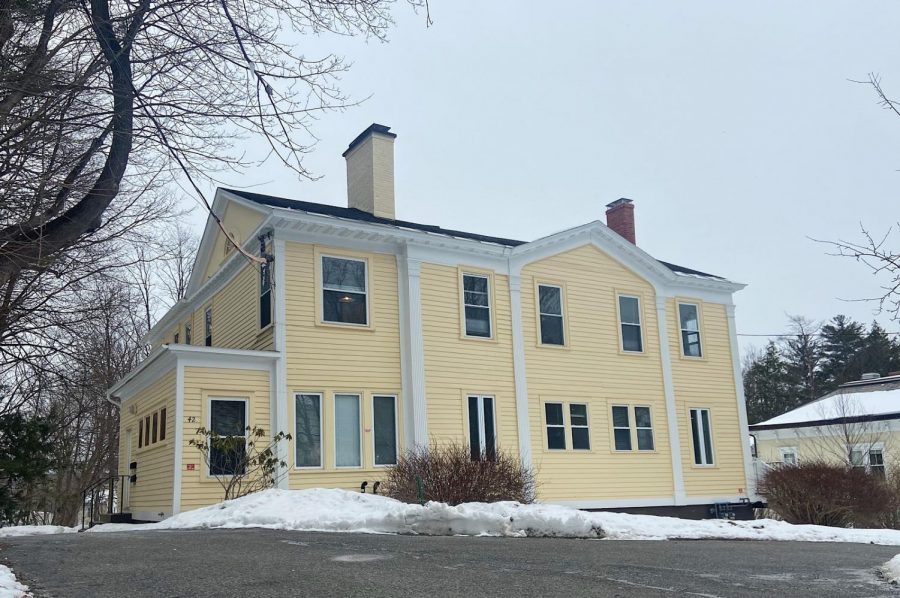 Two students who tested positive for COVID-19 were isolated for 10 days in McGinnis House, which was previously occupied by graduate art students. (Ella Marx/The Williams Record)

Eleven on-campus students have tested positive for COVID-19 since arriving for the spring semester, a significant increase relative to the number of COVID cases reported at a comparable time in the fall.

Seven of this semester’s cases were reported upon arrival, with the remaining four positives occurring after the student had initially tested negative. Three of those students, who at first moved to quarantine in Dodd House after coming into close contact with COVID-positive students, have since tested positive themselves and moved to isolation. One staff or faculty member tested positive on Feb. 15.

According to Dean of the College Marlene Sandstrom, there has been evidence of some community transmission in recent weeks. “We have seen 3 incidents in which a student is placed in quarantine because they have a podmate who has tested positive, and then that the student later tests positive themselves and moves from quarantine to isolation,” Sandstrom wrote to the Record. However, she said they have “no reason to believe” COVID is spreading due to lines at the dining halls or stores on Spring Street.

These three cases mark the first apparent community transmission at the College. “In the fall, we were not able to link cases together in any obvious way,” Sandstorm wrote. “Podmates of positive students, for instance, did not test positive themselves. This time, we are seeing positive cases among students who are close contacts.”

As of Feb. 23, a total of 20 students have spent time quarantining in Dodd House this semester. According to Director of Medical Services Deb Flynn, 19 were quarantined from an interaction on campus, and one was quarantined from a close contact that occurred at home. The latter student was not notified that a close contact from home had tested positive until they arrived on campus.

By comparison, only three students tested positive in their first week on campus in the fall, which resulted in 15 additional students moving to quarantine housing. Only seven positive tests in total had been reported among students by the time most students left campus in late November. The student case count only rose to eight during the winter, where it remained until most students returned to campus this spring, beginning on Feb. 10.

The College has heard some students voice concern about how well others are adhering to the public health guidelines, Sandstrom said. “[Campus Safety and Security] CSS has noted one or two instances of gatherings that are too large,” she said. “These groups have dispersed before CSS could identify the individuals involved.”

In one gathering reported by CSS, about 10 students were having a party in Mission Park, but they scattered when an officer arrived on the scene.

“Our response to violations of our public health guidelines are the same as they were in the fall, and include a change to remote status and/or a formal disciplinary process,” Sandstrom continued.

Last semester, students criticized the College for unclear communication and lack of support for students in quarantine housing. Sandstrom told the Record in November that the administration was working with quarantined students to improve communication, and that the small number of quarantine incidences back then meant “our process is still new.”

Now, with 28 students total having spent time in extended quarantine or isolation since students began returning on Feb. 10, the College has implemented some changes to its processes. The Record spoke with four students who have been in quarantine or isolation this spring on the condition of anonymity, given the sensitive health information involved. (They are referred to by pseudonyms and gender-neutral pronouns in this story.) The four students said that they were largely satisfied by the College’s communication and accommodations, although one said they did not receive adequate mental health support.

When “Blake” received an unexpected call on Feb. 13, they didn’t answer the phone at first. “I was actually watching a Netflix thing on meditation, so I was mid-meditation when I got the call, and I didn’t pick it up,” Blake said. “Then, I looked at my phone and I had gotten an email that said, ‘Urgent, call back this number about your test results,’ and I was like ‘Oh, God.’”

Flynn answered after Blake returned the call around 9 p.m. and notified them of their positive test result. Blake then moved to isolation housing in Austen House, which is normally a residential hall for graduate art students, about half an hour later.

“Jordan” tested positive for COVID on Feb. 13 and moved into isolation housing on the first floor of McGinnis House the following day. Despite testing negative on Feb. 10, Jordan said they began suspecting the following day that they might have contracted the virus. “I was having headaches and feeling really tired, so I wasn’t all that surprised [when I tested positive],” they said. Still, they described receiving the news as “shocking and nerve-wracking.”

“As soon as I got the positive test, I started searching up, ‘What are the symptoms of COVID? What are some long-term effects?’” Jordan continued. “And, as you know, if you have just a cough and you Google your symptoms, WebMD is going to tell you that you’re going to die. So I was really stressed out the first day or two and just really unsure of what a positive test would mean.”

Though Jordan’s symptoms went away shortly after they moved to McGinnis, Blake said they lost their sense of smell. For a few days, Blake said they felt like they had a mild cold and were drained of energy. “Now, I feel much better,” they continued. “I just can’t smell anything. But I still have my taste, so that’s good, I guess.”

Still, students who test positive face the potential of long-term effects from COVID. “I told [the nurse] that I was feeling better and so I got a workout in yesterday, and she was like, ‘Yeah, you probably shouldn’t do that because the virus can have an effect on your heart, so we probably want to get you checked out before you do any of that kind of stuff,’” Blake said.

Students who tested positive receive daily calls from the Health Center. “Having the nurse check in every day has been really helpful,” Jordan said. “Even though I haven’t had symptoms, it was just really nice to have someone to talk to about the situation.”

The 11 COVID-positive students must remain in isolation housing for ten days, as the quarantine and isolation period was reduced from 14 days to ten in mid-November based on updated Massachusetts guidelines.

Following their isolation, the COVID-positive students will no longer need to participate in the College’s twice-weekly testing regimen for 90 days, since they will likely continue testing positive without being contagious to others during this period.

“Cameron” moved to Dodd House on Feb. 14 after their podmate tested positive. According to Cameron, the College has been very transparent and accommodating of students in quarantine. “They’ve been very, very good about answering our questions,” they said. “It seems like every day or so a new person from the pod has a new question, and we’ll just call the Health Center and get an answer.”

Quarantined students have also been able to request additional supplies, such as utensils, towels, and course materials. “Before classes started, we had, every day, probably four or five separate deliveries just because people would put in a request and someone would get it here really quickly, in just a couple hours,” Cameron continued.

In a departure from quarantine protocol last fall, “A dean now reaches out to all students in quarantine to establish contact and to ask if the student would like regular contact [with a dean],” Sandstrom said.

Still, “Avery,” who moved to quarantine in Dodd on Feb. 14 after their podmate tested positive, said that their time in quarantine has been difficult. “There were three days in a row … when I just couldn’t get out of bed and was sobbing the whole time and was just really miserable, so I’ve been alternating between that and okayness,” Avery said. “It’s just been very stressful, and it feels like we’re locked away and cast aside.”

Life in quarantine and isolation

Although staff at the College responded to their emails promptly, and communication with students in quarantine and isolation has improved, Avery said they feel that mental health has not been made a priority for those students.

“They put a lot of stress on COVID and physical health, but not enough on mental health,” Avery said. “If they do, it’s just recommending IWS [Integrative Wellbeing Services] or Talkspace [an online therapy provider], but when you go to IWS you only get one 45-minute meeting once every two weeks.” One way to remedy this, Avery added, would be to offer specific IWS resources for those in quarantine and to increase the number of available therapy sessions.

Quarantine meals have also felt challenging for Avery, who is pescatarian but received vegan meals at first. “It felt very limited,” they said. Avery has since contacted the College nutritionist to request meals specific to their dietary needs. “Now I think it’s gotten better, but you also don’t get breakfast either, so you just get two meals a day, and so you have to hope that there are things that you like,” they said.

While Jordan said they felt that the College did “a pretty good job” handling student isolation, they added that some incidents could have been better addressed.

“Since this is graduate housing, they didn’t give us a [microfridge] in the room,” Jordan said. With a refrigerator on each floor, Jordan and the other person in the house could each use their own, but there was only one microwave in the house that they had to share. “We wear masks when we’re using the microwave, and we’re adhering to social distancing … but I just feel like even though we both tested positive, we could have gotten different variants or different viral loads,” Jordan said.

According to Jordan, the College had planned to move one more COVID-positive student to  McGinnis House. “But the person who lives upstairs called them and told them, ‘I don’t think it’s a good idea to have another person in here, because there’s only one bathroom on the second floor,’” Jordan said.

The College then decided to house the third student elsewhere, they said.

Blake was released from isolation on Feb. 23; Jordan, Cameron, and Avery are all slated to be released on Feb. 24.

Cameron was “disappointed, but not super upset” to have to spend their first few weeks on campus in quarantine, they said. “I was like, ‘OK. We can get through this.’”

When Jordan gets released on Wednesday morning, the first thing they plan to do is “go to class,” they said. “I have an 8 a.m. on Wednesdays. Also go to the mailroom, because the mailroom has sent me like 10,000 emails about my packages still being there.”