Fall coaches make the most of COVID-restricted fall 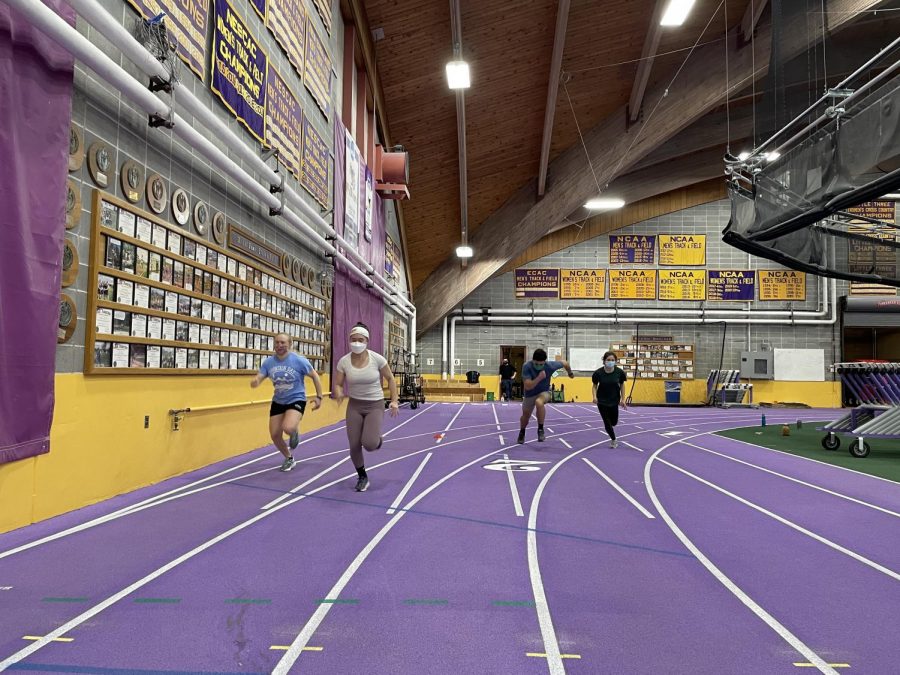 With COVID-19 restrictions and limited numbers on campus, coaches have had to adjust their approach to training.

Last June, President Maud S. Mandel announced that the College’s fall sports teams would not compete during the fall semester. Fall coaches subsequently had to make major adjustments to their usual practice and game routines.

Many teams used their practice time this fall to train and improve their technical skills. Men’s soccer coach Erin Sullivan focused on footwork skills and movement off the ball — activities that complied with both the College’s and Massachusetts’ social distancing regulations.

Despite COVID-19 restrictions, the fall season still offered opportunities for positive growth and change on the team, Sullivan said. Sullivan and his coaching staff were “always working to teach and mentor [the players] as well as learn from them and ultimately help all of us discover more about ourselves and our passions.”

“[We] opened our minds to some lighter, more fun activities that will definitely be infused into our program moving forward,” he said. “We honed two technical passing drills to become fusion exercises and revitalized a warm-up menu that will definitely continue to be evolved through our captains and seniors.”

Much like men’s soccer, women’s volleyball focused on individual skill development, according to head coach Christi Kelsey. However, it also faced an additional challenge: a change in training location. The team now had to practice outdoors instead of indoors in order to comply with social distancing regulations.

The inability to utilize indoor facilities, however, did not stop the team from making progress. “Having to adjust the way that we did for this past fall is absolutely going to help us in the future,” Kelsey said. “From a technical standpoint, we improved so much as a team.”

Similarly, men’s crew had a unique season due to their inability to row on water, since their usual practice location was a drive away from campus, in Pittsfield. According to head coach Marc Mandel, the team spent much of their time focusing on technique. Mandel attributed much of the improved technical motion to the increased opportunities for individual video feedback.

Aside from improving rowing technique, the team “embraced the idea of simply focusing on the present as a way to approach the unknown, taking full advantage of the Berkshires by run, bike and hike area roads and trails,” Mandel said.

While individual skill and fitness development were important, head coach of women’s soccer Sarah Raymond emphasized  that it is equally important to maintain a mindset of healthy competition within the team. Despite not being able to compete in intercollegiate competitions and in small sided games due to social distancing guidelines, she was able to find an innovative way to hold competitions for the players throughout the season.

Raymond said that the coaching staff split the squad into two teams — gold and purple — to employ a competitive aspect despite the lack of traditional games during the fall. “We would add a competition to the end of a passing drill or a finishing activity so players could work on their skill development under some competitive pressure,” she said.

Additionally, the coaches held “Saturday Fitness Days,” in which either the gold or purple team would complete a fitness and skill circuit while the other team cheered them on, as they would in a game. The fitness days typically concluded with a skill challenge between the gold and purple teams and “a WWS tradition of ‘minute to win it’ — a fun challenge that does not usually involve any soccer activity so we had dance-offs, trivia, [and] balloon popping amongst other activities,” said Raymond.

Men’s and women’s cross country had a different method for preserving the competitive aspect of the season. While competing in person remained impossible, cross country participated in a co-ed relay on the flat Cole Field grass, according to head coach Pete Farwell.

The team also had additional chances to virtually compete with other colleges by recording and sharing its competition times. “[One] virtual race was [the] 5000m on the track versus five other NESCAC teams, with Williams coming in second,” Farwell said. “The final scored result was a third place finish, as the Williams harriers raced on the damp 8k Cole Field course in the Division III New England (virtual) Championship. Nine Ephs placed in the top 35 individuals to earn All-Region honors.”

In a Record survey, fall coaches reported varying levels of on-campus enrollment. Men’s soccer had eight men for practice (five recruiter players and three members of the Reserve team) compared to the roster of 26 in fall 2019. Cross country saw seven men and six women away from campus out of 37 men and 28 women. Women’s volleyball had about 75 percent of their team on campus, while men’s crew actually had a three person increase in the number of players compared to fall of 2019 due to the rise in first-year walk-ons.

Despite changes to training, the number of players on campus, and competitions, team dynamics continued to grow.

Coaches emphasized building holistic team relationships among players and forging off-court connections . According to Sullivan, his coaching staff had “strong and dynamic relationships with our players as humans.”

“[The players are] young men first and scholar-athletes second,” Sullivan said. “Competition or not, we’re always working to teach and mentor them, as well as learn from them, and ultimately help all of us discover more about ourselves and our passions.”

Team relationships also developed off the field. “The most productive outcome of this past fall was the relationship building that took place between all of our players on campus due to the upperclassmen ensuring out of practice team building moments,” Raymond said.

Additionally, despite the lack of in-person intercollegiate competition, appointed captains continued to engage with players virtually to create a team environment. According to Sullivan, men’s soccer captains Eli Petrick ’21 and Will Felitto ’22 have “done an outstanding job of being liaisons with our coaching staff, keeping the team connected, and providing general support to everyone in the program.”

While the fall season was not one that many people could have predicted or wished for, it offered an innovative opportunity for coaches and teams to develop  techniques and skills in preparation for — and in hope of — future competitions.