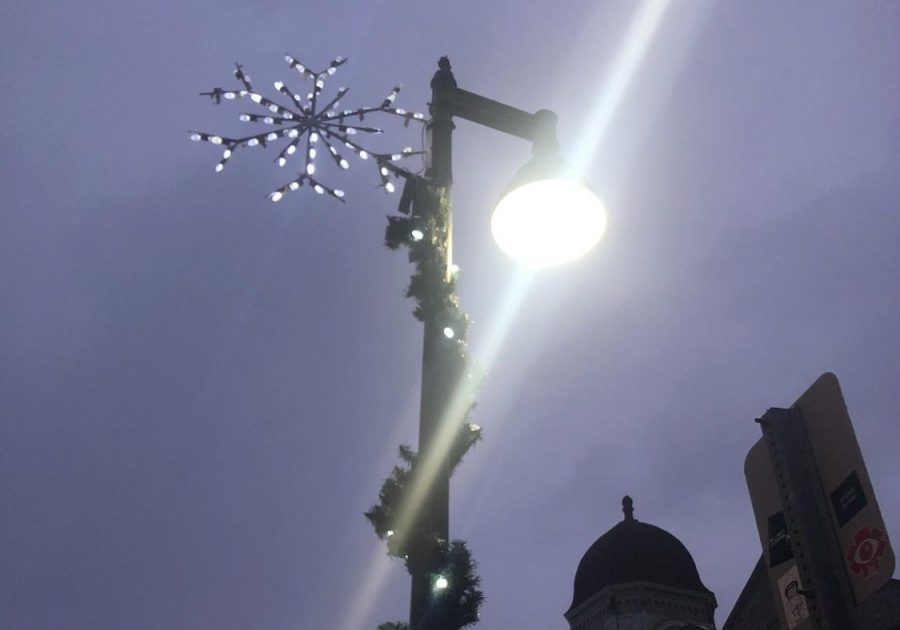 After a decade of community organizing, Williamstown may soon be getting new street lights.

On Feb. 8, the Williamstown Select Board unanimously approved an intra-municipal agreement to transfer jurisdiction of Williamstown’s street lights from the fire department to the Town Hall, making the Town fiscally responsible for the lights. The decision is the first step in the Town making the switch from high-pressure sodium (HPS) streetlights to more environmentally friendly LED ones.

Select Board member Andy Hogeland ’76 welcomed the motion. “Congratulations everyone on making this long-deferred dream a reality,” he said at the meeting.

The decision was spurred by a presentation from the Town’s CO2 Lowering (COOL) committee on its initiative, Converting Our Street Lights to LEDs. It detailed the results of the recently completed Tanko lighting audit. The audit included a photometric study, which describes how light leaves the streetlights and goes into the surrounding area, and cost estimates for the conversion project.

Looking forward, the COOL committee plans to propose that the Town purchase LED street lights in March. If this motion is successful, the committee will ask the Town to release the funds to purchase the lights and cover installation costs in April and May, and installation will begin this June.

As street lights age, the National Grid depreciates their value. Thus, because of the age of Williamstown street lights, the resale price of its 533 HPS lights is $1. “Essentially, they’re worthless,” Boyd said.

However, the LEDs and the work to install them are not. It will cost $194,000, after receiving a $50,000 rebate from the National Grid, and voters will be asked to approve a transfer from the town’s stabilization fund to cover the costs of the replacement.

These expenses would be quickly recouped: The LED street lights cost $22,000 annually to operate and maintain, a 70-percent decrease from the HPS lights. The savings mean that the cost of installing would be made up within three and a half years, according to the COOL committee’s presentation.

The audit also showed that the Town is equipped with 533 HPS lights of various wattages. At the Select Board meeting, Stephanie Boyd, chair of the Williamstown Planning Board, called the Town’s current streetlights “glow bombs,” as the light from HPS lights is emitted in all directions. In contrast, the light from LEDs can be directed downward toward the streets, where it will be useful, rather than into the sky, creating light pollution.

“Less lighting used properly is better,” said a representative from the International Dark Sky Association, a non-profit that advocates for less light pollution, at a community listening session held by the COOL committee.

“That light is going up into the trees, into the sky. We’re paying to illuminate things that don’t need to be illuminated,” Anne Jaskot, assistant professor of astronomy, told the Record. “[The existing HPS lights are] just harming our view of the stars and wasting energy.”

“There’s a lot of benefit in the area of being able to see the night sky,” Lecturer in Astronomy Kevin Flaherty said. “Seeing Comet Neowise or the Pleiades or anything like that is a huge draw. So, when talking about astronomy, it’s not just our department and our students that are affected — it’s also the larger community.”

Some residents raised concerns that the attempt to reduce excess light would endanger pedestrians, especially students and the elderly, who would be crossing busy streets in dimmer lighting. In response, Boyd said the Town’s ability to control the lights would alleviate the problem. “We could decide to turn them down to 50 percent after midnight, maintaining safety when people are on the street, but then turning the lights down lower when they’re not,” she said. Additionally, Boyd noted that no street lights would be removed, only used more efficiently.

This is not the first time that Williamstown has considered switching to LED lights. In 2019, the Prudential Committee, which oversees the fire department, opened negotiations with the National Grid to have Williamstown switch to LEDs for the cost savings it would offer. But, after facing community complaints about the color temperature, the committee canceled the project.

“The only ones they were offering were much too blue,” Jaskot said.

This request was about more than color aesthetics. According to Jaskot, blue lights create light pollution and are bad for the environment, human health, and nighttime visibility.

“Blue light scatters more,” Jaskot said. “This is why your sky is blue. So, from a light pollution perspective, that light is going to go everywhere. It’ll affect the starlight, it’ll affect the lighting in a much wider area than the typical [HPS] lights that we’re used to.”

Flaherty noted the negative impact on stargazing with both unshielded lights, as with the current HPS lights, or blue LED lights, as with the streetlights National Grid initially proposed. “You need a really clear night and it needs to be really dark, but it’s absolutely amazing when you get to see [the Milky Way],” Flaherty said. “That’s exactly the type of thing that you would lose if you have diffuse blue unshielded street lights.”

Circadian rhythms can also be affected by blue light. “Blue light can trick your body into thinking that it’s daytime if you’re exposed to too much of it. So, if you have a bright streetlight like that outside of your home, that’s going to make it harder to sleep,” Jaskot said.

Furthermore, researchers have found that, by disrupting circadian rhythms, nighttime exposure to blue light may increase the risk of cancer, though the study did not address blue street lights specifically. “Our bodies produce melatonin in darkness, and it helps us fight cancers and things like that, and, if we are not in darkness, we are not producing melatonin,” Jaskot said.

“If you’re driving in a nighttime situation and then suddenly come across a blue light, your eyes will have a lot of trouble adjusting,” Jaskot said. “You don’t want really blinding, bright light shining in your eyes when you’re trying to see.”

However, not all LEDs are blue. “LEDs can be good if they are well designed — if they’re not too blue and if they’re shielded,” Jaskot said.

After contacting the Metropolitan Area Planning Council, the COOL committee learned that purchasing ownership of the street lights from the National Grid would allow the town to select any color of LED to replace the existing HPS lights.

“The fire district, they don’t really have the manpower to do that kind of thing,” Boyd told the Record, referencing the time commitment required for the complicated processes of purchasing, installation, and maintenance of the streetlights. “So, [the COOL committee] negotiated a deal that Williamstown would take over the ownership of the lights and manage them in the future.”

Due to the COOL committee’s goal to reduce Williamtown’s carbon dioxide emissions, LEDs’ energy efficiency was the primary motivation for the Converting Our Streetlights to LEDs initiative. “Streetlights are big consumers of electricity,” said Boyd. Included in the committee’s presentation, the audit revealed that switching to LEDs would reduce the Town’s energy usage by 205,000 kilowatt-hours per year — as much electricity as 19 U.S. households typically use in that same time.

Switching to LEDs would also make Williamstown part of the Northeast Energy Efficiency Partnership, whose goal is to convert 30 percent of all municipal street lights to LEDs by 2020 and 100 percent by 2030. So far, 75 municipalities have purchased street lights from National Grid, and 37 have changed the lights to LED. These conversions resulted in 28,885,287 kilowatt-hours of electricity saved, according to the COOL committee.

“I’m pleased with the effort and very grateful that we even have the option of better lighting for the town,” Jaskot said. “Many towns don’t get that. Many [towns] haven’t educated themselves on the issues and don’t know that they’re getting bad lighting.”