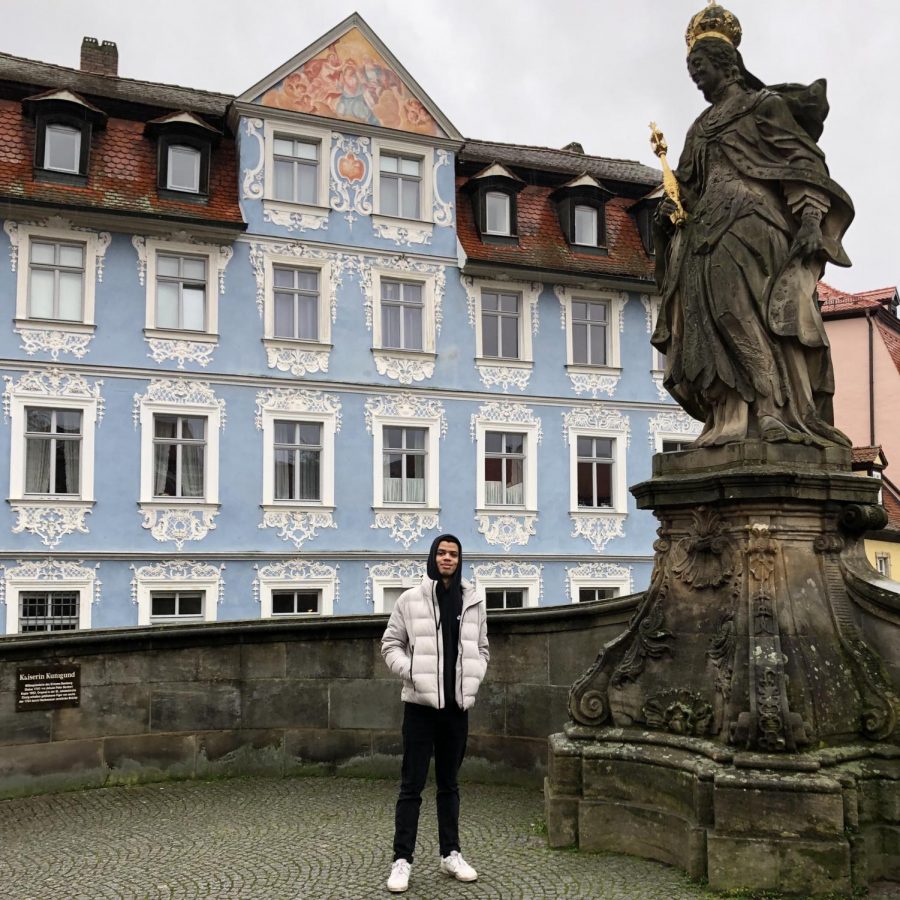 As Scarlet Rusch ’23 walked down broken pavement during her journey to class, singing along to the Russian cover of an anime theme, a pack of wild dogs jumped out of the bushes and attacked her. Shouting for help, she drew the attention of a Moldovan local, who came and threw rocks at the dogs to scare them off.

“Finally, they start[ed] to disperse, but they only did that because he was throwing the rocks at them,” Rusch said.

At the time, Rusch was studying abroad in Moldova, a small country in Eastern Europe, as a participant in the U.S. Department of State’s National Security Language Initiative (NSLI-Y), which focuses on language acquisition. Like Rusch, several students from the College have taken advantage of this opportunity to study in a foreign country while in high school.­­­­ Participants in NSLI-Y, the Congress-Bundestag Youth Exchange (CBYX), and Kennedy-Lugar Youth Exchange and Study (YES) Abroad spend anywhere from six weeks to nine months abroad, studying in countries such as Germany, China, Russia, Morocco — and, in the case of some international students, the United States.

While their experiences varied widely among different countries and programs, students generally recounted studying abroad as having transformed their lives, especially due to the opportunities for cultural immersion and language acquisition. At the same time, they faced difficulties dealing with navigating a different culture, homesickness, and even inconsistent access to adequate medical services.

A day in the life

Elijah Washington ’24 spent a summer in China with the NSLI-Y program and later went on to spend nine months in Germany through CBYX. Reflecting on a typical day in China, Washington said, “A day consisted of going to a local shop and getting breakfast, going to school where I would study Chinese for five-plus hours.”

“Then after school there would be a cultural lesson, which would involve Chinese calligraphy or dance or music,” Washington continued. “After school I would do homework and hang out with my host family, which meant playing soccer and getting dinner — it was really pleasant.”

Julia Powell ’23 also mentioned the importance of cultural immersion while reflecting on her experiences studying in Moldova with the NSLI-Y program. “One thing we did was a Moldovan painting session,” Powell said. “One of Moldova’s national prides is their homegrown wines, so we did a wine painting. You would take wine and mix it with water to dilute it. You could actually get a mesh of colors.”

For some students, studying abroad meant coming to the United States. Moiz Rehan ’19 grew up in Islamabad, Pakistan, and participated in YES, which took him to Chicago, Ill. There he spent nine months at an American high school.

“I remember taking an English poetry class where I learned about redlining, and it just opened up this Pandora’s box, and at the same time I was learning about the history of slavery in the U.S., so that was my first introduction to U.S. problems,” Rehan said. “Chicago became a really interesting place to be to understand all of that, because it is a really diverse city, but it also has a history of problems as well.”

Participants in these programs spent large amounts of time with their host families, often developing deep bonds. Pierre Cativiela ’24, a NSLI-Y alum who studied in Rabat, Morocco, for six weeks, recalled the relationship he formed with his host brother.

“We would walk to the gym together every day and talk about everything,” Cativiela said. “It could be politics; it could be the weather that day. But he always had a lot to say. It was really nice to really get to know someone in my host family.”

Several students remarked that people they met abroad assumed they were government spies. “People in Moldova would always ask if we were CIA trainees,” Powell recalled.

Living abroad for any period of time comes with its challenges, especially while one is still in high school. Many students recalled homesickness and a general feeling of isolation.

Even more seriously, Rusch described receiving inadequate medical care while abroad. After she discovered that she had been bitten by one of the dogs who attacked her, she went to the hospital, seeking medical attention that turned out to be insufficient. “Moldova does not have the full course for the rabies vaccine,” Rusch said. “We contacted the embassy, but because I wasn’t the child of a diplomat, they said there wasn’t anything they could do for me.”

“Some aspects of the culture were difficult,” Powell said of her time in Moldova. Female students were sexually harassed and assaulted while abroad, and female students of color were specifically targeted.

“I was followed at least five times, and because I had to walk everywhere, I was always on edge after that,” Powell added.

Students of color described encountering discrimination while abroad. “Going abroad as a Black person comes up with its own challenges,” Washington said. “It just kind of comes with the territory.”

At the same time, students experienced more basic challenges — especially language barriers. Near the beginning of his time in China, Washington got lost.

“I was at a restaurant with my American friends,” he said.  “I thought I knew how to get home, because I wasn’t that far away. It was dark, and I was walking along a park that I thought I knew. I thought it was towards my house but it was not, and so at like 10 p.m., my phone had died, I was on the outskirts of our suburb, but I came across these two Chinese women who were out on their night walk. Using the little Chinese I knew, I was like ‘help me’ and I was able to call my host mother.”

Washington laughed while recounting the experience. “It was hard not to panic, but Chinese people are so nice,” he said.

‘It changed my life’

Despite the challenges they faced, each student said that they were glad to have studied abroad in high school.

“The best part was that I really learned Russian,” Rusch said. “When I came in, I didn’t speak any Russian. I didn’t even know the alphabet. My professor once said to me, ‘You were so bad that we put you on a special list as one of the worst people on this program. We didn’t know what to do with you.’ But by the end, I was one of the best speakers in the program. My Russian was advanced, and I could talk to anyone.”

Cativiela spoke fondly of his time in Rabat. “I think that my time abroad really shaped a lot of my academic interests and has led me to things that I didn’t realize that I was interested in exploring academically.”

Rehan, whose time in Chicago was key in his decision to apply to Williams, said, “[studying abroad] was the beginning, and Williams was the culmination of all of that. The program gave me a really good foundation to want to apply again to the U.S.”

After graduating from the College, Rehan ended up working as a grant program assistant at a company that assists in the operation of YES, the program that took him to Chicago in high school. “I applied for an internship and within a month they gave me a full-time offer,” he said. “It just felt so right, especially because I have so much respect for this program because it changed my life in such a meaningful way.”

Rusch insisted that the relationships she built were one of the best parts of the program.  “I met my closest friend on the program — we write letters to each other all the time,” she said. Reaching across her desk, Rusch continued, “Actually, these are some of the letters right here.”