One in Two Thousand: Jared Berger ’21 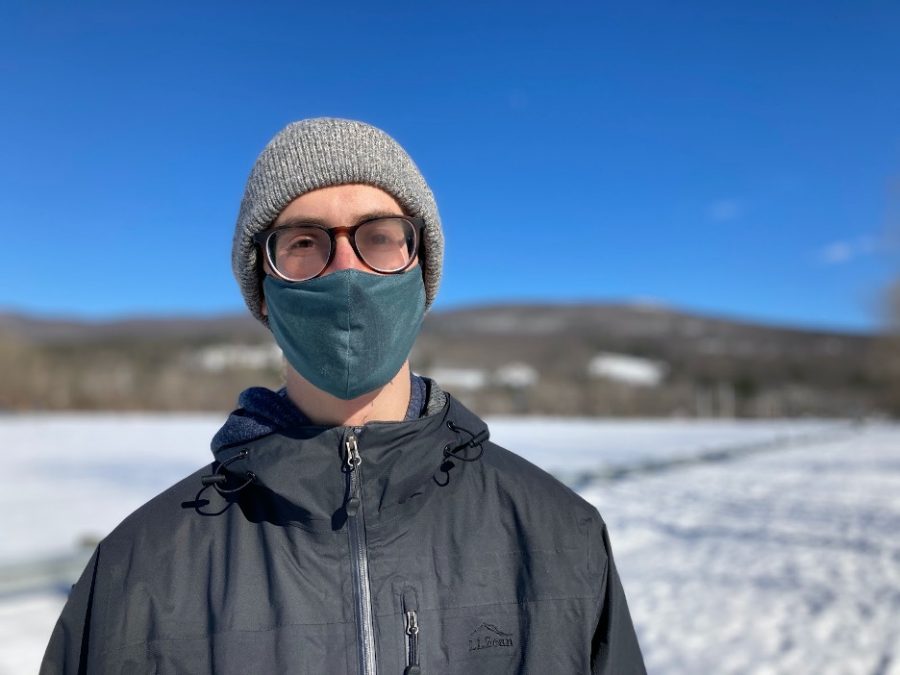 Each week, we randomly select a unix from a list of all current students at the College for our One in Two Thousand feature. As long as the owner of a selected unix is willing to be interviewed and is not a member of the Record board, that person becomes the subject of our interview. This week the computer (using a script in R) chose Jared Berger ’21, who talked about playing trumpet, being tall, and how sledding makes your butt hurt. This interview has been edited for length and clarity.

OK, so, here we are, walking down Mission Hill. What’s been your favorite thing since you got back to campus?

Probably seeing all those random people who you say hi to, but who you aren’t necessarily friends with. I just had none of that at home for all of January. I saw two home friends, and that was about it. So all the interactions with people at Williams who I don’t necessarily hang out with all the time, but [who are] still the people I know — running into people all over the place and having people to say hi to — that’s definitely been really fun.

Have you had any mask incidents yet? Where you’ve thought that somebody was someone, and they’re the wrong person, or you completely miss one of your friends, and then they get mad at you?

I think people usually see me before I see them. This is a running theme in my life right now. I think there’s some distinguishing features: the glasses, the height — I usually wear the same jacket — so people see me, and they’re like, “Oh, that’s Jared.” But then someone’s like, “Hi, Jared,” and I have to figure out who they actually are.

Since you brought up your height, how do you approach the world as a tall person? [Berger is 6’3”]

I don’t think about it all the time. Every once in a while, I’m in a room, and I realize I’m one of the tallest people in the room, and I realize that everyone else around me is probably like, “Whoa, that’s a tall guy.” When I see other tall people, I go, “Oh, they’re tall.” But I don’t think of myself as taking up vertical space most of the time.

Are there things you feel like you can or can’t do specifically because of it, though?

I’m always the shelf-reacher at home. I guess I can reach things. It’s something I don’t think about a ton, even though I think it’s something people see when they see me.

Do you feel like anybody is friends with you specifically because you’re tall?

I think you should ask all your friends next time around. Sorry to sow this seed of doubt in your mind.

So you play trumpet — what’s the gnarliest sound you can make on your trumpet?

There’s nothing cooler than, like, nailing a high note or something when someone doesn’t expect it. With trumpet, every day is kind of a guessing game in terms of what you’re able to play and what you’re not. I think it’s really cool if I’m in the middle of a solo and pull out a high note because one, I often surprise myself with it, and two, it’s just loud and grabs people’s attention, and it’s a lot of fun.

That’s a totally fair interpretation of the word “gnarly” as something good — I actually meant something that makes people want to crawl out of their skin.

There’s some fun stuff that happens if you take out the mouthpiece of a trumpet. Usually you have a mouthpiece that you play into. But sometimes, for fun, I try to play without my mouthpiece. Sometimes it sounds like a trumpet, and sometimes it sounds more like a dying elephant. I think my parents probably heard a lot of that when I was growing up. Not because I was playing without my mouthpiece — just because trumpet sounds pretty bad for a long time. You have to sound pretty bad for many years before you sound sort of good.

Where do you practice now?

I was practicing in my dorm room during quarantine. Most of the time, I practice in the practice rooms. But a pretty crazy story was, during quarantine last fall, my next-door roommate Alex Simons [’21], who’s one of my close friends — he’s also a trumpet player. So when we were stuck in quarantine with nothing else to do, we tried to play duets out the window. And it totally didn’t work. We couldn’t hear each other — we were on FaceTime at the same time, so we were trying to count off over FaceTime and play in real life.

Could you not see each other?

No. [Laughs.] It didn’t work at all, and I’m sure the whole dorm was mad at us because we were two people playing trumpet, badly, indoors. Everyone was in quarantine, probably just trying to watch Netflix.

When you were still in your learning trumpet phase, did your relationship with your family go downhill?

No! Absolutely not. I think the more interesting thing is, I live in an apartment building, so pretty much whenever I play trumpet, other people can hear me. It’s just a given. People above and below and next door can hear what I’m doing. But in my apartment at home, it’s mainly a bunch of old ladies, so I’ve gotten a lot more compliments than complaints about my trumpet playing. Or sometimes, I’ll be taking out the garbage, and there’ll be this old lady waiting in the hallway who will be like, “Oh, Jared, I love your trumpet playing! I miss hearing you!” And I’ll be like, “Aww, okay, I guess I should practice more.” My parents have recently been encouraging me to play towards the ceiling because we have these people who live above us, and they have these two little kids who just run in circles constantly. All you hear is, like, little footsteps and then a thud, and then someone starts crying, and this is pretty much constant. We don’t want to complain because we know what it’s like to have kids and all that, so it’s fine. But my parents have told me, “Don’t feel bad about playing towards the roof.”

Are there any other interesting things you did during those six months of endlessness from March to August?

I built a programming language that lets you create play-along tracks for jazz music. You basically input a series of chords as a program to the language, and it generates an arpeggio of those chords… I had this startup idea for a while, which I’ve now totally abandoned, which was Shazam, but you sing it. Right? Picture that! You can Google a song based on the lyrics; you can Shazam something if you have the actual audio. But what if you hummed a song, and then your phone could tell you what song it is? But first, it already exists, which I found out as soon as I started looking. And second, what happens if you can’t sing? Like, some people just can’t sing! Are you gonna discriminate against people who can’t sing? What happens to someone who can’t carry a tune, and they’re doing it to the best of their ability, but the app doesn’t know that?

What other questions are there to ask?

My butt hurts. I live in Garfield, and there’s a big hill right behind Garfield, so my friend Alex and I got some sleds over the weekend from WOC, and we went sledding yesterday along with some 10-year-olds. The thing is, because there have been little kids outside sledding every day since the snow showed up, which is like, since we’ve been here, the snow is so tightly packed that we zoomed down it. [Due to] some combination of walking up the hill 100 times and landing really badly and going over bumps and stuff, all four of my podmates and I are just waddling around clutching our butts because it’s just so painful.

Do you feel like, so far, this is going to have been a senior year that feels like a real, worthwhile senior year?

I have no idea how to feel about this year and this semester. It’s just such a weird mix of being excited to be here and seeing so many friends but, at the same time, still thinking about all the time it feels like we’ve lost. And just adjusting to the weirdness of being on campus and being almost able to pretend stuff is normal, even though it’s totally not. I just don’t know how to feel. There’s definitely a lot going on, and it’s really hard to focus on schoolwork. I don’t quite know. I’m definitely lucky to have been on campus, right? Like, that’s a good thing, I think. But I don’t even know how to feel about it. That’s my nonsensical answer.