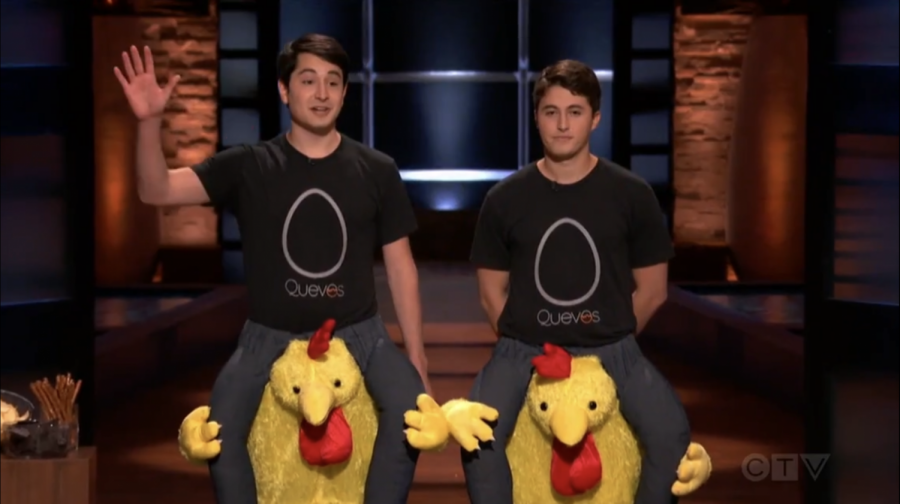 Zack Schreier ’21 (right) and Nick Hamburger (left) don chicken costumes for their pitch to the investors on Shark Tank. (Photo courtesy of ABC.)

Last month, Zack Schreier ’21 and his childhood best friend Nick Hamburger stepped into chicken costumes for their appearance on Shark Tank seeking support for their startup Quevos, a brand of healthy egg white-based chips that are high-protein and low-carb. They walked away with a $200,000 investment and $200,000 line of credit for 10-percent equity from Daniel Lubetzky, the founder of KIND Snacks.

“[That was] definitely the outcome we were looking for because of Daniel’s experience in food,” Schreier said. “As we were thinking about what we were willing to give away, we had a premium in mind for Daniel. We wanted him enough that we would have done a worse deal with Daniel than any other sharks [investors on the show].”

Schreier’s novel idea of a high-protein alternative for chip-lovers unable to consume carbohydrates came ten years ago, when he was diagnosed with Type 1 Diabetes. Forced to regulate his carb intake, he found himself cooking a variety of egg-based dishes, and it was a single egg-white omelette that planted the seeds of a business idea within his mind.

“I thought, ‘Those crispy pieces of egg white that coated the pan crunch like chips,’” Schreier said.

Eight years later, as he prepared to leave for his first year at Williams, he revisited the idea. In 2018, Schreier and Hamburger officially launched Quevos, which was the only pre-revenue member of the inaugural class of Springboard, a University of Chicago incubator program sponsored by Kraft Heinz. Since then, Quevos has seen rapid growth. A Kickstarter campaign in 2019 raised almost $72,000 from over 400 backers. Prior to their appearance on Shark Tank, they had raised a total of $1.6 million.

“From the inside, it didn’t feel like it was going too fast,” Schreier said. “It took us a while to get from concept to finished product … But, in terms of the growth, we did take off quickly.”

One advantage, Schreier said, was that the product serves a specific community. “And it’s also helpful to have had a story that people find interesting,” he added. “You know: college kids, diabetics, serving a need. That kind of a thing really helps to attract PR, and that drives sales.”

For Quevos, building this story behind the product was what led to its appearance on Shark Tank. “We weren’t really cash-strapped going onto Shark Tank,” Schreier said. “That’s why we kept the equity low and cash relatively low … We wanted to, on the one hand, get the awareness that comes with being on Shark Tank, and then also to have Daniel’s guidance — or any of the sharks would’ve been great, but Daniel especially.”

Quevos’ success, however, was not an immediate development. After sophomore year, Schreier, who was pursuing a philosophy and economics major, considered dropping out to focus on the business. “When I had left for the year, the story was that we were taking one year off to grow the business, and then we would reevaluate after that year was up,” he said. “If the thing had failed, no problem, we’d go back to school. If it was in a kind of in between, just getting by, then it would be a hard decision. And if it was going really well, then maybe I would continue to take time off.”

Schreier returned to the College after a year away, though not for lack of success in the business. “Fortunately, it was going really well,” he said. “We’d gotten traction, the product had gotten a lot better, our sales were growing. But I felt like I was really, really eager to be in a place where I could interact and talk about abstract ideas and learn more. I would come home from formulating every day, and I was just craving stimulus.”

Upon his return, Schreier found that his gap year had given him a new perspective of the College — and a changed relationship with the community. “There’s a kind of independence that you can get if you feel like you’re bootstrapping your own thing, and you can be self-reliant,” he said. “And I felt that when I came back. That fall after coming back was my favorite semester to date — not necessarily because I felt compatible with the broader community… That distance definitely exists, but maybe it’s more dispositional than anything related to the business.”

As Quevos continues to grow, Schreier looks to a future beyond his first business. His and Hamburger’s plan is to eventually sell Quevos once they have grown the business as much as they can with their own resources.

“It’s a fine balance,” Schreier said. “You want to find a spot in your growth trajectory where the future looks really good, and there’s still opportunities for the buyer to keep growing it.”

After Quevos, Schreier hopes to continue creating products that promote healthier, fuller lifestyles. “I’d like to keep building businesses that focus on cultivating integrated well-being,” he said. “So joy, personal growth, community, [and] health. I think the economy, as it currently stands, has figured out how to make a lot of goods for people that they’re going to buy… But those things actually aren’t amounting to a holistic improvement in the way that people feel about their lives.”