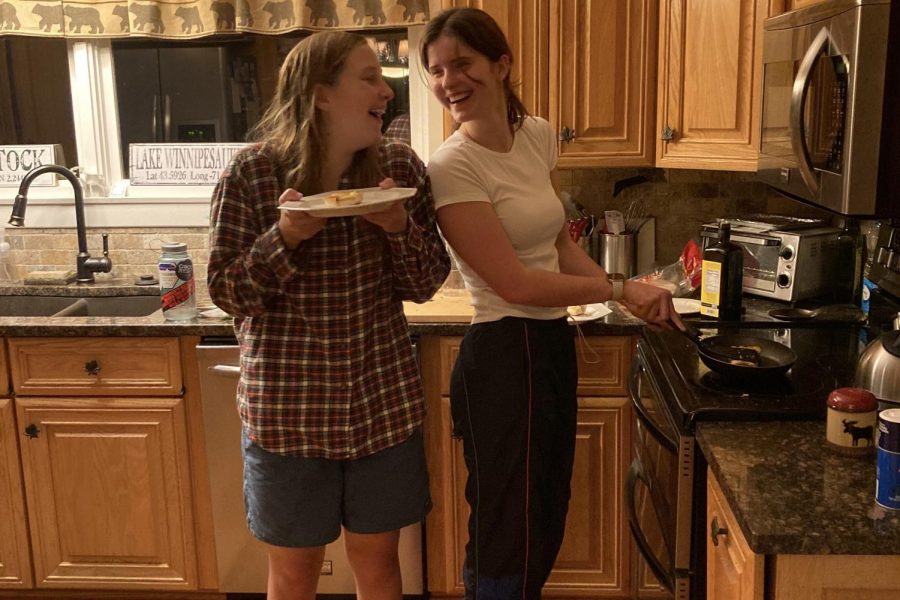 In honor of Valentine’s Day, the Record brings you its annual profile of a campus couple. This year, the Record interviewed Lizzie Ferguson ’22 and Sophia Sonnenfeldt ’22 over Zoom. After forming a close but “complicated” friendship as first-years on the water polo team, the two have now been dating for more than a year. I caught up with them to discuss Goodrich-induced caffeine addictions, being JAs, and COVID-friendly romantic activities.

Tali Natter (TN): How did you two meet?

Sophia Sonnenfeldt (SS): We met at a water polo party our freshman year. I think it was the first week of classes. I thought Lizzie was a JA because she said that she lived in Mission, and I was a Frosh Quad kid and had never met a Mission kid. So I was like, ‘Oh, she must be a JA, she’s so confident.’

Lizzie Ferguson (LF): I thought you were a senior because you seemed very comfortable in the space.

SS: I did arrive early to it.

LF: Which is such a freshman move, thinking back. [Laughs.]

SS: You should have known that I was a frosh from that. [Laughs.]

TN: What was your friendship like before you started dating?

LF: I lived in Mission and she was on the first floor of Willy so it was a very convenient stop on my way home from Schow. When it was really cold, I would go to her common room, warm up, and then leave.

SS: We hung out mostly through water polo stuff in the fall, and then by Winter Study we became pretty close and then got even closer in the spring. Then we went on the WOOLF training trip together, which was so much fun. And also complicated.

LF: Very complicated for her but I was just hanging out. I did not know of any of these complications. [Laughs.]

SS: By the beginning of sophomore year we were extremely close. We had a radio show together. On water polo there’s a whole thing about marriage, like a big inside joke that there are couples on the team that are going to get married and have a four-way wedding. And somehow Lizzie and I got matched up as a couple that was going to get married.

LF: But we were just friends. [Laughs.] We are very chaotic people so anything that we do together is inherently chaotic. But very good. It was chaotic good. And the chaos was a bit complicated.

SS: Sophomore year, on my end, everything was made a lot less complicated by the fact that I was no longer in a relationship and was able to reflect on everything. I don’t think I knew how I felt about Lizzie until sophomore year. I knew that it was different than most friendships but I didn’t know necessarily why until sophomore year… I think that one of the big turning points was Lizzie’s caffeine addiction. I worked at Goodrich and she would come for all of my shifts, but then it developed to basically five days a week, because we would know that the other person would be there.

LF: That was no small thing, because I lived in Tyler Annex, so the walk to Goodrich was a big commitment, and I did that at least five days a week.

SS: And then we spent 48 hours straight together. I went as Lizzie’s date to the Swim and Dive formal, and then the next morning at 6 a.m. we went to a water polo tournament and slept in the same room. After that, we both went through very intense withdrawal which was the “oh shit” moment for me. And then from that day on, we saw each other every single day that we were on campus until March when we got sent home. And we saw each other every day last semester too.

TN: So you saw each other every day — when did it become dating?

SS: That’s a complicated question. [Laughs.] I panic-texted her that we had to talk, and I was so nervous and when I get nervous I word-vomit a lot. I told her that I liked her but she didn’t really get it.

LF: Well you word-vomited for so long and it made no sense! [Laughs.]

SS: But then you told me that you liked me too, which was good. But you also said it in a roundabout way that I didn’t understand.

LF: I thought I was being clever, but only like 50 percent of my jokes land, so it was unfortunate timing. [Laughs.] And then we just lived in limbo for awhile … We were kind of together for like three months.

SS: We knew that we really liked each other, but we were afraid to label it.

SS: Lizzie lived in Tyler Annex last year and I lived in Hubbell and so we would constantly meet in the middle in Mission lobby, which is cute because this year we also meet in Mission lobby because she’s on the MD [Mills-Dennett] side and I’m on the AP [Armstrong-Pratt] side. We had lots of conversations in the Mission lobby during the winter because that was where it was warm, and that’s where we were when we decided to officially date.

TN: What kinds of things do you do, both on campus and during breaks, to stay in touch, with COVID-19 restrictions?

SS: We play a lot of online games like Rummikub and mancala.

LF: I’m trying to get her into chess, but I don’t think it’s gonna happen.

SS: The thing we got really into this past break was Sudoku. We would FaceTime for hours at a time solving puzzles. We also both did SelCom [JA Selection Committee], which was nice because we were automatically on Zoom for four hours a day.

LF: While we were on campus last semester, I don’t think I ever walked more in my life.

SS: Especially before we were allowed in each other’s rooms, we would go on really late night walks. We were so busy with First Days and frosh, so the only time that we could really see each other was for an occasional meal or a super late night walk. For three weeks, we would meet in the lobby and then walk around campus for hours.

LF: It’s nice because I feel like there’s a lot of things about being a JA that are kind of hard to explain to people that haven’t experienced it. It’s a lot of emotional work, and it’s nice to know that she understands it. It’s also really nice that we live in the same building.

SS: I think that it’s a really nice balance of Lizzie completely understanding what I’m going through and also being somebody who has received the same training and has had similar experiences, so I can always get advice from her if I need it. We both care a lot about the role and I think it’s been clear that that’s a big priority for both of us, and there’s never been any judgement if one of us has to prioritize the entry over the other person in a particular moment.

LF: It’s also nice because I feel like a big part of being a JA is making sure that you take care of yourself and prioritize yourself. And personally, when I look at a situation, I don’t prioritize myself and I always prioritize the frosh and make sure that they’re okay, and when I talk to Sophia about it, I know that she’s going to make sure that I’m prioritizing myself and taking care of myself.

TN: Do you have any plans for Valentine’s Day?

LF: Today we are getting tested at the same time, and we are gonna wear matching cow suits. [Laughs.]

SS: Growing up, I never really loved Valentine’s Day. My Jewish day school didn’t really let us celebrate Valentine’s Day because it’s not a Jewish holiday at all. So I think that made me never really like it as much as other people. I also think that it prioritizes certain types of love and certain types of relationships, and is wrapped up in a lot of heteronormativity of who gets to celebrate their love and the types of privilege that are associated with that. I’ve never been a huge fan of it, but now I kind of get it more now than I did in the past.

TN: What is a favorite memory you have together?

SS: I don’t know if I have one, but last year we used to do this thing where she would always walk me home, and by the time we got to Dodd Circle, I would want to talk to her more so I would end up walking from Hubbell to Tyler to walk her home.

TN: What is something you really like about the other person?

LF: This is kind of small and she’s gonna hate it, but I really like her laugh. [Laughs.]

LF: I don’t know, I just think it brings me a lot of joy that she has joy. And also I can usually hear it from anywhere on campus, I know that she’s happy and laughing which always makes me happy.

SS: I think one of the things that I like most about Lizzie is that I feel like I fluctuate from being very serious to very goofy and I think that Lizzie is always right with me wherever I am. Lizzie is always able to adapt to whatever mood I am in. She’s such a positive person, and so silly and goofy, but also really able to be so serious in a very nice and supportive way.

TN: What advice do you have for those looking for love?

SS: Tell the people that you like that you like them! Everything is so much better when you do that. That is my best piece of advice. It will never end poorly, because if you are friends with them then they care enough about you to not make it weird, and then maybe you can end up in a relationship that makes you so happy.

LF: We’re co-captains of the women’s water polo team. So my advice is to come play water polo, please. [Laughs.] I think for all you people out there suppressing the feelings you have for other people, don’t. Sharing your feelings can result in good things. It’s fun to fall in love with your best friend.

SS: [Laughs, blushes, covers face with hands, and falls out of frame.]