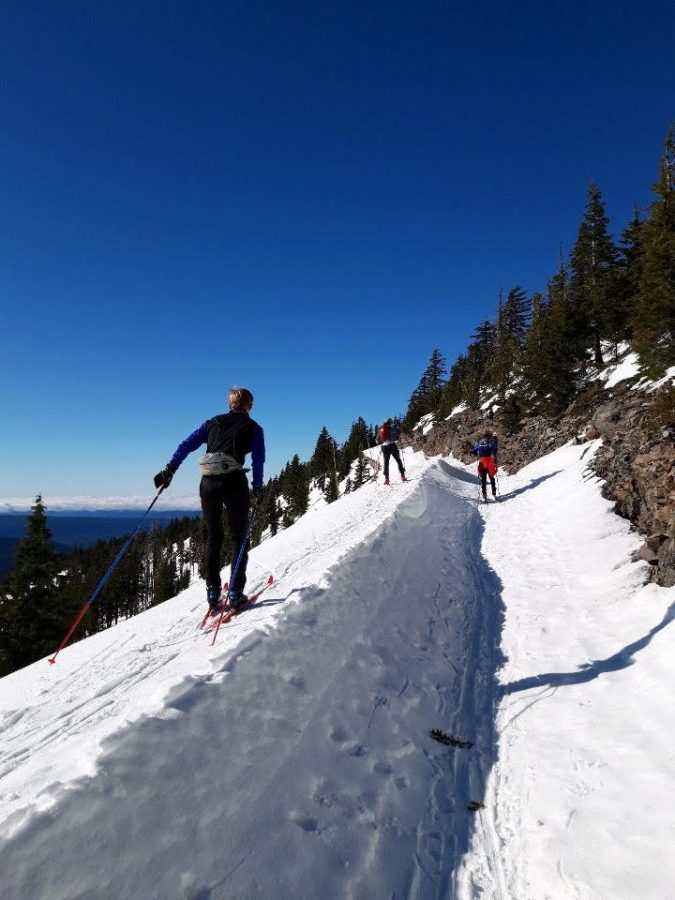 Some members of the Nordic ski team took advantage of the extended break to train together in Bend, Ore.. (Photo courtesy of Jakin Miller ʼ24)

In a normal year, most athletes spend January grinding through practices and lift sessions while braving the harsh conditions of a Williamstown winter. However, in an all-too-familiar manner, the pandemic has yet again thrown a wrench into students’ plans. Without winter study or team practices, some Ephs have taken unusual steps to find places to train.

One such athlete is Claudia Zhang ʼ24, who spent her January in Durango, Colo., with the other cross-country first-years. Determining that Colorado was the most equidistant from their hometowns across the country, the team stayed at an Airbnb in Durango, a rural town more than 6,500 feet above sea level. Taking advantage of the open space and lung-straining altitude, the team pushed themselves to their limits with long runs and workouts.

Coaches also stayed in touch with the team and offered advice remotely, according to Zhang. “Some of [our] coaches do send us training plans over the break, and everyone follows them depending on their ability,” she said.

Several first-years on cross-country, including Zhang, will also run track in the spring. In spite of the uncertainty surrounding spring competition, Zhang expressed optimism about their plans for the upcoming track season.

“I think it’ll probably end up being similar to what our cross-country season was like,” Zhang said. “We’re lucky that we run because we can do more of our sport during COVID.” While cross-country races in the fall were mostly limited to virtual time trials — where athletes run independently and record their race times — Zhang said she hopes that one-on-one meets between schools will become a possibility in the spring.

Some members of Nordic skiing also spent the extended break training as a group. Isabel Lane ʼ21 invited a few of her teammates to her family’s home in Bend, Ore., where they made use of the area’s mountainous terrain.

“There’s a snow park 15 minutes away, so we go there for skate skiing and classic skiing,” Lane said. In addition to skiing, Lane said the team also enjoyed going on long runs in nearby Smith Rock State Park.

While training off campus is not new for the Nordic ski team, the circumstances of this year’s winter season certainly are, according to Lane.

“Usually…we have a training camp in Quebec, and then we come back to campus and we’re racing every weekend through January,” she said. “Once we get back to campus, maybe we’ll organize some team time trials, but I don’t think we’ll be competing against anyone else.”

Outside of training, the Nordic team took time to explore the natural beauty of their surroundings in a socially distant manner. They spent a day skiing around Crater Lake, the deepest lake in the United States and located just south of Bend.

“We took some skis and just cross-skied around the lake [and] hiked up one of the mountains,” said Lane. “It was really fun and really, really beautiful.”

Cross-country similarly took advantage of their location to go on hiking trips around Durango. “I’m from New Jersey, and I don’t really get to see the outdoors that much,” said Zhang.

She added that the opportunity to bond with teammates in an isolated environment was also a highlight. “It’s fun to be with my teammates outside of the Williams grind,” Zhang said. “Usually during the school year you’re running around trying to finish your work … [You] see your friends at practice or eat dinner with them, but you don’t get to spend the physical day with them.”

Athletes not currently on varsity teams are also making the most of their January. Syl Foisy ʼ24, who did not join cross-country last fall because of COVID-19 restrictions but plans to walk on next season, had to get creative to stay active in the harsh weather of upstate New York.

With his home usually covered in several feet of snow, Foisy spent a lot of time shoveling, an activity he described as a “staple of [his] training.”

Moving around large quantities of snow also allows Foisy to express his artistic side, as he has developed a talent for making snow sculptures in his backyard. With the help of a friend and a ladder, Foisy is currently working on a 15-foot tall snowman, a work that he views as a worthy successor to the 10-foot tall snow fort that fell victim to the sun’s rays a few weeks prior. “My dad gets mad at me for not shoveling the driveway and just making sculptures instead,” Foisy said.

Foisy’s workouts are not just limited to shoveling. He has also dabbled in other forms of exercise over the break, ranging from cross-country skiing to step dancing. Foisy also tries to average a seven to eight mile run every day through the icy roads near his house, an effort he deemed “treacherous.”

Occasionally, Foisy’s love for shoveling and running come together with extreme consequences. “The other day, I just shoveled for like two hours and then ran a marathon right after,” he said. “That made the marathon a lot harder.”