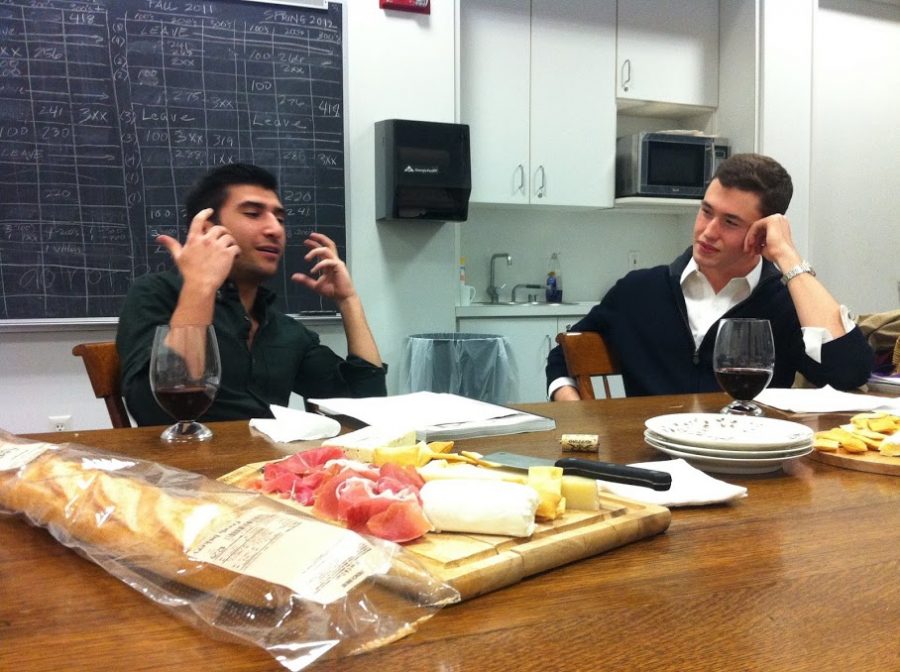 John Maher ’12 and Robert Khederian ’12 prepared a charcuterie board for the final day of the Michelangelo tutorial that brought them together. (Photo courtesy of Robert Khederian.)

Maher and Khederian first met in Professor Stefanie Solum’s ARTH 232 Renaissance Rome class, wherein Khederian’s first words to Maher were a compliment on his socks. “And I was not out yet at that point,” Maher said. “So that was not really on my mind.”

Though the two wouldn’t start dating until their senior year, they became friends. The timing was never right for a while. During their junior year, Maher studied abroad in the fall, and when he came back, Khederian went to study abroad in the spring. It wasn’t until their senior fall that they were in the same class again — this time, a Michelangelo tutorial with Solum.

However, the situation was complicated by the fact that Maher was in a long distance relationship with someone he met while abroad. Over winter break, Maher and his then-boyfriend broke up.

The day they returned for Winter Study, he and Khederian began dating. “Because we really had developed a very close friendship,” Maher explained. “Robert would probably not call it a friendship. He’d probably say that he was seducing me or something.”

“Like a succubus,” Khederian agreed. “Yeah, no we were very, very close … It just felt very natural. And then, we really just hit the ground running, which I would not recommend for anybody.”

With graduation came a crossroads. Khederian was moving to New York while Maher went to Germany as a Fulbright Scholar. “We had to decide whether we were going to stay together for that year of me being away,” Maher said. “And Robert was very resistant. And I was very persistent, and we stuck it out, but it was tough to do long distance for a year in very different time zones.”

Neither of them had ever expected a long-term relationship to come from their time at the College. They both distinctly recalled the constant emphasis during orientation on a statistic that 60 percent of College alums marry other alums (despite the rumor’s pervasiveness, the true statistic is probably closer to 20 percent). “It wasn’t even crossing my mind as something to consider,” Maher said. “That was in no way a goal of college.”

“I love Williams, but the gay scene at Williams is abysmal,” Khederian added. “If you’re a member of the LGBTQ community at Williams … there was literally such slim pickings. I would always joke that there were eight gay guys at Williams, but truly, I one time counted and there were under 30 … so I was shocked — I’m still shocked that I’m a part of that statistic.”