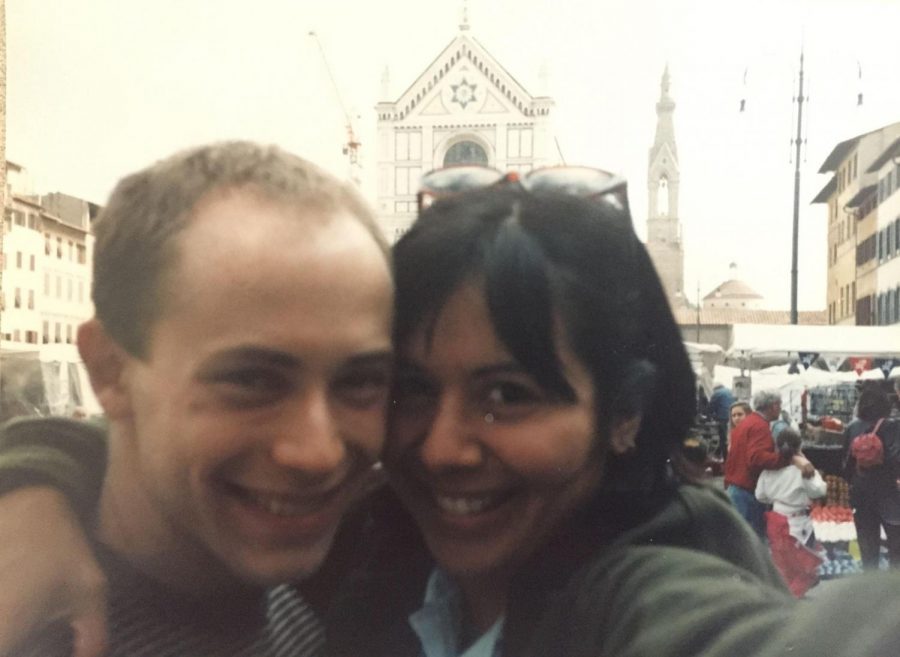 Sara Diaz ’93 took a selfie of her and Jamie Kerman ’93 with a bulky 35mm camera in front of Santa Croce, Florence. (Photo courtesy of Sara Diaz.)

“I already knew at the beginning, but it took her a while,” Kerman said. Diaz laughed before agreeing.

The two first met during the first social event arranged by the JAs of their entry. That night was the first time Kerman had ever gotten drunk. Diaz stumbled across him, sitting on the floor of a common room, and she decided to sit next to him.

“He made a big fuss,” Diaz recalled. “He wanted me to sit on a chair because I was wearing a red dress, and he didn’t want my dress to get dirty or stepped on.”

That was the beginning of a seven-year, strictly platonic relationship. Diaz soon entered a serious five-year relationship with someone else, but she and Kerman retained a strong friendship, despite never sharing the same classes or social circles. The summer before junior year, Kerman stayed on campus for research while Diaz stayed as a science tutor with her girlfriend, and they began to spend more time together.

“I was completely clueless that Jamie was at all interested,” Diaz said. “The friendzone, I guess.”

After graduation, Kerman found himself at Stanford for his PhD while Diaz headed to Switzerland to teach at The American School in Switzerland. Despite the distance, they continued to stay in touch. During the last year of her time in Switzerland, Diaz began to visit medical schools, including Stanford.

Diaz arranged to meet up with Kerman and found herself standing in front of a Noah’s Bagels in downtown Palo Alto, watching Kerman’s 25-foot long 1969 station wagon roar straight past her. As he passed her, she distinctly remembers seeing him in profile, catching her breath, and thinking, “Oh. That’s unexpected.”

Once Kerman finally managed to turn his car around after realizing he had driven right past Diaz, they spent the day together. Though the reunion wasn’t meant to be a first date, Diaz turned it into one when she asked him if he was going to kiss her.

“He doesn’t remember this part,” Diaz said, “but he said he wanted to, but he was afraid he’d wake up. I know. Smooth.”

The two kept in touch by email when Diaz returned to Switzerland, but after a surprise visit from Kerman and a weekend in Florence together, their relationship grew more serious.

Kerman proposed when Diaz was in her third year of medical school in San Diego. During one of Diaz’s free weeks in between grueling 40-hour shifts, Kerman asked her what she wanted to do. “I want to get as far away from San Diego as possible,” she said.

So they went to Paris, where the Eiffel Tower was decorated with a special light display that included a countdown to the new millennium. With 99 days left in the year 1999, Kerman proposed to Diaz on the top of the Eiffel Tower.

They’ve now been married for over two decades. Some of their favorite moments are when they are simply together. “I remember telling him that I looked forward to just being able to look over and watch him brush his teeth,” Diaz said. “It doesn’t have to be momentous. Just the fact that we are choosing to share them with one another makes them wonderful.”