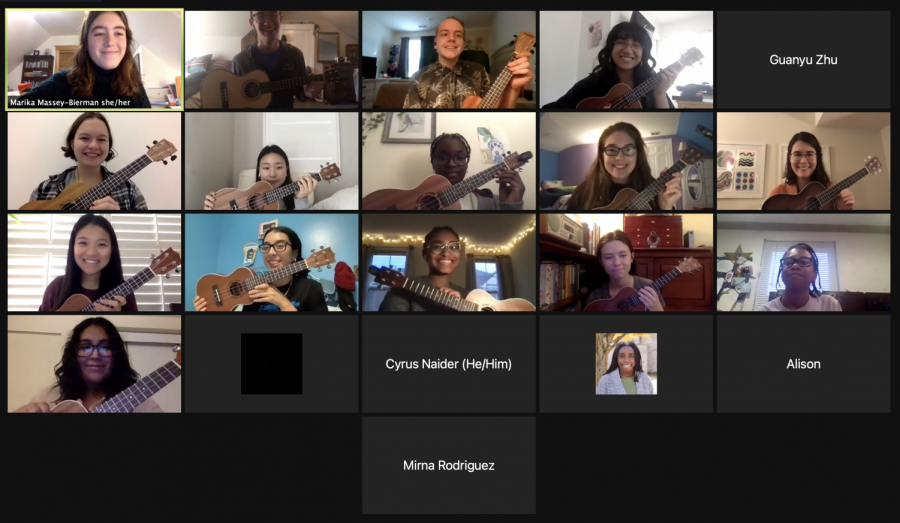 While students may not be taking official Winter Study courses this January, many are instead learning to play the ukulele, engaging in discourse about socialism, embroidering, or any of the other activities being taught through this year’s Free University program — and students are participating from all across the world through their computer screens.

Founded in the 1980s, the Free University Winter Study program organizes classes taught by students for students. This year, the program offers 48 unique courses — a 41 percent increase from last year’s 34 courses — which are being attended by over 600 people in the College community.

Until November, it was not certain if Free University would run at all this year, since College Council (CC) — the student governance body that organized the program in previous years — no longer exists. But the Williams Student Union (WSU), one of the three “pillars” of government that replaced CC, enthusiastically took over the project.

“We decided that we would take that on and continue it because, we thought with Winter Study being cancelled, we might as well have something to do for students,” said Samir Ahmed ’24, a first-year WSU representative.

Ahmed said the WSU got a later start on planning the Free University program than CC did in previous years. “We had a strict time frame that we had to manage, and because of all the new student bodies like FAST, we weren’t quite sure how fast budgets could be approved and how feasible it would be to get everything organized by the end of December,” he said. “But luckily, everything went relatively smoothly and there was enough interest that everything worked out.”

Free University’s organizers were surprised by the significant student interest in this year’s courses, both from potential course instructors and attendees.

WSU representative Argenis Herrera ’22, who led the initiative to reboot Free University this year, said he did not originally expect to see this much student interest.

“I think we expected the Free University programming this year to be smaller — for one, WSU is relatively new compared to CC and we didn’t have the infrastructure in place to do something like this,” he said. “Many students are likely Zoom fatigued and not into [doing] more video chats with other people. However, I think the cancellation of Winter Study and the need for students to be with other students after so much time on their own at home — that did the opposite.”

The large number of sign-ups also surprised Marika Massey-Bierman ’22.5, who is leading UKES 101: Introduction to the Ukulele. She said she was not expecting many students to be interested in her course and was shocked when almost 100 people signed up.

“On the initial form, I got 97 responses, which was kind of overwhelming,” she said. “It was crazy.”

In order to teach a large number of students effectively, she enlisted the help of Harrison Toll ’22, who is now co-leading the course.

Georgia McClain ’22, who is helping to lead a leftist political education course along with other members of the Williams Young Democratic Socialists of America (YDSA), said the course’s participant tally has been pleasantly surprising, with upwards of 50 students currently enrolled.

One likely explanation for the increased interest in Free University courses is the cancellation of this year’s Winter Study. Being home and without regular coursework, many students have been left with significant free time.

Ahmed explained that in a normal year when people are on campus and taking official College courses during Winter Study, Free University doesn’t offer as many courses, and the courses that it offers attract less interest.

“On the first day that we released the catalog, instructors emailed us back in a panic because they got a lot more sign-ups than anticipated, and a lot of instructors had to close their course early because they just couldn’t have this many people in a Zoom class,” he said.

“I’m a junior and I didn’t even sign up for one my freshman and sophomore years,” she said. “… So to go from not feeling like I even had enough time to take a course to feeling like I have the time and the energy to help organize and lead one, leads me to believe that the cancellation of Winter Study had a big part in that.”

Massey-Bierman, an athlete on the College’s Nordic ski team, also found herself with much more free time than usual without a competitive ski season.

“This would be the time when we would be starting our competitive season, so [with] the combination of that and taking an actual Winter Study class, I’m actually pretty busy, normally,” she said. “This year, with no normal season and no normal class, I thought it would be a fun way to stay involved with the Williams community over January.”

Milo Chang Jr. ’24 is spending this month — what would have been his first Winter Study — taking five Free University courses, including Intro to Functional Programming, The Queen’s Gambit: Chess 101, Getting That Bread During a Pandemic: Career Essentials 101, Trivia Night at “The Log” and League of Legends 1/0/1.

“I was just like, what do I do with myself for a month?” Chang said. “So I figured it would be interesting to learn new stuff or to have some sort of structure to my day so I wasn’t sleeping at weird hours.”

Ahmed said that because of COVID, few student groups requested money from FAST in the fall, so FAST had plenty of money to fund Free University. “We told instructors they didn’t have to worry about budgets and … we gave them a rough limit, but money wasn’t supposed to be an issue,” he said.

However, even with the large amount of money provided by FAST for Free University — slightly more than $10,000 — the WSU had to implement stricter budgets for each course due to the amount of supplies needed for each person who signed up, as well as the cost of shipping materials to everyone. Some courses, such as the drawing and bullet journaling courses, required crafting materials to be sent by mail to each student in the course.

“It wasn’t [initially] really an issue in terms of how much [money] they wanted to give us, but because of the volume of students who actually became interested, it became an issue later on,” Ahmed said.

Because of the overwhelming student interest for her course and the strict budget, Massey-Bierman had to drop about half of the students who signed up. “They initially told me that we had a $50 budget per student, and I was like, that will totally cover a ukulele — you can find one online for less than $30,” she said. “But after that I kind of had to figure out how many people I could actually purchase a uke for, and because of the increased interest this year, they had to decrease the budget, so I wasn’t able to buy everyone a ukulele.”

The YDSA’s course, however, has been taking place entirely over Zoom with no materials. Members of the YDSA organized their leftist education course by emailing speakers and meeting with each other over Zoom, and the course consists of a series of virtual talks led by experts on topics such as ecosocialism, anarchism, and activist organizing.

Since the leaders did not have to buy materials and deal with shipping anything to participants, the course can accommodate as many students as can join a Zoom call. “That is something that hasn’t limited the amount of participation,” McClain said. “I’m even inviting my friends from different schools because there’s no barrier to entry, because there’s no materials needed.”

Herrera said that despite the tighter budgets, instructors and students worked together to figure out different solutions. “I think that instructors really stepped up and thought really creatively of how they could not just use our budget, but also collaborate with other groups on campus, whether that was the Davis Center, or the music department in one case,” he said. “And then they also were able to ask students to step up and pay for their own materials if they were able to, and I think that was really equitable because some students did step up and offer to pay for other students’ materials.”

In the end, Herrera said that the WSU worked with FAST and the Office of Campus Life (OCL) to complete hundreds of shipments at the lowest cost possible so that as many students as possible, including international students, could participate in the various courses.

After the College transitioned to remote learning in March 2020 and continued with a hybrid model throughout the recent fall semester, many students are now used to learning online. Massey-Bierman said that teaching an online Free University course helped her to stand in the shoes of some of her professors.

For each class meeting, Massey-Bierman prepares a slideshow complete with different techniques, chords, and song lyrics for learning to play the ukulele. She and Toll each lead a breakout room so that students can meet in smaller groups and ask questions. “I guess it’s just kind of similar to normal class,” she said.

“Being a student in many different online courses at this point, I’ve seen how different instructors approach that,” she continued. “It’s really given me perspective on how hard it is for prof[essor]s to do everything quickly and properly on Zoom.”

Chang said that, despite feeling some inevitable Zoom fatigue, he has appreciated the energy the course leaders have been putting in. “I think the people teaching it have been really passionate about the topics they’re teaching, especially chess and intro to functional programming,” he said.

McClain, who is taking two Free University courses along with leading one, said she would definitely be interested in both taking and leading courses again. “I feel like I’ve learned a lot in the [two] that I’m taking and there were so many others that I wanted to take but didn’t get into,” she said. “I feel definitely like I’ve been empowered by the experience of organizing this. I am really proud of what we’ve been able to pull off so far, and now I know that I can do it and I could do it again if I wanted to.”

“I’m really proud that we were able to organize it and that all the instructors were able to launch their courses with success and without any major hiccups,” Ahmed said. “It was gonna be a major struggle from the get go, considering all the planning was remote and we never even met together … but ultimately, the program had pretty resounding success.”

Herrera, who has attended a few of the courses himself, said he has seen success beyond what he had envisioned. “In fact, many of these courses have gone overtime because the students want to continue to be there to embroider or play the ukulele, and there’s been a lot of conversation, … and I think that comes from the desire to be with other students, to speak with them and to get that sense of Williams back,” he said. “I’ve been really glad that I could provide that in some way.”

Herrera said he hopes to continue to expand the program even once many students are back on campus for the spring semester.

“I hope to continue to expand the program … so that students who are either doing a gap semester, studying abroad, or just live internationally can also participate,” he said. “I think that should be a standard every year and not just a COVID incidence.”