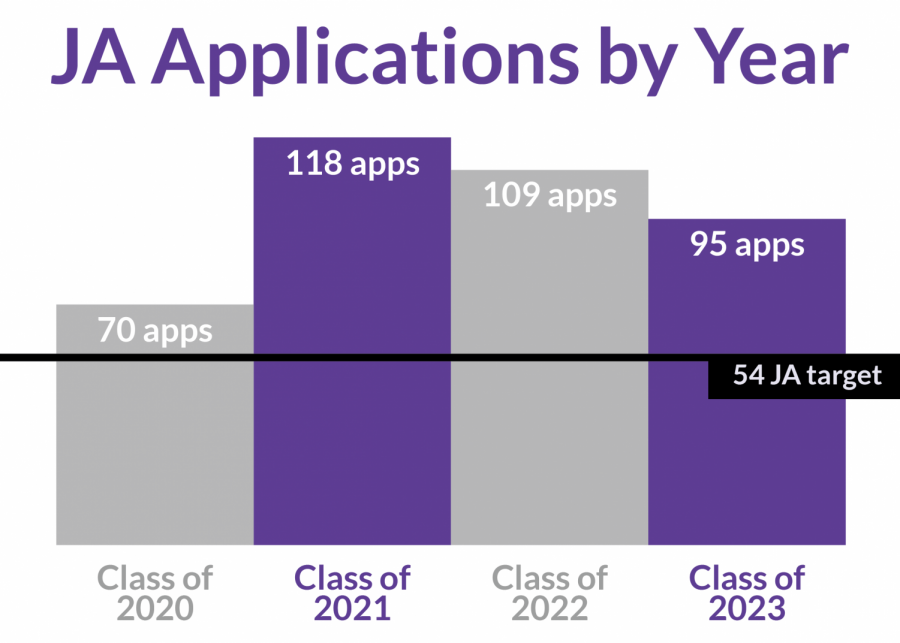 Dean of First-Year Students Chris Sewell ’05 said that, despite the slight dip, he is confident this year’s applicant pool is large enough to assemble a strong JA class.

“If we were at [70 applications] like we were a few years ago, I’d absolutely be concerned,” Sewell said. “[But] I don’t think mathematically we’re going to be at a point that we’re going to exhaust a list or be totally out of luck when it comes to people… I think we can absolutely get the number of JAs that we need.”

In a typical year, 54 applicants are selected to be JAs. Roughly 10 to 15 turn down the offer, Sewell said, and are replaced by applicants on the waiting list. Three years ago, when the number of applicants reached its lowest point, the JA Selection Committee (SelCom) was unable to assemble a full cohort and had to reduce the total number of JAs for that year. Sewell said he is confident that will not happen this year.

Sewell noted that the unique circumstances arising from COVID-19 may have caused fewer current sophomores to apply. “I’m sure there are some people who if we spoke to them [would say], ‘Because I don’t know what the fall is going to look like, I don’t know if I want to apply,’” he said. He added that other potential applicants may have been deterred by the possibility of remote entries, or by a desire to go abroad after a year of travel restrictions.

Inspired by the positive experience he had with his own JAs, Atlas Kaan Yilmaz ’23 had wanted to be a JA, viewing the role as “a fun way to give back to the community.” But he changed his mind this fall. While the primary reason was a desire to study abroad to improve his Mandarin, he noted that the disruptions brought about by COVID-19 were also a factor.

“Since this year is so weird in terms of everything, I’m trying to get as much normal on-campus time as I can,” he said. Being a JA might allow him less freedom, he noted, and would mean living in first-year dorms.

Lour Yasin ’23 similarly cited the uncertainty caused by COVID-19 as a major factor in her decision-making process. “I don’t know what it’s going to be like in a year, I don’t know how the entry system is going to look,” she said. “Some JAs I talked to talked about how it was a tad bit more alienating than it usually is, because you can’t really interact with anybody else outside of the pod, which is a bunch of freshmen, because of COVID.”

Additionally, Yasin said, the expectation that JAs enforce or at least encourage social distancing and mask guidelines among their frosh made her nervous about what her interactions with first-years would be like. “The relationship between the freshmen and the JAs became really murky this year,” she said, “and I think it’s [still] going to be next year.” Because of these worries, as well as her hesitance about  adding more work and stress to an already challenging year, Yasin ultimately chose not to apply.

“When you think about who’s applying to [be a] JA right now, they’re applying in a different world and Williams context than every other class before them,” Sewell said.

Initially, the deadline for the application was on Dec. 27, but SelCom — which consists of 19 sophomores, juniors, and seniors led by a nonvoting advisory committee of five JAAB members — later chose to extend it until Jan. 4. One of the reasons for the extension was to give potential applicants still traveling home and recovering from a difficult semester more time, according to Sewell. However, Sewell said that only a very small number of applicants took advantage of the extended deadline.

SelCom began interviews on Jan. 4, the same day applications were due, and concluded on Jan. 8. According to JAAB Co-President Surabhi Iyer ’21, who also sits on SelCom’s advisory committee, SelCom will continue to deliberate until as late as Jan. 29. The release date of final decisions is still to be determined.

“JA decisions are usually released at the same time as WEPO [Williams-Exeter Programme at Oxford] decisions so that students who are accepted to both programs have the same amount of time to consider both options,” Iyer wrote in an email to the Record. “Because we have to coordinate that with the Study Away office, it’s hard to specify an exact date for when decisions will be released.”

Despite the uncertainty, Sewell expressed optimism that this year’s class of JAs will be up to the task. “People who apply to be a JA really want to be a JA — it’s no question that people who apply have a desire to do it,” Sewell said. “I think we’ll have a strong JA class when all is said and done.”