Joe Thompson ’81, Director of MASS MoCA, on the past three decades 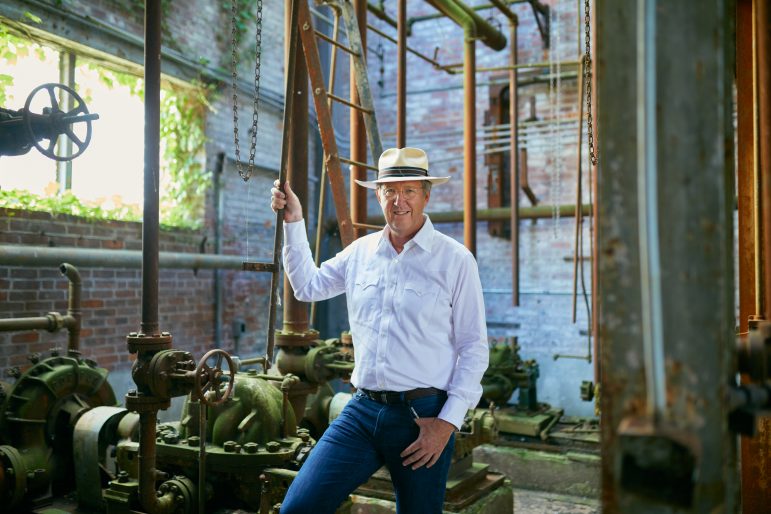 Joseph Thompson ’81, or Joe as most people call him, is most well known for having run the Massachusetts Museum of Contemporary Art (MASS MoCA) for the past 33 years, ever since helping to found the institution in 1987. His recent decision to step down from the role of director has been difficult to grasp for many who cannot conceive of a MASS MoCA without Thompson in command. Yet, funnily enough, the very subject of art history was not on Thompson’s radar until his junior year at the College.

“…I was an economics major and took a junior year abroad in Vienna, Austria, and fell in love with art and, more to the point, it dawned on me that people work in museums,” Thompson recounted in an interview with the Record. “I never really thought of it that concretely before, but just spending time in The Albertina and the Kunsthistorisches Museum, which is the main museum in Vienna, I spent a lot of weekends there, just saw people handling art and putting up signage and working.”

Post-Vienna, Thompson made the considerable decision to become a double major, which led to an art history-heavy senior year for him. “I essentially studied nothing but art history, and one or two economic classes my senior year … not really knowing what I was going to do, but I just fell in love with art and art history.”

Two of those courses were with Professor Thomas (Tom) Krens, and as Thompson notes, “that’s how I sort of began my career.” After taking a year off after graduation to work in the oil fields of his home state, Oklahoma, and spending six months in Berlin, Thompson made a short visit to Williamstown. “I stopped to say hello to Tom Krens … and he hired me to do a temporary job restoring a work of sculpture by the artist Robert Morris.”

This short stint at the Williams College Museum of Art (WCMA) ultimately led to being hired as a sort of jack-of-all-trades art handler, a position he held for three years. Thompson then went on to receive an MBA at Wharton and an MA in art history from the University of Pennsylvania, “and during that time, from ’86 through ’88, I was hired as a consultant by the college to help develop the idea for MASS MoCA.”

Originally planned as an adjunct of WCMA, the decision was ultimately made for MASS MoCA to become a stand-alone project as the process proved to be more complicated than anticipated.

“That happened at about the time that Tom, who was still director of WCMA, was hired by the Guggenheim. So he went off to New York City, and I was made the first director of MASS MoCA… after it was seemingly funded by the state.”

What Thompson alludes to here is the fact that, although MASS MoCA had supposedly won a grant for $35 million, it actually took about twelve years to get the money, a testament to the long ‘gestation period’ that the museum endured before finally opening its doors in 1999. “It was a long birth, the longest birthing period in the world!” Thompson joked.

The current MASS MoCA, however, is radically different from the one that Thompson and his co-founders originally conceived of. At its inception, the museum was intended to be a large industrial space for large industrial works of art – artworks that could live almost as happily outdoors as indoors.

However, during that long gestation period, which Thompson described as “purgatory,” many changes were made. The three main changes, as he put it, were one, that the idea of a permanent collection was exchanged for a rotating roster of temporary exhibitions; two, that their one asset – the buildings – would be exploited for rental space; and three, that the museum would become a space for the performing arts as well as the visual.

“The boundaries that people used to talk about between performing and visual arts were increasingly irrelevant to artists,” Thompson said regarding the latter change. “There was a really exciting fluidity made between media arts and performing arts and what we think of as visual arts. That fluidity required a completely different mindset as we thought about this place.”

By this, he meant the need for all of the various spaces that the performing arts require: stages, rehearsal facilities, fabrication facilities, workshops. Yet, what would the MASS MoCA that we know today be without performances? Especially for students at the College and the residents of Northern Berkshire County, one would think of the museum as a space for film or concerts just as readily as for visual arts. Thompson explained this paradigm by theorizing that “the closer you are to North Adams and Williamstown, the more you think of MASS MoCA as a performing arts venue. And the further away you are, the more you think of it as a museum.”

“While it took a long time and I was rather stubborn about making those three changes, I thank our lucky stars that we did. Because there’s this magic kind of compounding effect that happens … between the performing arts and visual arts.” As Thompson puts it, one of the secret ingredients of MASS MoCA is the cross-over that happens between those two worlds.

In the search for a new director, in fact, Thompson noted that the recognition of this magic is particularly important to him, along with someone who brings a fresh and different point of view. Most importantly, however, Thompson reminded me that MASS MoCA was built on a promise that it would lead to an economic resurgence or recovery in North Adams, and while he has certainly achieved that to some extent during his tenure, he admits that “…retooling from an industrial legacy to a post-industrial future was painfully slow.” MASS MoCA under the new director, he hopes, would continue to play a role in this hard, slow work.

It is hard to imagine MASS MoCA in any other location than the one it is in now, and this is perhaps the greatest allure of the museum: the patina of history and time and labor that the factory setting embodies. “It’s one of the reasons that we came to North Adams,” Thompson said. “These rough-hewn, simple, side-lit buildings invite intervention and change, and have a kind of warmth to them that is sometimes lacking in a perfect white-walled, pristine, hermetic space.” Indeed, thinking about the products that have been produced inside of these walls – from fabric to electronics to, now, contemporary art, there is a way in which one can almost feel the accumulation of meaning from the past century.

“You go from hardware to software, from a world of real to a world of irreality,” says Thompson. “What products do people take out of this place now? You know, if we’re lucky, a new thought and a smile.”

It seems that his own departure is more bittersweet in comparison, although liberating in a way. In response to the question of what’s next for him, Thompson admitted that he hasn’t allowed himself to think about that over the past 30 years, “…but I’m beginning to think about it now. I’m all of a sudden waking up and looking out, and there’s a big world out there, so we’ll see.”