‘It’s tough being in the middle’: Ephs on the NESCAC Coalition of Student-Athletes of Color 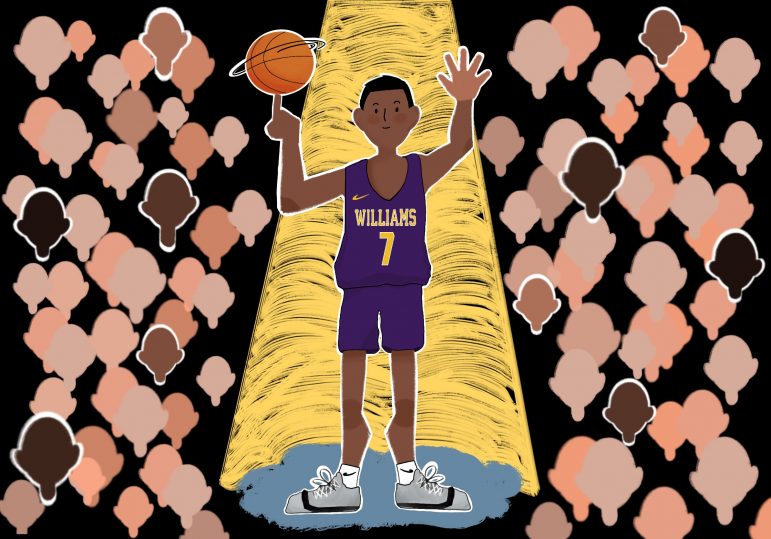 Singleton-Eriyo is one of the five Ephs who have been appointed to NESCAC’s newly formed Coalition of Student-Athletes of Color (COSAC) as a part of the conference’s effort to promote diversity, equity and inclusion. Prior to the coalition’s establishment, NESCAC schools did not have a single unified organization to promote the welfare of student-athletes of color.

Many representatives from the College found that racial justice movements of the past year in the wake of the killing of George Floyd have acted as a catalyst to an ongoing process.

“The events that happened this past summer have been terrible, but I feel like they’re almost like a blessing in disguise because it forced us to come together and come to that table,” said Say Say Rivers ’22, who plays on the football team. “It forced everybody else [including] white people to also work in lockstep with us, to actually come to the table as well … [It] lit an even stronger fire under our butts to actually start implementing things and moving towards things … It’s like you make the most out of terrible situations.”

Georgia Lord ’22, a member of women’s soccer, said she believed that the COVID-19 pandemic has similarly brought positive changes to diversity efforts in college sports. “I honestly think that COVID on my team has helped form conversation surrounding race, just because … we had more time to have these discussions and we could meet virtually,” she said. “So we had a lot of mini-group discussions within our team … We got the ball rolling.”

The formation of COSAC means that student-athletes of color now have established lines of communication across schools to discuss shared experiences as well as to confront underlying issues that affect the league as a whole. During weekly meetings, coalition members formulate and share proposals, learning from individual experience what works and what does not.

In seeking to promote wellness for student-athletes of color, COSAC works alongside existing student organizations at the College that share the same goals. One such organization is the Gaius C. Bolin Chapter (GCBC), which four student-athletes of color founded in 2018 as part of the Student-Athlete Advisory Committee. “I know that right now, GCBC is working on a proposal for the athletic department, which just focuses on recruiting, diversity training for coaches and diversity training for students,” Lord said. “And that came from a meeting with COSAC.”

The student-athlete versus non-student-athlete divide can be seen within communities of color as well, so for many of the representatives, creating a community of student-athletes of color is as important as the other work the coalition has undertaken. “They might resent you for being in that space, or you might not feel as comfortable reaching out to them because they don’t necessarily understand being a student-athlete,” Rivers said.

As a result, COSAC has provided a space for student-athletes of color who are caught in between the two social realms. “At a school like Williams too, where so much of the social life is surrounded by athletics, and then this kind of tension between students of color and social life, and [it] not being necessarily an inclusive environment — it’s tough being in the middle, too,” Singleton-Eriyo said. “So it’s been cool for me to have the privilege to talk to so many other kids at different NESCAC [schools] and hear they’re dealing with the same things there, and it’s not just here.”

Unique personal experiences within their sports and teams have given each representative their own perspective on the most pressing issues that face student-athletes of color. “I think it’s just representation to be honest,” Lord said. “Especially on women’s soccer, I don’t think it’s a huge issue, but I do know that most of the people who have left our team are student-athletes of color. So obviously there’s something happening there, where we don’t feel super comfortable and we don’t feel like that’s our space, whereas other people on the team do.”

For Rivers, the difficulty with these obstacles lies in their innocuous nature. “Say, like on a basketball court you’re reffed differently because you’ll see a white person yelling and they’re saying like, ‘Okay, they’re just really fiery; they’re passionate.’ And then you see a person of color doing the same thing … and they’ll get a technical for doing so. You’ll see that sort of discrepancy,” he said.

The lack of support for student-athletes of color who juggle sports with academics and  extracurriculars points to a broader issue, where these student-athletes are asked to prioritize one aspect of their identity over another. “I think it’s about intersectionality, so it’s not like you’re just a student, but you’re a student of color,” Singleton-Eriyo said. “And you’re not just a student of color, but you’re also an athlete of color. I think socially, it’s tough — because teams are so white, you’re kind of caught in between social groups … There are also moments where I’ve had to pick and choose between going to practice or joining an affinity space for women of color … I feel like students shouldn’t have to [choose between the two].”

This lack of infrastructure frustrates Cristina Young ’22, a member of women’s track and field, who finds the NESCAC administration’s unwillingness to take an active role in supporting student athletes of color disheartening. “I will call out [the NESCAC] administration on doing this,” she said. “Sometimes they’re kind of like, ‘Tell us what you need,’ and then kind of stop there, or they’re like, ‘Check on each other and be the support for each other.’ Then I’m like, “No, if you want to see a better retention rate for your student-athletes of color, students of color in general, you’re gonna have to provide the resources.”

Despite the slow movement of NESCAC’s diversity efforts, most representatives agree that COSAC is a step in the right direction. Some hope that the coalition can expand beyond supporting students-athletes of color to also include student-athletes of other marginalized groups including low-income, LGBTQ+, and first generation student-athletes.

“I think one of the greatest things about GCBC is that it’s not a tunnel vision goal,” Young said. “I think it would be kind of tone deaf to be like, ‘We only want to raise the numbers for student-athletes of color.’ … If you’re not bettering the Williams community in multiple ways, I feel like it’s almost not beneficial to put all your eggs in one basket because we don’t really know what racial diversity means in that sense.”