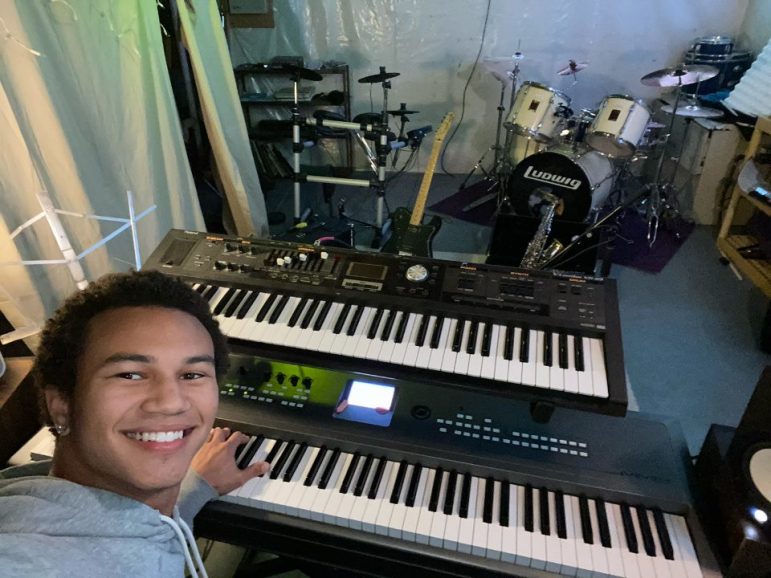 Joel Nicholas ’23 composes electronic music from his studio at home.

“I picked up music by ear, pretty much,” student musician and composer Joel Nicholas ’23 said. “In my old house in Rochester … we had this old, rusty little piano, and not too far from there we had a radio and so sometimes I’d be dabbling on the piano and the radio would be on and I’d try to figure out how to play what was on the radio on the piano and that helped my ear training.”

Since learning to play the piano by ear, Nicholas has come a long way. While continuing to play the piano, he picked up saxophone in middle school and now runs a children’s choir at his church. He also composes electronic songs, using the software Logic, that fall into a wide range of genres.

Nicholas recently uploaded a track to his Soundcloud called “4 LOK,” on which he worked with his older brother, Desmond Nicholas. “4 LOK” is tagged as R&B and Soul on Soundcloud, but Nicholas described it as falling into many different genres, including trap, rock and alternative.

The five and a half minute-long track features heavy electronics with a synth pad outlining different minor chords that dynamically fade in and out. Just about halfway through, the bass gets a solo melody, which gives way to a solo melody on the keys, and then the two electronic instruments join together for a climactic minute. The final minute of the track features a more mellow electronic piano solo, which Nicholas described as the more classic part of the tune.

“I do like to explore with different genres,” Nicholas said of his music. “I’m not really one to put things in boxes. I just want to take what I’ve experienced and put it all in.”

Nicholas credited much of his knowledge of electronic composing to “MUS 110: Electronic Music Genres, a Creative Approach,” a course he took as a first-year student with Professor of Music Ileana Perez Velazquez.

“I learned a lot from that class, not just with software but with being in the studio and engineering songs,” Nicholas said. “Last semester I was in the studio very often, just learning from [Events, Classroom and Studio Support Specialist] Patrick Gray and learning how to engineer songs live.”

Nicholas studied remotely this semester from his home in Buffalo, N.Y., but that did not stop him from practicing and composing. He spent many hours this semester renovating his home recording setup, which includes microphones, amps, a drum set and MIDI keyboards.

“Since I’ve learned a lot of things from being in the studio, I’ve been able to use the live instruments that I have here at home and capture clean recordings from here,” he said. “I’m still learning every day but I’ve been able to make a lot of progress recently.”

Conveniently, Nicholas’ older brother, Desmond, is also a musician, so the two have worked on a number of tracks together under the name “Nicholas Deux.” In 2018, they released a 10-song album on Soundcloud called “Nicholas Deux, Volume I.”

“It’s cool having him around and having someone to talk to who understands you musically,” Joel said of his brother. “The projects that we work on together, they’re interesting listens. Some of the songs we worked on together, some are just his and some are just mine.”

Though both are musicians, they play different instruments and have different focuses. Joel plays the piano and saxophone, while Desmond plays bass, drums and trumpet. “I feel like it was really smooth the way that worked out because I’d be on the keys and one of the best accompaniments, besides maybe a horn instrument, is bass or drums,” Nicholas said. “And so we played a lot of gigs together, and when we did that, it always worked out fine.”

Along with being a musician, Nicholas is on the football team at the College. He said that being both a musician and athlete has helped him to understand many different perspectives.

“In high school, I was never in one social group, and so that helped me be more open-minded to a lot of things,” he said. “I’m more accepting of people and where they come from.”

Additionally, Nicholas said that being invested in both music and football helped him to lead a more balanced lifestyle. “That not only taught me how to manage my time but it also … helped me value being a more well-rounded person,” he said. “There are those who can lock themselves into a practice room for eight hours a day and drill things and become really great on the piano, but I feel like my skills are better used in a more well-rounded fashion…. If I skip some workout days, that might translate into how my playing performance is that day or week.”

Nicholas is currently planning on majoring in music and sees himself having a career in music. While he doesn’t know exactly what job he wants to have in the future, he said he is on track to work in many different departments within the music realm, such as a sound engineer, composer, studio pianist or music teacher.

“Whether it’s being a teacher or being a full-time sound engineer, as long as music is somewhere in my realm … then I’m satisfied,” he said. “I’ll major in music, and I enjoy the classes. And learning more about what I’m passionate about is probably the best thing.”