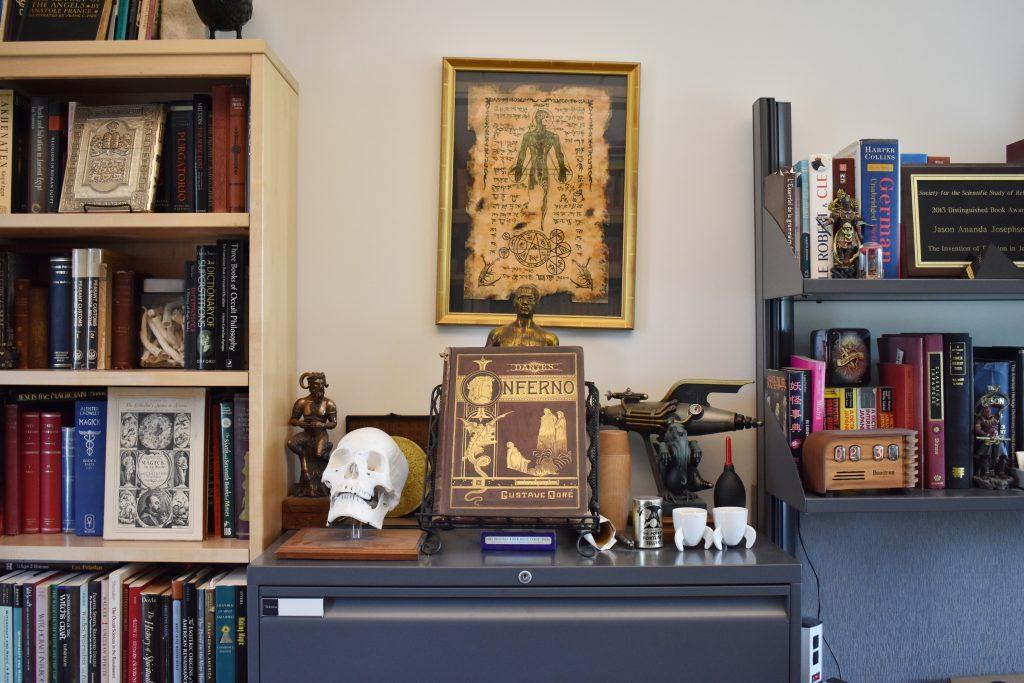 Unlike students who may spend little time in their dorms, professors often spend hours doing work in their offices. But students and professors share one thing in common: both like to make their rooms feel like home.

Coming from the bright halls of Thompson Physical Labs, it takes a few seconds to get used to the dimness of Professor of Computer Science Duane Bailey’s office. “I never turn these lights on,” he said, “So these light bulbs will never get changed.”

Bailey sees his office as a meeting place for students; he has six chairs around his desk, some of which are from his father’s office at Amherst. Old technology – including a rare magnetic memory board –  lines the tops of the chalkboard to the right and bookshelves to the left. Puzzles, many of them his own, clutter the table. His desk is a blackboard as well. “In the Williams [way of] thinking, this is the log,” he said, referencing the often-touted James Garfield quote, “The ideal college is Mark Hopkins on one end of a log and a student on the other.”

There are photos of Bailey’s ancestors and photos of influential thinkers, like mathematician John von Neumann. But there are also projects from former students, all signed, and children’s drawings as well. There’s a clock  – analog – in the corner because “not everything in a computer science department has to be a computer.”

Across Route 2, on the quiet sixth floor of Stetson Hall, you can find Professor of Latina/o and American Studies Mérida Rúa’s office.

There are two windows here; one is glazed, but the other offers a perfect view of Paresky Student Center, allowing the soft glow of the sun to shine in. On most days, this is the only light source, as Rúa likes to leave the lights off.

There’s a rug, on loan from Lecturer of English Paul Park, that offers a splash of color to the room with its vibrant red, orange and white patterns. There’s also a soft pink couch, Rúa’s favorite part of the office. It makes the students taking her tutorial feel more comfortable, and it also comforts her, as she can sit back with a cup of coffee and immerse herself in a book. “That is the best couch to read on,” she said.

By the couch is a bookcase with Rúa’s “intellectual formation,” or books from when she was an undergraduate. On the walls around her computer, there are pictures that remind Rúa of home: a photo of the skyline of Chicago with signatures from family and friends, a signed poster of Piri Thomas, an advertisement for a play produced in Chicago and a painting of three kings. “I’m marked by my own influences, cultural and location-wise,” she said, smiling.

Nearby in Hollander Hall, Associate Professor of Religion Jason Josephson Storm has an office that is a lot to take in at first glance. There are stacks of books (his “to read” pile), jam-packed bookshelves, a view of Sawyer Quad and Storm himself, working away on his computer.

Large windows allow natural light to flood the room, though he does wish there were more of it. “If anyone ever wanted to knock this wall out and put in a window for me, I would love that,” he laughed.

The bookshelves are crammed with dictionaries, books for his classes, texts for his research and his own published works. “I read in 10 languages, so I have stuff from a range of languages in the office,” Storm said. “So all of that amplifies the space.” Other things he has collected include a tube clock, figurines, Japanese artwork from his grandmother and, his proudest possession, the 2013 Distinguished Book Award.

The centerpiece of the room is a beautiful 19th century copy of Dante’s Inferno. Surrounding it are various cult symbols, some serious, others more playful: a khatvanga, a statue of Cthulhu, a Chinese medicinal figure and a model ray gun. There’s a dedicated space for Storm’s musical interests as well. This includes a poster of Joe Strummer, the guitarist for The Clash, a “pretty righteous, politically punk rock group,” and a sleek black guitar, though Storm can’t play the latter in his office.

The wide mix of things in Storm’s office reflects the varied interests in his life. “I’ve accumulated a bunch of things based on different areas that I’ve studied,” he said. “I’m pretty eclectic.”

As each professor’s office shows, it may be worth students’ time to get to know them beyond their teaching – you never know what you might find out about a professor simply from sitting in their office.