One in Two Thousand: Aidan Dunkelberg ’22 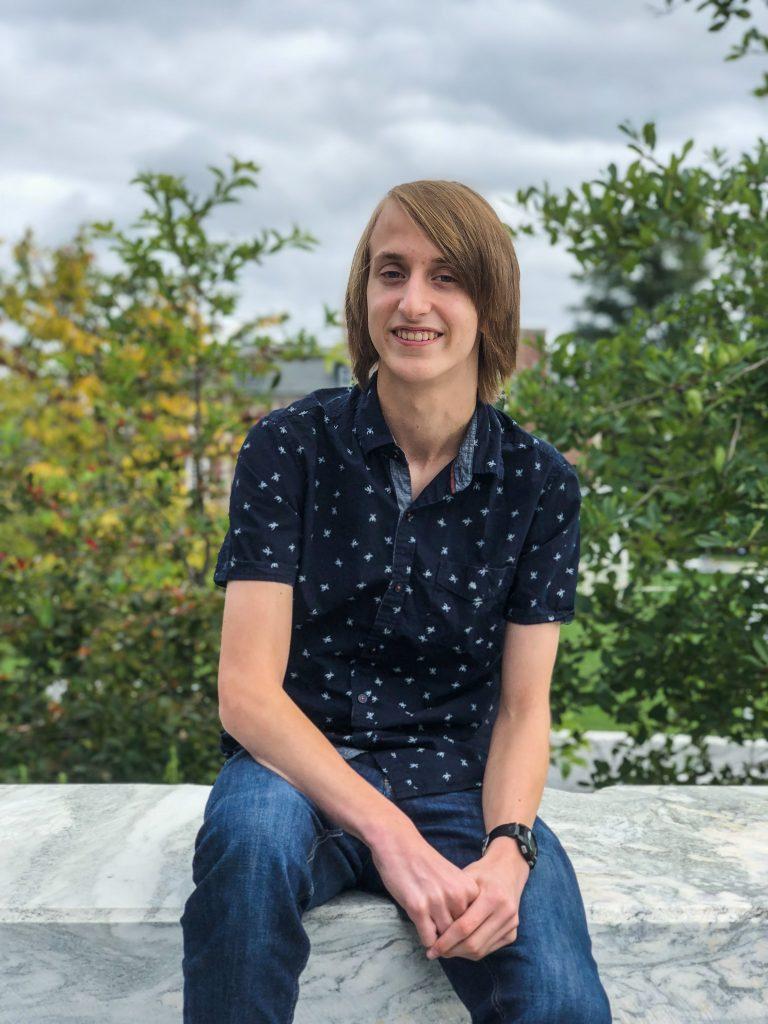 When I first met Aidan during his audition for Frosh Revue, I was instantly struck by his zaniness and his relentlessly positive energy. Last week, I caught up with him about his life in Mississippi, his violin and mandolin skills and his interest in nude modeling.

So what was it like growing up in Mississippi?

I lived in Mississippi for 17 years, and I haven’t yet really figured out what I think of Mississippi. I wanted to get away because I wanted to experience what I think of my state through the eyes of people who don’t know about it. I lived there my whole life, but I never really felt like I was from Mississippi because my parents weren’t, and also because my parents didn’t go to church, and they were in the university community, which consisted of a group of people who acted differently from others. I grew up internalizing a lot of stereotypes about people around me that people up here don’t really have. For instance, the stereotype of uptight, rigid, moral churchgoing people.

You also played the violin throughout your childhood. How did that impact you growing up?

Well, for a long time it didn’t. That’s one of the things about Mississippi that I kind of regret: there is just not that much musically. I was lucky to have a place near me where I could take lessons, but there just weren’t camps or activities or all the other things that people from more urban areas could have access to. But I decided that I wanted to try to become a professional violinist – teaching,  probably, because that would be the easiest for me to do. Starting junior year, I shifted gears and I really started trying things that were beyond the level that I’d gone before.

Have you ever done any performances in the local area?

I did a few. The first gig I had was at a farmer’s market. I was probably 12 or 13 the first time I did it, and it was a three-hour set, which is pretty long. Of course, no one’s paying attention to you because they’re all just buying their vegetables. But it was actually a lot of work. I’ve never played classical music for a bluegrass style or western country event. Then, I decided in my sophomore year to do an actual concert, which I still have the posters for. It was really fun, but it was also more of the same – me playing fiddle music. The coolest part about it was that I was brave enough to ask the director of the arts council if she would let me do it. This past summer, I got asked by her if I would do a show, and I said, “Okay, but I’m not going to do the same thing.” I decided that I was going to try to start writing songs. I had about a month between when I accepted the concert and when I was going to do it. In the intervening time, I went and wrote five new songs. That process was pretty nerve-wracking, because it was the first time that I’d written new material that I actually cared about, and also the first time that I was performing it to people whom I didn’t know or trust.

You were also called out by President Maud Mandel for your mandolin skills, right?

Yeah, that was unexpected. I was hoping that I would become known around campus as the “mandolin guy.” Sometimes I take my mandolin outside at night on campus. I think last Friday I just went over to the marble blocks outside of Paresky and just played for half an hour. Mostly because it gets me in a better place, and there’s also this added benefit that people will come up to me and say, “Hey, is that a ukulele?” and I’ll be like, “No! It’s a mandolin, thank you very much.” The reason I was called out was that I wrote about mandolins in my college essay, which means that some advisor to Maud read over my Common App, which is not surprising, but also, I assume that means that somebody in the admissions office knows what a mandolin is.

I would hope so – it’s not that obscure!

I heard you’re also an aspiring poet. What do you write about?

My friends back home always made fun of me for writing a lot about Iowa. That’s where my grandmother’s from, so I would spend a week or so every summer and every winter there. I kept, basically, this image of a whole ton of cornfields, which is most of Iowa. In a way, it’s kind of nice and symmetrical and very poetic. It gets into a lot of my poems, whether intentionally or accidentally. If you read some of my poems, you would probably think that I was from Iowa. It’s the one place that I really know and that I have clear and distinct feelings about. In Mississippi, there are so many things, and there are so many feelings that I have about it that are mixed. It’s a huge effort to parse through that and actually write something that’s kind of meaningful. Iowa’s easy. It’s just a ton of corn.

Speaking of corn, you’ve been a vegetarian since you were born. What was that like?

I’m actually fudging that a little. From when I was born to when I was about five, I was pescatarian, so I ate fish. The family story is that apparently I said, “But mom, isn’t fish meat?” because we’d basically been calling ourselves vegetarians, so then we just stopped eating fish too. I don’t remember that. It’s weird because if I say to people that I’m vegetarian, people ask, “Why? Why are you a vegetarian?” That question’s always a little bit of a shock to me, because I’ve never really conceptualized the alternative. I’m just very used to vegetarianism, and it’s not even about anything. It would just be too much of an effort to try to change. If I started eating meat, it would take probably two or three years before I would get to the point that I would look at a restaurant menu and not be scanning for things that don’t have meat in them. It would be too hard to stop to make it worth it, even if meat was the greatest thing in the world – which it may be! I would not be surprised if it were far greater than I could ever imagine. But I’m still okay living in this world without it.

I’ve been told that you’re also interested in nude modeling. Why does that appeal to you?

Well, it pays $14 an hour, which is three bucks above minimum wage, so I feel like I’m selling myself a little bit short. I feel like my talents are worth more, but I gotta take what they’ll give me. But seriously, it’s a job in which I don’t have to do anything, and it’s somewhat frightening, and I want to push myself to do things that I wouldn’t think I’d be comfortable with. Hopefully I’ll become comfortable with it by the time I actually have to do a session. I had one scheduled for Thursday, and then they cancelled on me. Or actually, I cancelled on myself because I had a midterm at that point. So it’ll probably be a while, which is sad, but oh well.

I have this strange desire to not finish this interview without saying something incriminating, just because I want to distinguish myself, but that’s probably not a good idea.