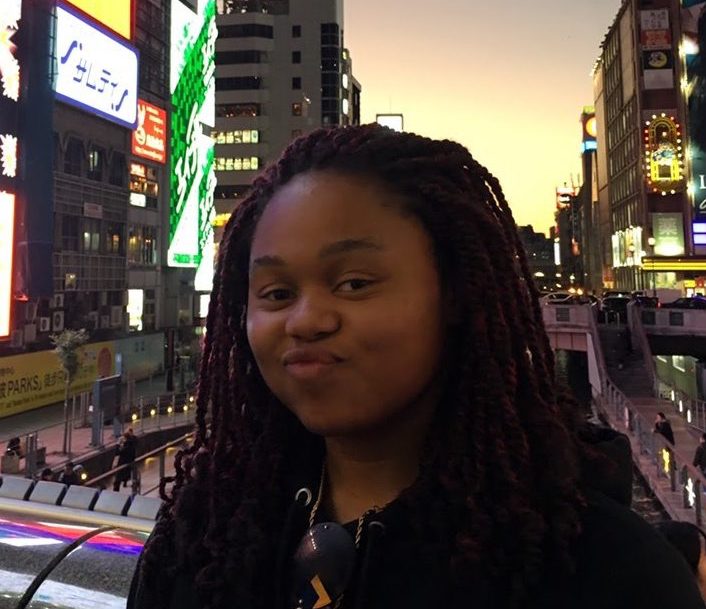 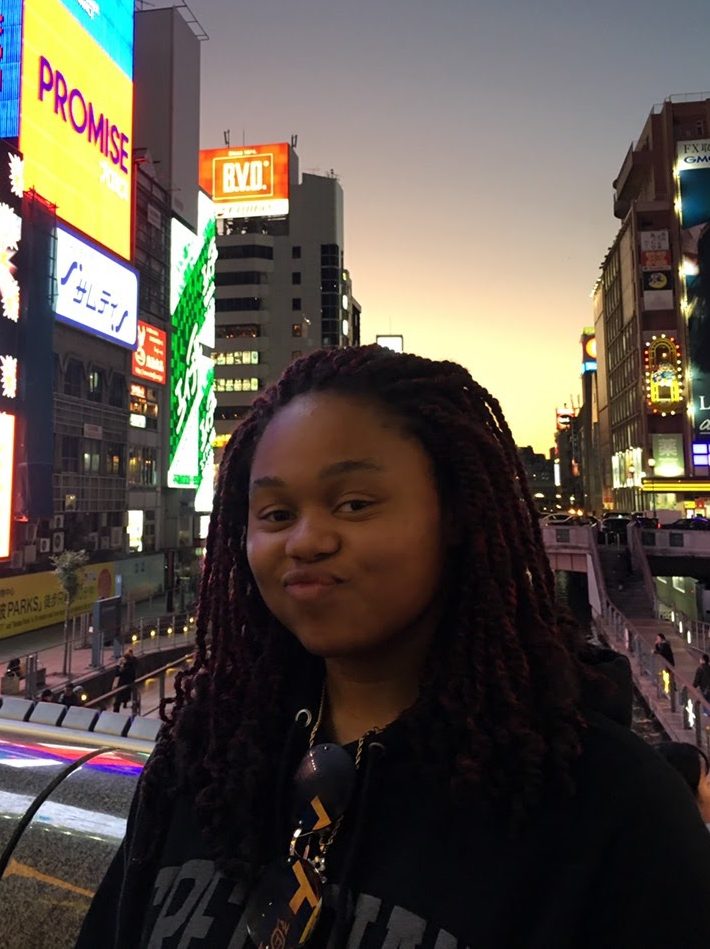 Each week, we randomly select a unix from a list of all current students at the College for our One in Two Thousand feature. As long as the owner of a selected unix is willing to be interviewed and is not a member of the Record board, that person becomes the subject of our interview. This week, the script in R chose Raquel “Rocky” Livingston ’21, who talked about her many nicknames, her love for Sankofa and her adventures in Kyoto, Japan. This interview has been edited for length and clarity.

I hear you have a bunch of nicknames that are constantly changing. How did that come about?

So it kind of stuck. And then when I got into college … I was in SHSS [Summer Humanities and Social Sciences Program], which was fantastic — love all the people, all the SHSS homies — but one of my friends wanted to tell me that the washing machine was done or the dryer was done or something like that. And she put in the group chat, “Oh, hey, Rochelle, the washing machine’s done.” I was like, “Uhhhh, who’s going to tell her my name’s not Rochelle?” [Laughs.] So it really started from there. My friends would call me Rochelle, and it kind of stuck, and then there was a GroupMe poll: “What’s her name? Raquel or Rochelle?” Everyone, except for, like, two people, voted Rochelle.

After that, it was either Rochelle or anyone started with an “R,” which included “Raccoon,” “Range Rover.” And then when I got into Kofa [the step team], one of my friends at a performance called me “Rotisserie Chicken.”… Yeah, I have a lot of them. And, you know, I think it’s cool. People are like, “Do you prefer Rocky or Raquel?” And I’m like, “I like them both equally. Just don’t call me Rachel.” Rachel’s where I draw the line because my parents on purpose did not name me Rachel. So that’s it, but pretty much anything else. You know, as long as it’s not offensive, I think it’s hilarious.

Well, you say people ask you, “What do you prefer?” And I have to write the headline for this article. So, fill in the blank: “One in Two Thousand, colon … ”

Or I could do “Raquel, quotation marks, Rocky.”

Yes! Yes, that would be good. I generally like my name — it’s just that I like them both.

Can you tell me about your experience studying abroad?

Yes, I always love talking about study abroad. So, I did a semester in Japan last fall. I lucked out — I didn’t go in the spring, which was, whew. But I went in the fall, so I had the full experience. I’m really grateful for that. It was just fantastic. I was in Kyoto, which is a little south of Tokyo. I stayed with a host family. I took a lot of trips. I also went to Korea for a week to see my friends who were studying abroad there. And overall, 10 out of 10, would recommend. The food? Amazing. The people? Super nice. I picked Kyoto in particular, because it’s different from Tokyo in that it was the original capital. So that’s where all the cool temples and old history is. I went to a lot of temples and shrines. I filled up a book of stamps — because you get stamps at different places you go — so I should have a whole book of those, which is at least like, I don’t know, 50. A lot. I went to a lot of temples and shrines, partially because I had a class about Japanese art history, so I went on a lot of field trips with my prof. But then just also on my own because what else am I gonna do?… And I also took an environmental science class, which was super interesting — I’d never taken one before. It just compared environmental issues in America and Japan and different attitudes toward the environment. I just learned a lot about preconceived notions, I had, like, “Oh, yeah, I’m in Kyoto, the nature here is beautiful. It’s so clean. There’s no trash anywhere.” And actually understanding what people actually feel about nature there — do people actually care? Is that a conscious thing that’s happening? And what we came to is, it’s really not.

I learned a lot and I grew a lot as a person. I’d never traveled abroad by myself that far ever. Flying by myself — that was new. Well, I did go before. I went for Winter Study, actually, the same year, in January. So that was actually my first time in Japan, which actually prepared me a lot. But overall, great experience. I loved everything. And I ate a lot of food.

That sounds awesome. What’s one funny story from abroad?

I was leaving class, I think, and I was getting on the subway to go home. And I was getting on the subway and this girl ran in with her friend. And she got in, but the other girl got caught in the doors. I got so scared. I was like, “Oh my god, she’s gonna die.” She wasn’t gonna die, but I was scared… I asked her if she was OK in Japanese. And not even — she wasn’t like, “Oh, I’m good” or anything. Her friend looks at me, and she’s like, “Pera pera,” which means, “Are you fluent? Are you fluent in Japanese?” And I was like, “Your friend just got decked by these doors! Why are you concerned about whether or not I can speak Japanese?” [Laughs.] That one really cracked my host family up because they were just like, “Yo, we wouldn’t have cared at all!”

What got you into learning Japanese?

I actually took it on a whim. I took French all through high school, all four years up to AP, and then I was like, “I don’t want to do this anymore.” I knew I still wanted to continue language studies in college because I just like linguistics and just languages in general. And I did some self-studying of Korean in high school, because I liked Korean dramas and stuff like that. But you can’t take Korean here unless you’re doing critical languages, and you can’t do that as a freshman. So I was like, “OK, well, I can’t take Korean as a freshman. So what am I gonna do?”… So I just took it on a whim, Japanese 101, I had some friends from SHSS also taking it, so I was like, “I’ll have friends in it.” And, definitely, best decision I made. I didn’t expect to be a major at all. I knew I wanted to study abroad. So that was definitely part of it. But for the most part, it was just like, “OK, I like Japanese food.” And, I don’t know, I don’t really watch anime or anything like that. So it’s just, new languages!

How was it balancing that with being abroad?

Pain. [Laughs.] I couldn’t take any computer science while I was abroad, obviously, because of my program. And, you know, that was okay. But now I’m suffering because I had to double up on comp sci last semester in the spring, and I’m doubling up this semester, which is also super painful. And I didn’t start the major until my freshman spring, so I basically went two whole semesters not taking any computer science classes, which, you know, obviously is painful. I said “pain” a lot, but you can tell: This is a painful major. But, you know, it be like that sometimes. And the department’s definitely grown on me in the past couple years. So it’s worked out, luckily. But yeah, it was kind of rough for a little while, definitely feeling it sophomore year. And I was feeling it junior spring when I came back from abroad because I just forgot how to code, like, completely. I hadn’t coded anything. So it was a tough transition, but we did it.

Changing gears: Do you believe in extraterrestrial life?

Oh, for sure. There’s got to be something. It can’t just be us. [Laughs.] I just can’t — I just can’t believe that. I was really into astronomy when I was a kid. There’s the Chabot Space and Science Center — we used to go every other week with my parents. I used to be really into space and stuff. And I’m just thinking, there’s no way there’s just us because I think the universe is just so huge. And there’s so much we just don’t know, just because, you know, we’re people, we’re just humans. We’re all tiny little bubbles. And I really think there’s something out there. Whether or not that’s for us to know about, I don’t know! Maybe we just don’t need to know — that’s totally cool. But I think there’s something else.

When you’re on campus, what’s your favorite extracurricular?Kofa! That’s all I do. I live, sleep, dream, eat Kofa. [Laughs.] I don’t eat Kofa. But, you know, I do a lot of it. The step team has definitely been my rock in terms of extracurricular activities. This year, I’m co-drill-sergeant with my homie Lyza [Berg ’21.5]. We’re trying to make it work remote, but it’s working out. And it’s honestly been, I think one of the best ways I’ve spent my time at Williams and one of the coolest ways I’ve made friends, especially with upperclassmen. The people who have come before me are just absolutely amazing people. It’s a great community, and stepping is really cool. My dad used to do it in college as well — he was in a frat — so it’s cool that I’m doing it in some other capacity even though we don’t have sororities and fraternities. I also danced a lot in high school, and just outside, and it’s just a great way to stay active. I used to play sports, but I don’t anymore, so it’s a nice way to still exercise and get my body moving. I like to move a lot. I don’t know why, but I always have to move. So having something — a physical outlet — has been really nice for me, I think in terms of also just handling, balancing school and life and stuff. But yeah, Sankofa. They’re my homies. That’s my life right now. Shoutout to my team.