On Spring Street, a successful fall and a foreboding winter 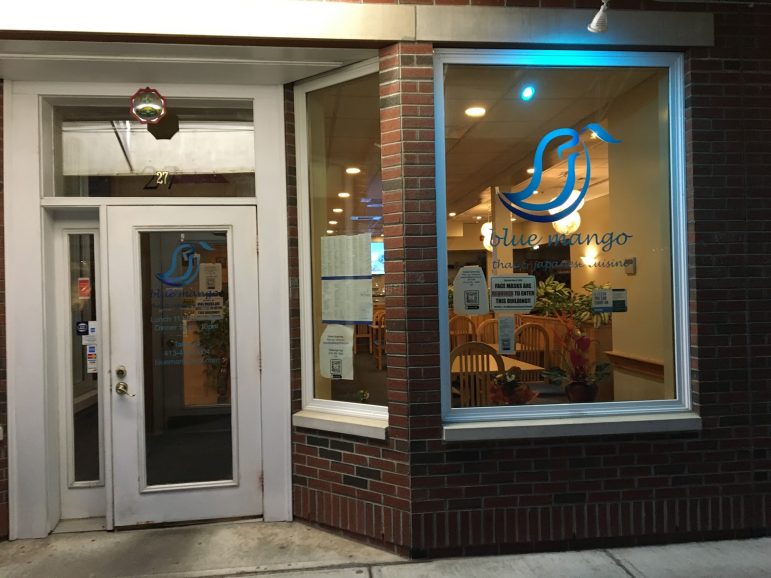 Spring Street businesses like the Thai and Japanese restaurant Blue Mango benefited from the safe return of many students to campus this fall. (Jack McGovern/Williams Record)

Spring Street businesses like the Thai and Japanese restaurant Blue Mango benefited from the safe return of many students to campus this fall. (Jack McGovern/The Williams Record)

As most in-person students left campus for the semester over the weekend, small businesses on Spring Street reflected on a fall that saw many students safely return to Williamstown, bringing a much-needed boost to local stores.

In a series of interviews on Saturday and Sunday, owners, managers and staff at Spring Street stores said that the COVID-19 pandemic continued to pose its share of challenges, as tourists are not traveling amid the pandemic. But they said that students had supplemented their business and conducted themselves conscientiously, with near-universal compliance on mask-wearing and social distancing in their stores. They looked ahead with uncertainty to the winter, when only a few students will remain on campus and tourism is expected to be low.

Mookharin Khajornchaisak, a manager at the Thai and Japanese restaurant Blue Mango, said that middays during the week were slower than normal for eateries on Spring Street because professors and students were not meeting up to go out for lunch. But she said students continued to order take-out dinners at high rates, especially on weekends between the hours of 5 and 7 p.m., which she described as a hectic time.

“It’s great when all the students come in, but personally I wish they’d come in spread out because it just gets too crazy at one time,” she said. She added that, as a former student herself, she understood that students do not always wake up until later in the day.

As cases rise nationwide and in Massachusetts, Khajornchaisak said the stay-at-home advisory issued on Nov. 2 by Gov. Charlie Baker has not affected business much. Blue Mango now stops taking orders at 9:30 p.m. in accordance with the new restrictions, which limit activity after 10 p.m.

While Khajornchaisak said the restaurant still has their staff working full time, she said three former employees went home to Thailand over the summer. She expressed concern for late December and January, particularly since the College ended its voucher program for students on campus over winter break to eat at Spring Street restaurants.

“After Thanksgiving, I know a lot of students will be going back home, and some of them stay on campus until December,” Khajornchaisak said. “So we are going to have some business, but we don’t know how that will play out because usually they do the voucher systems during the winter break.”

The College then decided to partner exclusively with the Williams Inn for lunch and dinner after Dec. 21, though students will also receive a Visa gift card that they can use at any other Spring Street restaurant. The Williams Inn, which opened last year, is owned by the College.

“[The Williams Inn has] set up a nice program where students can stay and eat their meal at the Inn or take their meals to go,” St. John said. “[The Inn] will have a link to a student specific website that will include a spot to make reservations and students can view the menus daily.”

Despite the end of the program by the College, Khajornchaisak conveyed her thanks for other College-funded groups that have ordered in bulk from Blue Mango throughout the semester, including the Chinese-American Student Organization (CASO) and Tara Watson, professor of economics, and Susan Godlonton, associate professor of economics, who have awarded a $50 gift certificate to the restaurant every week to the winner of a lottery of participants in their COVID-19 Impact Survey.

Sophie Grudin, a receptionist at the Clip Shop, said that the regular client base of the salon is mostly locals, including faculty and staff at the College, but students provide the extra walk-in business. While the salon now requires customers to make appointments by phone, Grudin said the testing program implemented by the College has made scheduling appointments easier and helped to protect staff.

“Right now, when I answer a phone call and it’s someone who’s not a regular client, I have to ask them have they been traveling? Have they been tested?” she said. “When I know it’s a Williams student calling, I can just be like, ‘I know you’ve had a test in the last week,’ so it gives us some peace of mind.”

Grudin said that the salon stocked up on large quantities of personal protective equipment and cleaning supplies when it first reopened over the summer and has continued to invest heavily in public health since. In adherence to state guidelines, the salon now only allows one client in the store at a time for time-intensive services like color processing.

“Obviously that’s going to make an impact, but we’ve still been relatively busy,” she said.

In the meantime, Grudin said she was “so impressed” with the behavior of students. Before campus reopened, she said that many town residents feared that students would go to parties or go off campus and bring the virus back to Williamstown. While she knew the scientists at the College would be well-informed on the risks and she believed the administration would be strict, she said the commitment to mask-wearing by students “really blew me away.”

“I’ve seen students at 8:30 in the morning on a Saturday walking towards the horse farm, no one is within a hundred yards of them, and they’re still wearing a mask,” she said.

Kara Mears, the co-owner of The Log at Ramunto’s, echoed the sentiment that students exceeded expectations in abiding by the rules.

“We did not have one issue with a student,” she said. “We were very impressed with their behavior, their respect. They followed every rule. We never had to ask anyone, any student, to put [on] their mask [or] social distance.”

She described the business from students as “very positive” and “somewhat better than expected,” although she emphasized like many others that no one knew exactly what to expect in terms of sales before the semester started.

Mears said not having students back until February will be a challenge for The Log, as the winter is already a slower time of year on Spring Street. She said the pizza place will “most likely” adjust its hours at some point during the season and focus more on delivery and pickup.

“We assume that’s what’s probably going to be necessary and now we’re just going to hang in there and get to February and hope that the students come back,” she said.

While she said The Log was “greatly impacted” by parents not coming to visit students over the fall and athletic events being cancelled, Mears said she supported the decisions the College has made.

“I think they’ve made decisions that are for the best interests of the town as a whole, and that’s kind of all we hope,” she said. “Unfortunately, sometimes certain decisions have had harder impacts on our business, but it’s not really about our business right now. It’s about the health and safety of everyone.”

Grudin underlined the ways in which the decisions of the College combined with its geographic location have helped both business and public health in the town.

“We’re the Purple Bubble, they use that a lot, and in this case, it really kind of helped,” she said. “It was a protective bubble.”