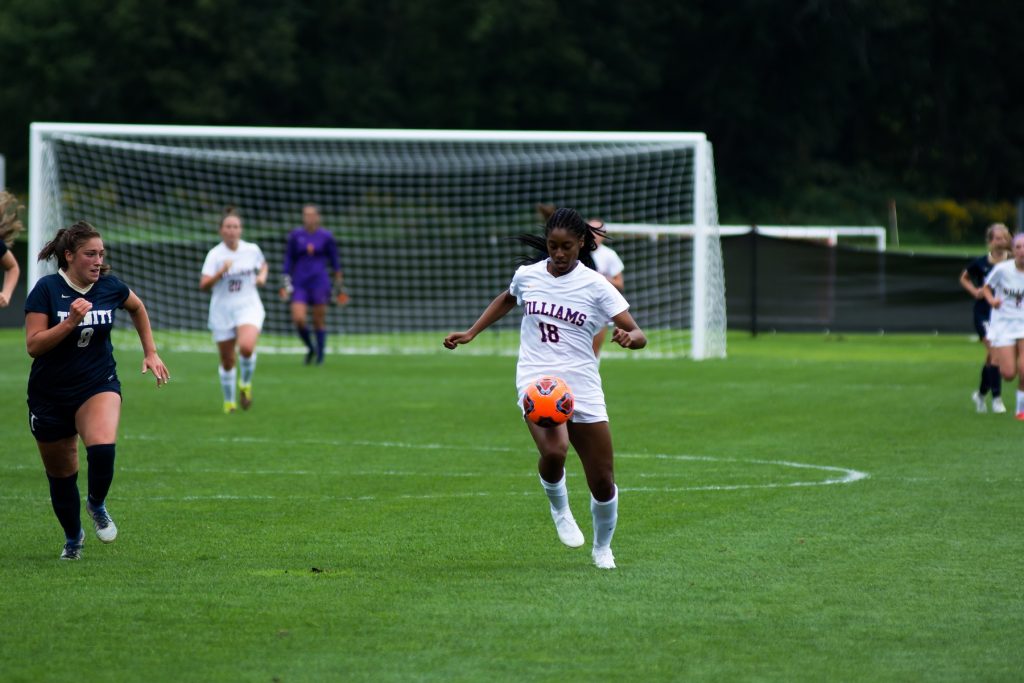 On Sunday, Sydney Jones ’21 scored the first goal in the women’s game against Castleton, helping her team win the game 2-0. Photo Courtesy of Sports Information.

Women’s soccer (8-0-1, 5-0-1 in the NESCAC) defeated Castleton 2-0 and Connecticut College 1-0 this weekend. With these wins, the Ephs continue to lead the NESCAC alongside the undefeated Middlebury team.

On Sunday, the Ephs shut out Castleton 2-0 on the road.

As has often been the case, Sydney Jones ’21 scored the game winner at 46:10, her seventh goal this year. After failing to convert in the first half, the Ephs were aggressive early in the second half. A stealthy Aspen Pierson ’21 worked her way to the left-side of the penalty box before sending a cross to Jones. Jones wasted no time, touching the ball once and then slamming it into the goal with her left foot.

In the 65th minute, Madison Feeney ’19 added to the lead with her first goal of the season. After midfielder Victoria Laino ’21 delivered a perfect through-pass in between the Castleton defense, Feeney collected the ball and then buried it in the middle of the net.

Active play at midfield by the Ephs smothered the Spartan offense. In the first half, all three shots on goal by the Spartans were longshots, which were easily handled by goalie Olivia Barnhill ’19. In contrast, Williams dominated possession and created an abundance of opportunities within Castleton’s penalty box. The game was scoreless at the half, with several spectacular saves by Castleton’s goalie Loren Henderson, including one in the 34th minute when Rain Condie ’22 broke free of Castleton’s backline and got a shot off from point-blank range. Henderson, however, made a diving stop to keep the game tied.

The Ephs broke through immediately in the second half when Jones scored. After Feeney scored at the 65th minute, the Ephs substituted their starters and earned their eighth win of the season.

The Ephs tallied 32 shots on goal – their highest this season – and shot 10 corner kicks. The Spartans finished with three shots on goal.

Barnhill played 72 minutes and had two saves in the shutout. So far, she has allowed only two goals in nine games this season and was recently named NESCAC Player of the Week.

Whitney Lincoln ’20 replaced Barnhill for the final 18 minutes but recorded no saves.

On Saturday, the women held onto the lead against Connecticut College after scoring one goal. With only 20 seconds remaining in the first half, Condie received a throw-in from forward Sarah Scire ’20. After tapping the ball past her defender, Condie dribbled briefly along the right-side before shooting from 10 yards outside the penalty box. The ball sailed over the head of Connecticut goalie Sarah Williams and found the back of the net, giving Condie the eventual game winner and her first collegiate goal.

The Ephs had several chances to score in the first half. At 19:10, Laino collected a blocked pass, cut to her left and drilled a shot towards the left side of the net, but her attempt was blocked by a diving Williams. At 22:08, Pierson got a shot on target off a free kick, but Williams caught it again. Finally, Condie’s goal at 44:45 secured a 1-0 lead heading into the second half.

The Camels developed their attack by sending long passes over the Eph’s backline. The tenacity of Connecticut’s Kat Norton and Emmy McGoldrick allowed them to win possession deep in Williams’ territory.

Several of their attempts looked good, but three miraculous saves by Barnhill kept the game scoreless. One save was particularly impressive: a skirmish at the edge of the penalty box kept the ball hidden from Barnhill.  Connecticut’s Kelly Brigham poked it forward towards the right-side of the goal, but Barnhill leaped through the air and intercepted the ball, preventing a 1-1 tie.

With only a minute remaining in the second half, the Ephs moved the ball to the corner to drain the clock, assuring a 1-0 victory.

The Ephs finished with a slim advantage in shots on goal (13-12) and corner kicks (4-3). Barnhill made seven saves in the shutout, raising her save percentage to 0.941.

The women will host Farmingdale State on Saturday at 12 p.m.