Some construction projects near completion as others drag on 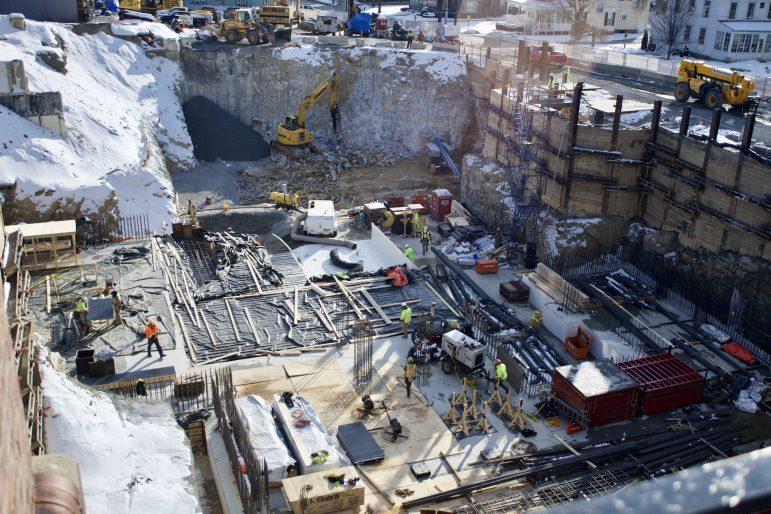 The science center’s North Building will open in 2021 and house geosciences, psychology and math and statistics. ANIAH PRICE/PHOTO EDITOR

The science center’s North Building will open in 2021 and house geosciences, psychology and math and statistics. ANIAH PRICE/PHOTO EDITOR

The Williams Inn, the new Garfield dormitory and the Towne Field House near completion shortly as other construction projects remain underway around campus.

The construction of the Williams Inn at the base of Spring Street, which began in September 2017, should be complete this summer, according to Senior  Project Manager Michael Wood. Scheduled for completion on July 4, the 58,000 square foot inn will contain 64 hotel rooms, a restaurant and sizeable event space. While construction noise and blocked access from Susie Hopkins and the Oakley Center to Spring Street will persist, these inconveniences should   diminish in severity, Wood emphasized. “As construction comes to a close on the Williams Inn, impacts to students will subside,” he said.

The other major construction project on campus, the North Building of the Unified Science Center, should be complete in early 2021, accodring to Senior Project Manager Diana Randall. This building, for which construction began in June 2018, will house the geosciences, psychology and math and statistics departments. Excavation of the site is now nearly complete. Laying the concrete foundation will begin over the next year, after which the building’s steel structure will be erected. The project saw an unexpected interruption on Feb. 25, when high winds dislodged several protective window covers. According to Randall, however, this event did not cause any significant challenges to the overall effort. “Although the winds did temporarily disrupt some activities on the North Science construction site, they do not present any significant setbacks for the project,” she said. Randall also emphasized the work being done to minimize general construction noise but said that “with any construction project, noise is often a byproduct.”

The College is also constructing a new dormitory in the location of the now-demolished Garfield House. Construction started in June 2018 and, according to Senior Project Manager Bruce Decoteau, “The structure is essentially complete. Work is progressing on the interior with mechanical and electrical trades.” Construction is expected to be complete by July 2019, and the 40-bed dormitory should be open to students by the fall semester.

Construction is also underway for a wall ball wall, a 16-by-40 foot wall that will be used for lacrosse and field hockey practices. Funded by a $55,000 contribution from a donor, according to Coppola-Wallace, this project is scheduled for completion on March 31.

Additionally, renovations are ongoing to a number of existing structures, including St. Anthony Hall, Driscoll Dining Hall, Fort Hoosac House, Morgan Hall and the buildings of the Davis Center. The reopening of the field house, which was scheduled for March 8, has been delayed by approximately a week, according to Coppola-Wallace. In Morgan Hall, construction will replace the entire roof by December 2019, though work has not yet begun. “At this point in time, the design plans are 100 percent complete, the project has been placed out to bid and the college has begun contract negotiations with a perspective contractor with the expectations that a contract will be signed in the near future,” Senior Project Manager Jason Moran said.

St. Anthony Hall, which houses the Center for Development Economics (CDE) Graduate Program, is also under renovation. “The overall goal is to transform the building to better suit the needs of the [CDE],” Project Manager Theresa Sawyer said. This project encompasses a transformation and expansion of the dining hall, classrooms and administrative areas, as well as improved plumbing and lighting systems. At this stage, demolition is nearing completion, and rebuilding has started. The project will likely be complete by August 2019, according to Sawyer.

Driscoll Dining Hall is being renovated to improve accessibility, which will include the addition of an elevator and renovation of restrooms and entrances. Construction will likely begin in late May and conclude by mid-August.

Fort Hoosac, which houses students in the Williams Graduate Program in the History of Art, is also being renovated and renamed Fort Bradshaw. The renovation will add an elevator, student rooms and bathrooms, and will include an upgraded kitchen. The project will begin in June 2019 and should be completed by July 2020.

Lastly, the College is assessing the three buildings of the Davis Center – Hardy, Jenness and Rice House – as well as Chandler House, to determine the need for future renovation or construction. “We are currently in the early stages of the project, with the building committee currently focusing on the overview of the project and the requirements that we will set forth in hiring the design team for the project,” Project Manager Scott Henderson said. As this project is still in very early stages, construction is not scheduled to begin until fall 2020, and any construction or renovation will not be complete before spring 2022.