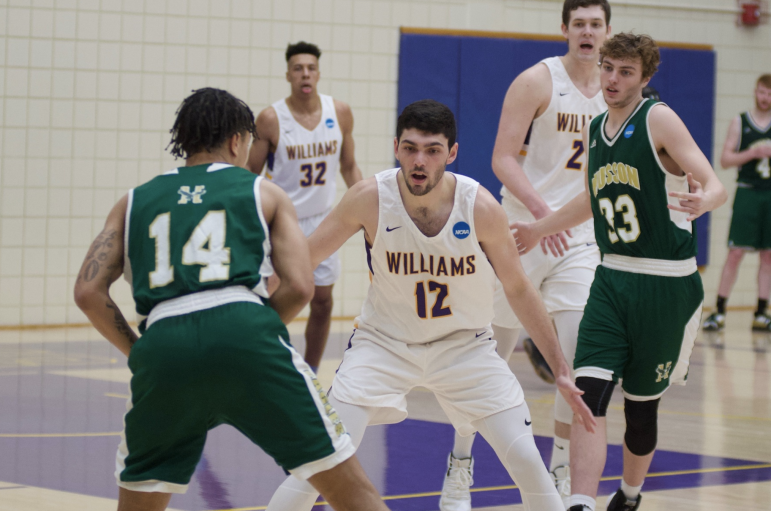 Henry Feinberg ’20 scored an emphatic dunk off a missed 3-pointer in the second half against Husson.

Henry Feinberg ’20 scored an emphatic dunk off a missed 3-pointer in the second half against Husson. Photo courtesy of Sports Information.

No. 19 men’s basketball (22–6, 6–4 in the NESCAC) opened its NCAA tournament last weekend with double-digit victories on back-to-back nights in Chandler Gymnasium. The Ephs advanced to their sixth Sweet 16 in the last 10 years, drawing a matchup with No. 2 Whitman.

The men first faced Husson on Friday night. After both teams struggled with cold shooting in the first half, the Ephs scored on their first six possessions of the second half to take a commanding lead. Shooting a blistering 70 percent from the field in the second half, the Ephs had four players score in double figures, led by James Heskett ’19 with 19 points on 6-for-11 shooting. Matt Karpowicz ’20 netted 17, Bobby Casey ’19 finished with 16 and Kyle Scadlock ’19 added a dozen. Scadlock also collected a game-high 10 rebounds.

Minutes after halftime, Heskett drilled a 3-pointer in front of the Ephs’ bench to extend the lead to double digits, where it would remain for the rest of the night.

The play of the night came off a missed 3-pointer when a one-handed putback jam from Henry Feinberg ’20 brought the crowd to its feet and secured a 52-34 lead with 14:28 remaining. A 3 by Jovan Jones ’22 with just under six minutes left increased the margin to 31 points, 77-46.The men cruised to an 86-60 victory.

DJ Bussey led the Eagles with 13 points, while Justin Thompson and Justin Martin each grabbed a team-high six rebounds.

On Saturday, the men faced Gwynedd Mercy, which had defeated Plattsburgh State in its first-round game. In a dominating performance from start to finish, the men triumphed by a final score of 90-56.

“Gwynedd Mercy is a tremendous team that plays really, really hard,” head coach Kevin App said. “I thought our defensive commitment in the first half really set the stage, and the confidence we built from the second half [on Friday] carried over.”

The men used their height advantage to stifle Gwynedd Mercy’s offense in the first several minutes. On the offensive end, Scadlock scored a quick 5 points inside to help the Ephs build an early 7-0 lead. After a turnover by the Griffins, Heskett drilled a 3 from the left corner to put the Ephs up 10-0 and force a timeout.

Apart from a 5-0 Gwynedd Mercy run after the timeout, Williams maintained total control throughout the half. In one notable sequence, Scadlock and Heskett threw down two-handed jams on consecutive fast breaks. Shortly after, Casey, Heskett, and Mickey Babek ’20 hit three straight 3-pointers to give the Ephs a 25-7 lead with 8:20 remaining in the half. The Griffins would not reach double figures until Jaylen Henry hit a jumper from the short corner with 5:39 left. Heskett’s fourth 3 of the half, however, gave the Ephs a 44-19 lead at the break.

Desperately needing something to change, Gwynedd Mercy came out in the second half in a fiery full-court press. Though the Griffins forced three turnovers in the opening four minutes, the press also allowed the Ephs to find several open looks on the other end, including a dunk by Karpowicz and a corner 3 by Feinberg.

“They changed up the defensive looks a lot,” said App. “Every time they made a change, it took a possession or two for our guys to figure it out.”

The Griffins kept battling and attacking the rim, however, and as the Ephs struggled with the press, a Courtney Cubbage layup narrowed the Eph lead to 56-37 with 14:11 to play.

With the score 61-41 and just 10 minutes left, the Ephs fired off a quick 8-0 run to balloon their lead to 28. The run included back-breaking consecutive 3s from Casey and Heskett. Casey nailed a pull-up 3 with 6:30 left to extend the Eph lead to 76-44, sealing the game’s outcome.

“It was great to have all the seniors out on the floor towards the end,” App said. “It’s one of those nice moments that we’ll all remember.”

Cubbage led Gwynedd Mercy with 18 points and 5 boards. Dunham added 13 for the Griffins.

The men, who made the Final Four and finished in third place in the nation last season, travel to Clinton, N.Y., to play Whitman on Friday at 5:30 p.m.