In Trivial, Quizbowl is not all fun and games 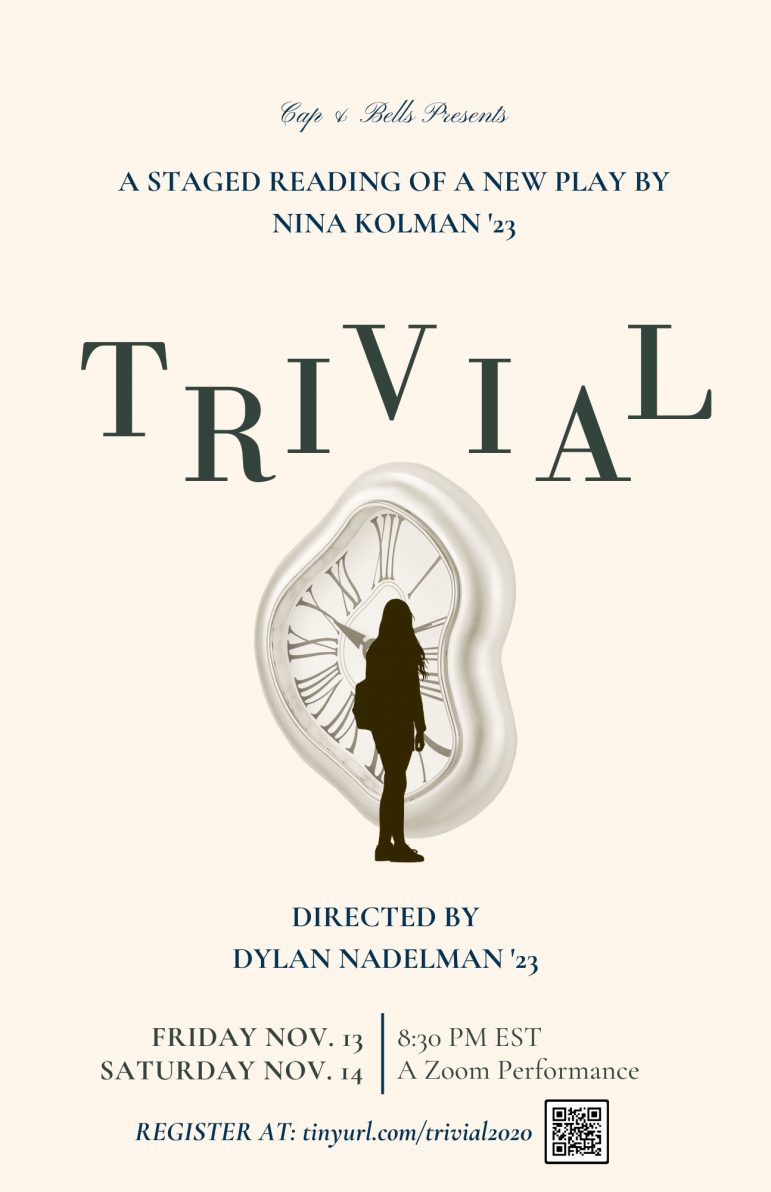 It was the best of times, it was the worst of times, it was the age of wisdom, it was the age of foolishness, it was late May, and the ballroom of the Hilton Atlanta teemed with hormones and promise. Six hundred and sixty two middle schoolers had touched down the previous night, and a few rubbed jet lag out of their eyes as they snacked on granola and reviewed flashcards, preparing to spend the next three days fighting tooth and nail for glory. Some would return home disgraced. Some would be crowned with laurels. I would compete my heart out, then forget I’d ever been there.

Trivial, a play by Nina Kolman ’23 which Cap & Bells presented as a staged reading this weekend over Zoom, unearthed memories of the 2014 Middle School National Quizbowl Championships I didn’t know I still had. Like the five teammates of Trivial, I also spent my after school hours answering questions about obscure symphonies and Greek philosophers. Like these teammates, I also had a controlling captain obsessed with winning. But though Trivial certainly filled me with nostalgia (I spent an hour and a half on “Protobowl,” a Quizbowl website, after the show ended), you don’t have to know what a “tossup” or a “power” is to enjoy the excellent direction, stellar acting and well-written world of this production.

Trivial follows five high school Quizbowl players at John Quincy Adams High (JQAH) — the wound-up captain, George (Chris Van Liew ’23), the star scorer, Claire (Mati Rogers ’24), the goofy jock, Charlie (Lea Elton ’24), the girl he’s crushing on, Juliet (Vanessa Silva ’23) and the overlooked alternate, David (Shizah Kashif ’24) — over the course of one school year. As the JQAH team works to make it to Nationals, they navigate college applications (George is gunning for Yale, but does not get in), the friend zone, and, in Claire’s case, uncertainty about whether she actually enjoys the game she’s proved so good at.

I was prepared to find the Zoom format annoying, but director Dylan Nadelman ’23 does a remarkable job making Zoom feel like a stage — just as characters would in a theatre, actors enter and exit the Zoom, making it possible to portray scenes of two or three people. Trivial’s actors manage acting on screen like pros, and the believability of their performances makes it easy for an audience member to become invested in their nerdy world.

Trivial works especially well over Zoom because there isn’t much action in the play — the world of John Quincy Adams High unfurls mostly through dialogue between pairs or triplets of characters. This dialogue sometimes feels a little awkward, but the awkwardness accurately captures the way super-smart people talk — sometimes their jokes are a little forced, sometimes they miss the mark. One of the great things about Trivial is that its scenes of dialogue are punctuated every so often by a tournament, so the audience can test their Quizbowl chops by trying to beat the team to the buzzer (the only one I got was 10 Things I Hate About You). And it’s great fun to observe how the team we’ve gotten to know in private interacts in public — one of my favorite bits of the show, and a testament to Kolman’s sense of observation (a crucial skill for any writer), is watching the different ways each character gives their name to the scorekeeper before the tournament begins (uptight George spells G-E-O-R-G-E; slacker Charlie just says “Charlie, like how it’s usually spelled”).

What I felt Trivial lacked, however, was a sense of interrelated stakes — each character’s success, in love or college or in Quizbowl, certainly mattered to them (this was clear through excellent acting by Rogers and Van Liew), but their successes or failures didn’t seem to depend on each other in a way that made their storylines overlap. George, for example, says that if the team doesn’t win, “he won’t get into college and his life will be a failure.” This is presented as hyperbole, but the Quizbowl I experienced was full of such dramatic conundrums — one girl I knew endured severe emotional abuse from a Quizbowl captain for years because he claimed she would never get into college if she chose to quit the team. What if George’s Yale acceptance actually did depend on Claire buoying him to nationals? Her choice, if it tangibly affected another character’s goal, would certainly become more complex.

Claire and George are the most intense characters in Trivial, and the most compelling because their conflicts are the best developed. Other characters, including Juliet, feel more loosely sketched — though Juliet appears in a ton of scenes, we learn virtually nothing about her by the end of the play save for her pizza preference, science smarts and eagerness to flirt with Charlie (while their plotline was cute, it played out over one too many scenes in my opinion).

David, too, is a little underdeveloped for a character who ends up delivering Trivial’s main message. What if David had gotten into Yale, and George hadn’t? Or even, what if George had told the team he had been accepted, and David knows he’s lying because David attended admitted students day? This is where I thought the play was headed when David mentions to Claire that he is attending an “admitted students day event” — it turns out he’s actually going to Duke.

I only mention these ideas because I know — or sincerely hope — that Trivial will eventually transition from a Zoom reading to a staged play. When it does, I’m certain Kolman, Nadelman and Trivial’s cast will easily reproduce the same tender, small world they’ve created around Trivial’s Quizbowl team, a world filled to the brim with feeling and life. But trivial concerns can beget real consequences, can turn even the most precious of people — for the sarcastic know-it-all camaraderie of Trivial admittedly feels a little precious — into less perfect versions of themselves. I quit Quizbowl in ninth grade after my captain screamed at me for missing a question. Later that year, a kid on my team overdosed on caffeine while studying for nationals. Trivial is mostly fun and games, but the game (as Trivial begins to explore) is often far from fun, and I’d love to see a play that goes farther with that. Trivial is wonderful for what it is, but thrilling for what it might yet become.