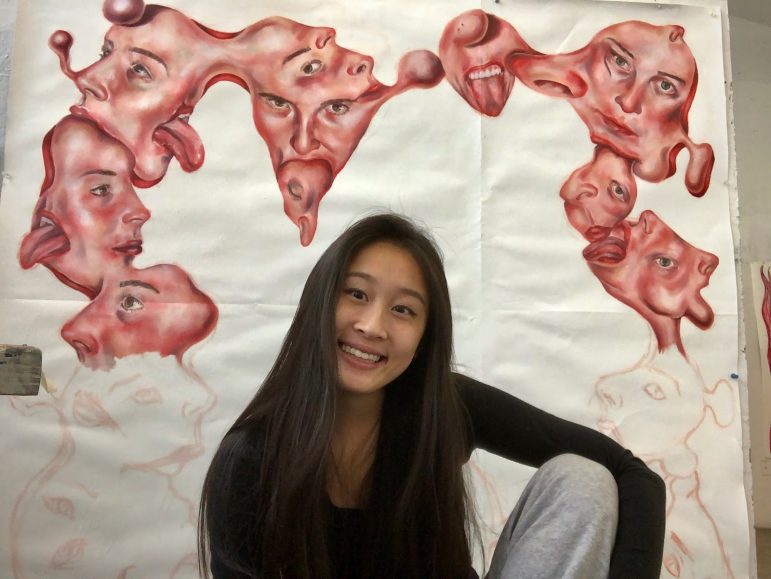 Helene Ryu ’22 has recently started experimenting with themes of intimacy in relation to others. (Photo courtesy of Helene Ryu ’22.)

I don’t recall exactly how my view of Helene Ryu ’22 changed when she started painting distorted portraits of her own mutilated face. For most of her friends and family, though, Ryu said her more vivid pieces tend to come as a bit of a shock. “It surprises them that a lot of the stuff that I make ends up being kind of dark and violent,” she said. “That’s not really how my personality usually comes across — or at least, my performed personality — so sometimes there’s some dissonance.”

She’s right: I’m not sure I ever would have pegged Ryu, whom I know to be sweet and unassuming, as the type to produce such viscerally disturbing content. She said the studio is one of the few places where that side of herself comes out, and she acknowledged somewhat sheepishly that her typical style of self-expression is more muted than most other artists at the College. “Sometimes I almost feel like I’m not quirky or weird enough to be considered an artist,” she said. At the center of this triptych is a piece about eating disorders, based on Francisco Goya’s “Saturn Devouring His Son.” (Photo courtesy of Helene Ryu ’22.)

Ryu’s attitude embraces contradiction: While the fact that her art makes people uncomfortable is something she’s distinctly proud of, she said that’s also what she dislikes most about her work, and she isn’t always sure what to make of her fascination with her own disfigured form.

“I do a lot of stuff with the human face, and the figure, and my face, manipulating it and fucking it up and combining it,” she said. “I just like taking things and people apart and putting them back together, but I guess other people find that weird and violent.”

It would be easy to infer vanity from Ryu’s series of self portraits, which often include dozens of reproductions of her face melting into and erupting out of each other; after all, she confessed, art-making is “my way of being selfish.”

But she pushed back against the idea that her pieces point to some kind of self-obsession. Instead, Ryu gave a more pragmatic reason: she’s not sure she could bring herself to manipulate someone else’s body to that degree. Working instead with images of herself allows her to play with a real and recognizable human figure without offending her own sensibilities.

“There’s something very ironic about destroying your own body, your own face, but taking the time and care to spend hours and hours doing it,” she said. “It’s a weird way of loving yourself, because you’re spending so much time crafting it, perfecting it and making it honest.”

In that way, Ryu is obsessed, but more with the process than the subject; her fascination is with “the brushstrokes rather than what the brushstrokes are creating,” as she put it. She didn’t hesitate to call her dedication to the process of art-making an obsession: “it’s such a taboo, or hyperbolic word, and people misuse it all the time,” she said. “But honestly, I have no other way to describe the reason that I stand on my feet for 10 hours straight.” Ryu prefers to work alone in the studio, focusing for hours at a time in a way that she said she rarely can do with other activities. (Photo courtesy of Helene Ryu ’22.)

Ryu said one of the things she appreciates most about visual art is the work necessary to produce it, and the freedom she has over what goes into a painting. “I love the labor that goes into art, and I love that it’s on my own terms,” she said. “If you put dozens of hours into a painting or drawing, it’ll stay that way forever.”

To more fully explain her relationship to the art-making process, Ryu revisited her high school career as a competitive classical cellist. Back then, she said, drawing was more of a hobby, and although she loved making music, she hated performing. “It just felt unfair,” she said. “You could practice something for hundreds of hours, and then fuck it up in front of an audience, and then that’s what they remember, and that’s what you remember.”

Visual art, by contrast, allows Ryu to make those hours count— and to invest them according to her own wishes. “I liked the control I could have, where if you draw a line, it would stay there until you change it,” she said. “I saw it as a way of bottling time, where the hours you pour into your work are always visible, and you can always tell how much time someone’s put into something.” Ryu’s paintings often play with distorted images of her own face, which she said she likes to “take apart” and “put back together.” (Photo courtesy of Helene Ryu ’22.)

Ryu tries not to take short cuts, and relishes the way painting allows her to make — and fix — mistakes, which were fatal in her cello-playing days. She said painting brings out a patience and focus in her that she can’t spare for much else. “Once I get in the studio, and once I feel myself move the paint around, my mind kind of blinks out,” she said. “Suddenly, it’s 3 a.m., and I’m like, ‘Oh, my God, I haven’t had water in, like, seven hours.’”

When Ryu is in the studio, she strongly prefers to work solo. Again, a contradiction: “When I’m making art, it’s one of the times when I feel least lonely,” she said, which is ironic considering that loneliness is one of the major themes of her pieces. Another central theme, meanwhile, is intimacy and care, both for herself — which she focused on last year — and for others, a project she is currently exploring. Although Ryu said it took some time before she became comfortable working with images of people close to her, she’s recently started to incorporate other people’s visages into her art. (Photo courtesy of Helene Ryu ’22.)

Some of her paintings deal more specifically with darker or more inexpressible experiences. Ryu pointed out a few works that allude to depression, and said her imitation of Goya’s “Saturn Devouring His Son” references eating disorders. She said those pieces allow her to convey “all these really deep feelings that nobody can express, or that you can’t really talk about.”

It’s no surprise, then, that some of her work comes across as somewhat shocking. That’s the cost of honesty, and Ryu is comfortable paying it, insisting on the right to work on her own terms. “Most of the paintings are meant for a more private audience,” she said. “But my parents will say to me that they wish I would just make something that they’d feel comfortable displaying in our home.”