One in Two Thousand: Weiwei Lu ’23 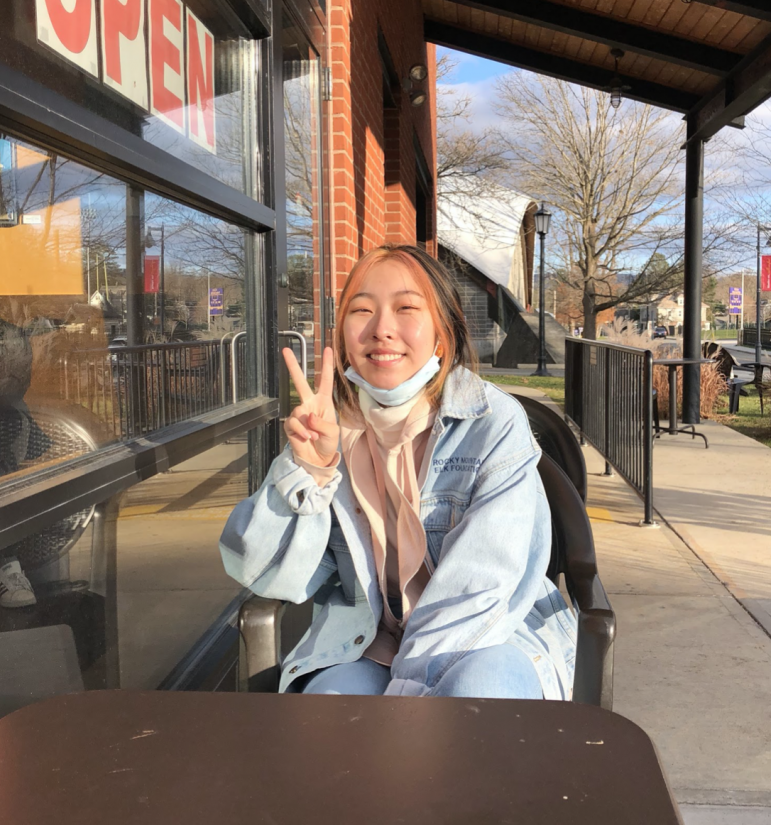 Each week, we randomly select a unix from a list of all current students at the College for our One in Two Thousand feature. As long as the owner of a selected unix is willing to be interviewed and is not a member of the Record board, that person becomes the subject of our interview. This week the script in R chose Weiwei Lu ’23, who discussed her love of Tunnel City coffee, becoming an accidental major in comparative literature and her character development over the past year. This interview has been edited for length and clarity.

Why is Tunnel your favorite spot on campus?

I went to Goodrich all the time last year. So that was my daily thing because I wouldn’t wake up in the morning without the thought of going to Goodrich and getting my bagel. That was my one driving force, you know, pushing me to wake up every morning. And then that disappeared from our lives. And I had to just pick another spot where I could sit for hours. And that turned out to be Tunnel.

How much time would you say you spend at Tunnel per week?

I usually designate Monday and Thursday for my Tunnel days because it’s really close to the testing center. And  it’s all about efficiency, right? So I go get tested, and I come into Tunnel and sit. So that’s my thing. So probably like eight hours [per week].

My go-to is the Breve — 12 ounces, less ice. But I’m just gonna say I feel like my drink at Goodrich is substantially better than my drink at Tunnel.

What would you get at Goodrich?

Goodrich is half-and-half matcha latte with oat milk. And one pump of vanilla.

It was so good. I developed that after like six months.

Switching directions a little bit, I heard that you are in Ephoria?

I am in Ephoria.

I think what’s so great about any a cappella group is that it’s a pre-established community. I feel like we spend a lot of effort choosing the right freshmen for us. And so I feel like, this year in particular, we are a very cohesive group.

And you’re also in Sankofa. Do you feel similarly about Sankofa?

Something about singing is just way easier to organize in the middle of a pandemic. But it’s so hard to dance on camera. You don’t even understand how hard it is. It’s so hard to learn routines over Zoom. Like if I look at you do something, and I go, “Oh, yes, I will swing my arms this way.”

[Weiwei waves her arms around.]

But on Zoom, you have to translate, like mirror everything in your brain as you learn it, and I can’t do that.

So what’s your major?

Um, I think I accidentally took too many English classes, so now I’m gonna be a comp lit major. But otherwise, I’m kind of flip-flopping between history and sociology. I feel like neither of them really fit my interests fully. But I really enjoy taking classes in both of them. I feel like I do things accidentally a lot. I feel like all my life has just been accidents.

What are your interests and how do history and sociology not quite fit them?

I really liked [sociology]. I liked the content that we learned. But it doesn’t really sit right with me because sociology is all about ethnography, which essentially is, if you’re a sociologist, you would go to a country or a place and then stay there for two years and study the people, study their society. Right, but [it] doesn’t sit well with me that you’re studying some foreign people. And then, like, writing books about them. I don’t know. It’s really interesting, and I learned a lot by taking these classes, but I don’t like the practice.

That reminds me — I took Anthropology 101 last year, and I couldn’t quite put my finger on why I found it uncomfortable. But I think that’s it.

Yeah, it was weird.

You’re trying to represent a people and you’re trying to sort of insert yourself into them, but in doing that, you’re also “Othering” them in a much deeper way.

I heard you had a YouTube channel over quarantine.

I did have a YouTube channel… I feel like I might start reuploading, probably over this upcoming quarantine, which I’m not super excited about. But I guess you know, anything for my future career.

I go to Williams College. I’m probably going to become a consultant.

Yeah, sadly. Do you want to do something more creative?

I think I want to do something that’s less, like, “I am supporting only the top 5 percent portion of the economy.”

Right. So do you have a dream job?

I don’t think I have a dream job. I think what I realized after the first year of college is that, like, nothing really matters. So I don’t really want to make a lot of money. But, coming from Williams, it’s probably inevitable that — not inevitable that we’re gonna make money — but it’s gonna be way easier for us, having this elite background, to not have to worry about things. So I guess in the best-case scenario, I would like to help people who don’t have all these privileges piled up, leading them up to that point. But that’s very vague. I feel like everybody has some part of that in their future career dreams anyway.

What do you mean by nothing matters?

Nothing matters because I don’t know why I used to care so much about getting into good colleges, you know, getting a good job, getting good grades. Obviously, I still want to get good grades, but that’s mostly to prove things to myself, rather than adhere to social norms because they’re social norms and because you’re expected to adhere to them. I find very little point in doing things for other people’s sakes, rather than doing things for your own sake.

There was one thrift haul because I’m really into thrifting… I think thrifting is an adventure. It’s not necessarily to acquire new things — I definitely am a bit of a consumerist — but I feel like it’s really fun to go in there and be like, “Everything is garbage except for this thing because I found it. And I bought it for $5.” It’s such a shot of serotonin. It feels really good to find something in a thrift store. But I feel a bit more apprehensive about thrifting now because I don’t want to contribute too much in the gentrification of thrift stores… I feel like a big step I’ve made is to think more consciously about the choices I’m making in life, which I think is a way bigger part of learning how to be a responsible citizen than getting Goldman Sachs internships or whatever.

Why are you comparing that to Goldman Sachs internships?

I think a lot of people spend too much effort thinking, like, I don’t know.

Like a life that one should lead results in this Goldman Sachs internship. When in reality, a good life is one that you live morally. Is that what you’re saying?

I feel like that makes me sound like I have the moral high ground, but I don’t feel like I necessarily do. I just personally wouldn’t want to spend my effort thinking about how I could get a Goldman Sachs internship next semester or something like that.

Like it just makes you happier to not do that.

It makes me happier to shit-post about capitalism on my private Instagram. [Laughs.]

You don’t feel morally superior to someone who gains happiness from pursuing a Goldman Sachs internship?

I don’t think so. I think all of this is very complicated… I can’t say I have a moral high ground. It’s just the way I’ve chosen to think about my place in the world.

I think America is a good case study. As a Canadian, I would not like to live in America in the future, or be involved with America. But I think it’s a good case study for understanding how capitalism manifests in the worst way possible.

I think that’s very fair. Why did you decide to go to college in the U.S. if you never want to associate with it?

You have to understand I’ve grown a lot in the last year of my life. In high school, I really didn’t think too deeply about anything in my life. It was just my parents being like, “Let’s achieve the American dream” because I was an immigrant. This ideology is very prevalent if you’re an immigrant from East Asia. You would come here for the sole purpose of giving your child a better education. So that was kind of their whole thing growing up. They obviously support me in my other pursuits as well. But the bottom line [was] that I would go to a good America[n] university. And they spent a lot of effort in high school drilling that into me. They didn’t really need to drill that into me because my classmates were already so caught up on it anyway… Once we achieved that, I feel like I have a lot of mental space now to think about other things, which is why I’ve come to the realization that nothing really matters.

So over the past year you’ve transformed in this way.

Not like transformed — it’s character development. That’s the way I’d put it.