­The Pick-Up Pop-Up Bookshop: A visual suspension of the new coronavirus reality 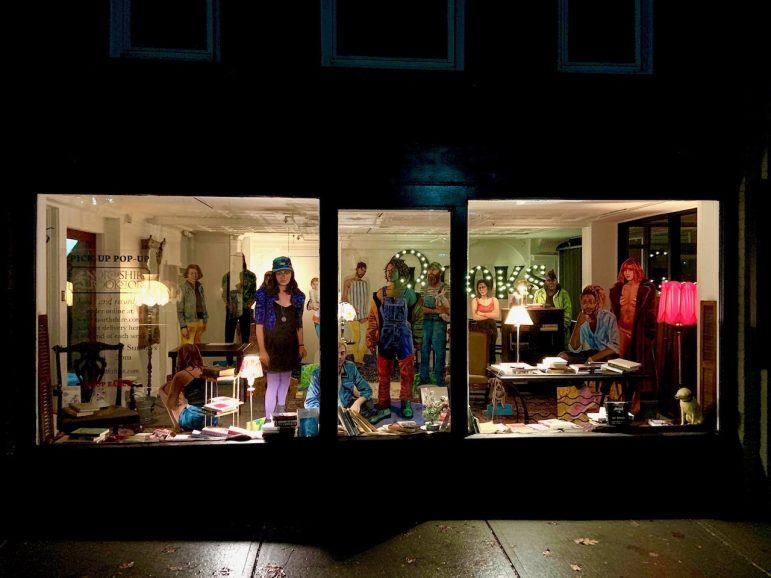 The new art installation and book pick-up in the lobby of Images on Spring Street. (Photo courtesy of Stacy Cochran.)

“It’s almost a single freeze frame of a movie. It’s a space, cast with characters. The idea is to take you away, and sort of transport you off Spring Street,” said Artist Stacy Cochran as she described her new Pick-Up Pop-Up Bookshop in town. As the Mass MoCA gift shop recently closed, Cochran fashioned an operative art installation to create a moment of atmospheric light in the symbolically vacant space. The space is not a complete store, but a pop-up installation, intended to emulate a bookshop, where people can pick up an order placed from the website of the Northshire Bookstore of Manchster, Vt. each week.

“It was sad to see Images with an empty storefront. So I thought I’m just going to rent the space and do something here that feels productive,” the artist said. The goal was to contribute to the life of the street and bring people together in an unexpected way, especially in this isolating time. “The first thing I thought of was a bookstore. I am worried about independent bookstores, as we all are, and if anyone is going to spend money on gifts or for themselves, and be persuaded not to go to Amazon to do it, that seems like a win,” the artist said.

For November and December, the space is an “ode to reading” storefront in which anyone can order books or records from Northshire Bookstore, and pick them up from the pop-up shop. Cochran, with the additional help of artist Danielle Klebes, transformed the empty store into a live rendering of a quaint bookshop setting. “There is no browsing. The shop is a diorama, like the Museum of Natural History, with a couple of snow leopards, except its local artists in a sort of Sherlock-Holmes reading room,” Cochran said.

The Northshire Bookstore, in the historic charm it brings to the main street of Manchester, was the ideal store to support and atmosphere to emulate. “It’s an endeavor dedicated to books, and to buying them locally from Northshire Bookstore,” the artist explained. One cannot walk through and scan the bookshelves themselves, but customers can step inside the scene to pick up their already purchased books. Nonetheless, the pop-up shop artfully evokes an alluring, warm aura of a bookstore in the pre-COVID era.

“I wanted it to feel kind of Victorian,” the artist said. The space is filled with furniture borrowed from Empire Antiques on Cole Avenue, and life-size figure paintings. “I was introduced to Danielle Cleves, who is a wonderful artist in North Adams and was in the midst of a show in a gallery there on Eagle Street.” As Cleves’ show came to a close, the artist was able to “pick her favorite 15” figures that Cleves had made to place through the project. “They are all real people. They are all friends of hers and several of them are artists in North Adams,” the artist said.

As some of the figure’s eyes wander through the store and others gaze out onto the street, the viewer gets pulled into an attractively familiar freeze-frame. “I think Danielle said these painted figures spoke to the distance between people during the pandemic.” Cochran said. “In a funny way, this bookshop context for them kind of turned that upside down and brought people together. So, you see a crowded store of faces, which we haven’t seen in a long time.”

The still figures are juxtaposed onto an animate room filled with music from a turntable and warm light. At first glance the viewer may not even recognize that it is merely a scene, yet with a closer look, the viewer is still drawn in to experience the ambient moment the figures are sharing.

The final step in the curation of the living project was the large brightly lit “Books” sign on the back wall, and the “Northshire Bookstore” sign on the window, both hand-painted by Aaron Oster of the Oster Sign Company in North Adams. “There were different people contributing different things, so that was part of the fun of it too. Just to get people to coordinate on a project that felt positive,” the artist said. The imaginative endeavour drew help from all across the greater community.         “You just look inside and let yourself go elsewhere, like at the Museum of Natural History. If you’re a little kid there, or when I was a little kid there, you’re suddenly, just for a moment, transported to the jungle of wherever that inanimate Tiger lives,” Cochran said. The space brings that authentic, transportive quality to Williamstown, as the scene invites you to stay just a second longer, breathe in the record spinning music in the background, and pick up a new read.