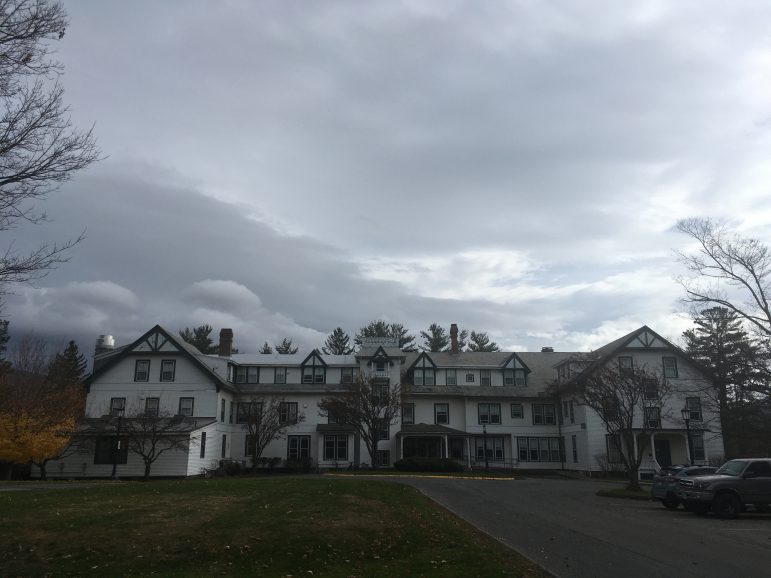 Close contacts of students who test positive at the College move to Dodd House to quarantine for two weeks. (Joey Fox/The Williams Record.)

In October, two more students at the College tested positive for COVID-19, bringing the total number of positive tests among students to five. Upon receiving their positive test results, the students were told they had to move to isolation housing, and their respective podmates, who were informed about an hour afterward, were given less than an hour to pack and move to Dodd for a two-week quarantine.

The ensuing series of events, based on interviews with four students who were placed in quarantine across the two cases, revealed a significant lack of communication on the part of the College.

The four students spoke with the Record on the condition of anonymity given the sensitive health information involved, and they are referred to by pseudonyms and gender-neutral pronouns in the story. All four have since completed their two-week quarantine.

One close contact of the fifth positive case, “Jesse,” recounted the moment they received the news. Jesse was attending a remote class with a podmate when that podmate received a phone call informing them of their positive case — which Jesse said neither could believe at first.

“I was like, ‘There’s no way. We haven’t been anywhere, we haven’t broken any rules,’” Jesse said. “All my friends are either in my pod or are not on campus,” they continued, meaning that their contacts with those outside their pod were minimal.

Jesse described the confusion they experienced during the short period of time between being informed and needing to move out. “It was a little bit difficult because we had some questions about what to bring, or can you do laundry,” Jesse said. “And the person who called from the Health Center didn’t really seem to know any of the answers. She said she would call back, but she never did.”

This communication gap was also experienced by other students who have been in quarantine as a result of a separate positive case.

According to Dean of the College Marlene Sandstrom, Director of Medical Services Deb Flynn immediately contacts by phone any student who tests positive. “As part of that conversation, she asks students if they are comfortable texting all of their podmates to let them know to ‘shelter in place’ until they receive further information from the Health Center,” Sandstrom said. “We do this to limit the amount of contact that podmates are having with others as quickly as possible.”

A close contact of a student who tested positive on Oct. 3 — the fourth at the College to do so — described how they did not receive any information from the College before their podmate informed them of their positive test result.

“I didn’t get a call from anyone,” the close contact, “Casey,” said. About half an hour after their podmate received news of their positive result, Casey received an email. “The first correspondence that I got [from the school] was an email from [Senior Associate Dean of Campus Life] Doug Schiazza … which I found to be just egregiously clinical and not caring for what was going on at all.”

The subject line of Schiazza’s email was “Moving to Dodd,” and the message informed the student where they would be moving and to bring only “necessities.” However, the email contained no information about how long their quarantine would be or how they were expected to move.

“Do I need to bring blankets or toiletries? … When do I need to be packed for Dodd?” Riley said they asked in their response. “They didn’t say when they were going to send anybody. And then once I arrived there, I sent a much longer list of questions where I broke it off, like medical questions, living arrangements, academic questions, and the only one who responded was Deb Flynn about the medical questions… Deb Flynn was very helpful.”

Sandstrom said that she has been in conversation with several quarantined students and is working towards improving communication and “timeline information.”

“While we are incredibly blessed to have had a very small number of quarantine incidences, it means that our process is still new, and we are eager to improve it,” she said. “A new information sheet for students in quarantine is already in the works.”

Flynn also said that a new quarantine communication process was being implemented.

“The Health Center is now individually calling these students first with instructions on what to pack, how long quarantine is and answer any questions,” Flynn said in an email to the Record on Nov. 9. “I then email them information regarding isolation and quarantine. I am currently editing this document based on suggestions I have received from students and am also scripting an email to send after the initial call.”

“Having never done this before it has certainly been a learning experience. I continue to work on making changes that will hopefully help moving forward,” she added.

Another student who was quarantined in early October, “Alex,” said they were getting brunch on Oct. 3 with the fourth student to test positive when the student was notified they had tested positive.

Alex, who is not in the same pod as the student, personally decided to self-isolate after learning of this, but they did not receive an official call from the College telling them to move to quarantine housing until two days later.

The person who tested positive was “not instructed to tell [me] to self-isolate,” Alex wrote in an email to the Record. “There was no communication from the College … until the call from the contact tracer,” which only happened after the student who tested positive told the College for the second time that they had brunch with Alex. According to Alex, a second friend was also at the meal and had a similar experience.

Flynn said that the College relies on the student to provide the names of close contacts when they test positive. In Alex’s case, according to Flynn, the positive student didn’t remember until the next day. “Once they notified us, the students were contacted and moved,” Flynn said.

Upon entering quarantine on a Saturday, Casey said they were stressed because they were not able to get tested for several days. “I had four days in quarantine where I had no idea whether I was positive or negative,” they said. “I had a headache and thought I had a fever, but I didn’t because I was just worried about things.”

Although Casey asked to be tested, they were informed that the testing center was closed on weekends, and they would be able to take a test on Monday or Tuesday. “And then Monday comes and no, it’s not happening,” they said. “So we had to wait until Tuesday at 1 [p.m.]”

Jesse noted that the school refused to retest the student who first tested positive in their pod. “Their parents actually sent them a test that they sent off to a lab, and they tested negative,” they said. “Apparently it might be something to do with state rules that they can’t test [them] again, but it has just been really frustrating because [College officials] aren’t communicating that to us.”

According to Flynn, the testing protocol for positive cases follows Massachusetts state guidelines.

“A positive result is considered positive and needs to be treated as such,” she said. “Currently there is no way to differentiate a ‘false’ positive from a ‘true’ positive, therefore retesting is not recommended. I am hopeful these guidelines will change as we accumulate more data.”

A lack of support from the administration

For Jesse, the two-week quarantine was not a problem in and of itself. “I signed up [knowing] that I might have to quarantine when I decided to come back,” they said. “Nobody wants to be stuck in a room for 14 days, but given the potential public health consequences, I’m happy to do that.”

It was the lack of communication from the College that led to Jesse’s frustration. “It was hard to get ahold of anybody,” Jesse said.

When Jesse wanted to ask about the possibility of ordering other food for delivery, they had to resort to calling their initial contact at the Health Center “because that’s the only person who would talk to us.” While the Health Center staff did not see why that would be a problem, they had to defer to Sandstrom, who then had to speak with someone from Facilities.

Riley said that they had requested food delivery because of the limited food options available, albeit slightly more varied than the meals provided during initial quarantine in September. “I think every night for dinner was chicken, except for the last night where we had salmon,” they said.

While the College provided a pdf of guidelines for quarantine and isolation, some students felt the support provided was not adequate. Casey noted that the sheet listed the phone number for Integrative Wellbeing Services (IWS) but did not explain how to get an appointment. Nor did much of the advice adequately center mental health, they said.

“It seems to focus around symptoms, like it’s your physical symptoms that are interfering with [academic work], not just the fact that you’re in a room for 14 days,” Casey said. “Because I didn’t have symptoms, but it still interfered with a lot of my coursework, not being able to go anywhere.”

The College also provided students with a quarantine care package. “It was like a little miniature woodworking kit, so I made a birdhouse,” Jesse said. “And then some off-brand playdough that was dry, and some crayons and crossword puzzle sheets.”

“That was nice, I guess, that they did that,” they continued. “But given that that’s kind of been the only contact, it would be nice if somebody reached out.”

Casey was less impressed by the provisions. “It just felt like they were just throwing things at us, like, “Here take things,” instead of actually checking in with us as people,” they said.

No staff at the College were actively checking in with the students in quarantine, aside from a mandatory daily online questionnaire about COVID-19 symptoms. Sandstrom said that one question in the questionnaire asks whether the students would like to speak to a healthcare professional. “If the student answers affirmatively, a health center staff member will reach [out] to them.”

Sandstrom also highlighted a list of contact information for “all sorts of support services” that was provided to quarantined students. But several found this insufficient.

“I wish they would have just provided more communication instead of putting all of the responsibility on us to be the ones to reach out to them,” Jesse said. “In a scenario that’s so stressful and uncertain and can be very mentally taxing, I think having somebody else reach out to you could make all the difference.”