One in Two Thousand: Mikaela Topper ’21 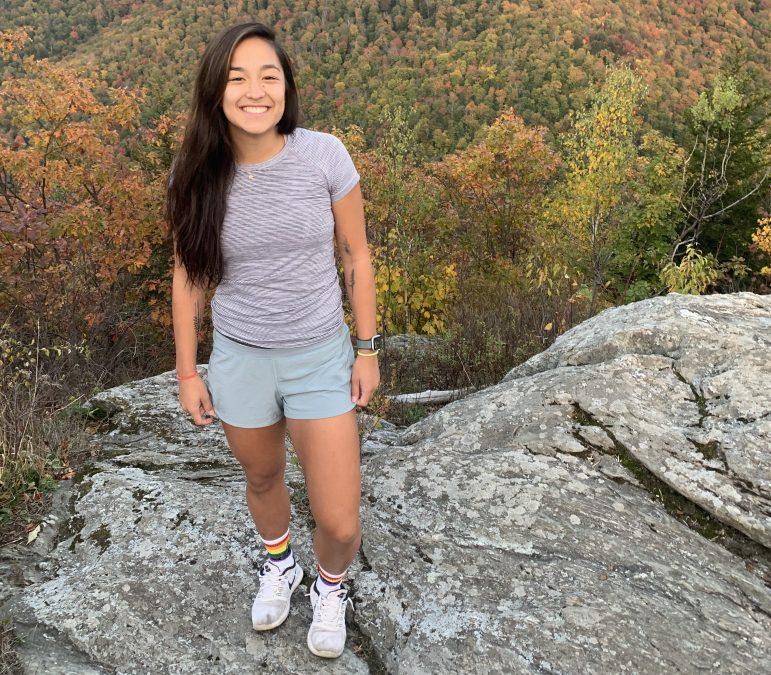 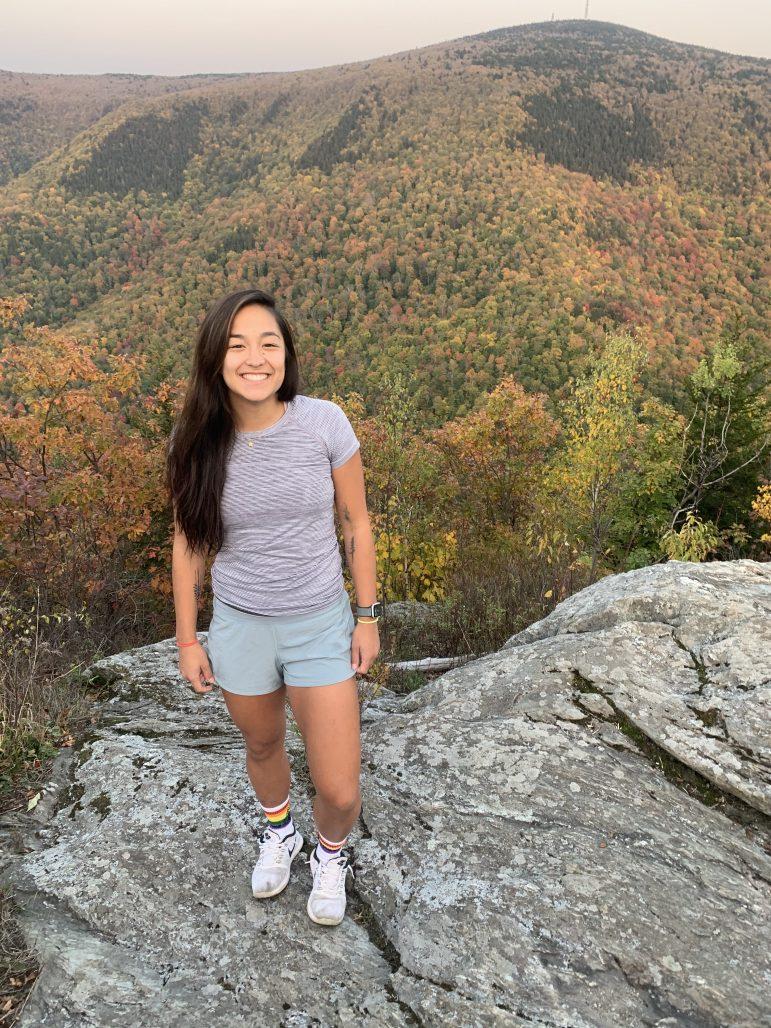 Each week, we randomly select a unix from a list of all current students at the College for our One in Two Thousand feature. As long as the owner of a selected unix is willing to be interviewed and is not a member of the Record board, that person becomes the subject of our interview. This week, the computer (using a script in R) chose Mikaela Topper ’21, who discussed being co-captain of the women’s basketball team, leading a WOOLF trip, taking advantage of a liberal arts education and winning a pie-eating contest. This interview has been edited for length and clarity.

What is your favorite spot on campus?

My favorite spot is probably Chandler Gymnasium, just the middle of the gym right on that purple “W.” Lots of good memories there. And it’s [a] very calming place for me.

Really, that’s so interesting, because I did a little background research, and I heard you’re the captain of the women’s basketball team. And I’d imagine that there’d be a lot of stress associated with that.

Yeah, I mean, definitely a lot of stress. But I think this year — especially since we don’t get to play — has made me realize, or maybe remember all the great memories of basketball. Celebrating on that “W” is always the end goal. So I’d say overall, all happy memories there.

Have you been having practice? How’s that been working?

Yeah, so for the first month and a half, I was just running captain practices. And Williams was nice enough to build that new sport court behind Mission. So it was great practicing there, but it had pretty precarious conditions in terms of slipperiness and leaves and stuff like that. So we weren’t able to do a lot. And then on top of that, we obviously have to be masked, 12 feet apart — couldn’t really share balls. So it was pretty difficult trying to organize things. But we made it work. We just made the most of the situation. So we’re doing that and then conditioning. But actually now we’re allowed to go inside. There’s only six of us on campus, so we’ve been having small distance practice with our coaches. But it’s been awesome to get back in Chandler. It’s definitely a surreal experience seeing it again.

Why are you captain of the women’s team? Or like, what does that mean to you?

Um, you can ask my coach why I’m captain — I don’t know. [Laughs.] But what that means to me — it means everything to me. I think basketball has been one of the most rewarding experiences that I’ve been a part of here at Williams. It’s taught me a ton. It’s been super challenging at times. But, like I said, super rewarding. … This year, being a senior, knowing I’m not going to play — well, first not knowing if you’re gonna play or not. And then now: “no, I’m not gonna play.” It’s definitely tested all of my leadership abilities, as well as my co-captain’s. Tested our abilities to be leaders, tested our kind of love for the game, commitment to the sport. Overall, looking back at my Williams, career, basketball has been a defining feature of it, and I wouldn’t trade it for anything.

You were a WOOLF leader?

I was, yes. I was actually talking to someone about this. I think two of my favorite things that I ever decided to do at Williams are play basketball and lead a WOOLF trip.

What did you like about the WOOLF trip? Why is that one of your favorite things?

Two mottos that I like to live by are, “Why not?” and this year I have decided “seeking discomfort” is a really cool thing. And I think WOOLF was the epitome of getting out of my comfort zone and being thrown into an environment where I had no idea what was going on, and was with a bunch of people I didn’t know.

When you’re saying you didn’t know your co going into it, that reminds me — I talked to my own WOOLF leader afterwards. I remember when you’re in the field house, she and her co seemed so mature, like they knew exactly what they’re doing, like they’re totally on top of it. But they were actually both freaking out. Did you have a similar experience?

My co-leader and I both were extremely incompetent with outdoor things. We didn’t know how to tie any of the knots. So we got to our campsite, and we were like, we’ll just tie a bow to this tree. But none of our WOOLFies knew what the knots were either, so they thought that was totally normal. And then we couldn’t make a fire any of the nights because we couldn’t figure out how to light the matches, and we always had to mooch off someone else’s fire. On the first night we put all the freshmen to bed, and we could tell they were all stressed, nervous. We put them all to bed and then we were going to go hang the bear bag as our little debrief moment, and we get out into the woods and then realize that we’re not strong enough to lift the bag over the tree. Or to throw the rope over the trees, so we had to go back to the tent, wake up the freshmen and be like, “Hey, can you guys help us with this?” It was so embarrassing, but it’s a bonding experience.

Yeah. So you’re an econ major?

Yes. Proud, single major. I have definitely taken advantage of the liberal arts education and taking classes in a bunch of different disciplines. I try to kind of dip my feet in all the different ones, so I’ve taken a bunch of psych classes, a bunch of envi classes, and then I’ve taken comp sci, English, bio, comparative literature, history — all over the place, which I think has been one of my favorite things about Williams. I didn’t come in with any specific interests or specific career goals, I really just, in fact, chose Williams, because I didn’t know what I wanted to do. I still don’t know what I want to do, which is why next year, I’m planning on working at a consulting firm, which is a very common path for econ majors.

I think this is super cheesy, but, at least last spring, and then this year, since I had a job, I am much less worried about doing well, or grades — or whatever, impressing a professor. I think that the norm at Williams is to take classes that either are for your major or that you’ll do well in so that, you know, you can boost your GPA or whatever. But I think I started approaching it as, this is the last time in my life, probably, that I’m going to be able to take a random class and a random subject from someone who is so knowledgeable and so passionate about it. I started approaching it as I’m seriously only here to learn. And even if what I’m taking is not going to be applicable to my job or my life directly, it’s just going to be cool information to have. When I approach my classes like that, I get a lot more out of them. Because I’m actually doing the reading to absorb the information, not so that, if by chance to get cold-called in class, then I’ll have something to say, you know, things like that.

How would you generally compare this semester to previous semesters? It sounds like you’ve taken advantage of the greater flexibility to do what really interests you, but are there other other things you’ve noticed?

Yeah, so people are always shocked, when I say this, but I honestly think this semester has been one of the most fun semesters I’ve had at Williams.

Which is shocking to me, actually, too. And there’s definitely been drawbacks, don’t get me wrong — some of my best friends aren’t here. Obviously, you know, normal college, things aren’t running the same way. And then the stress of the election and everything was crazy. But with that being said, I think, because last semester was cut short, and everyone got a taste of what it’s like when you can’t have Williams, I think a lot of the people that are here back on campus are just so excited to be here, just love Williams so much, and are so grateful for the opportunity to be able to go to classes in person and be able to be surrounded by your friends all the time. And I especially have found myself so impressed, and so grateful with the amount of time and resources and effort that Williams has put into making this possible for us. And the fact that it’s working and we have a bubble. It’s just unbelievable.

Okay, I think that’s all my questions — actually, you won a pie-eating contest?

[Laughs.] Yes, this is an infamous Topper family story. But basically, my high school would celebrate Pi Day on [March] 14. My parents love this story because it highlights the stark differences between my sister and I, but my sister won the pi-reciting contest. She recited 150 digits of pi. And at the same time, I won the pie-eating contest, which was — I inhaled a piece of chocolate pie faster than every single person in my high school.

And then we took a picture and put it on the Christmas card. 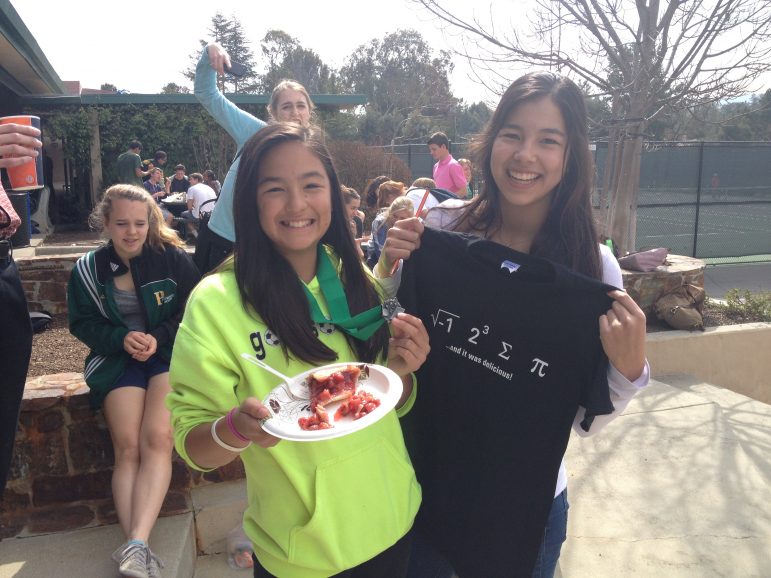