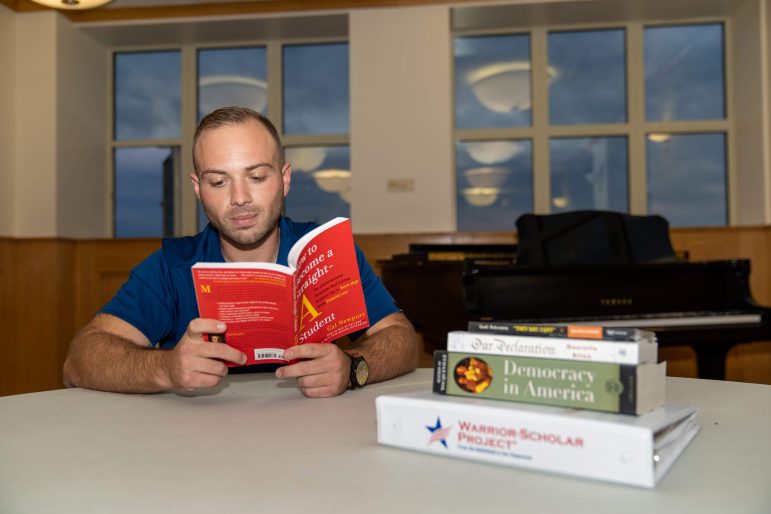 Brittany Andrade, an alum of the Warrior-Scholar Project’s (WSP) Summer 2020 boot camp at Williams, said that WSP sessions are “the hardest college thing you’re ever going to do.”

WSP is an organization that partners with colleges and universities in the U.S. to hold one-week academic boot camps for veterans transitioning from the military to higher education. This year, Williams partnered with WSP and held a virtual session for nine veterans during a week in August, marking the College’s increased effort to include and support veterans in the community.

Williams was mainly serving as a host for the WSP program. Veterans who attend a WSP bootcamp at an institution do not necessarily attend college at that same institution.

Assistant Director of Admissions Alex DiAddezio said that the College has increased its efforts to include veteran students in the community over the last three years. “This was a population that we were missing out on, and there’s a lot of value to the students and to our community,” she said. “They’re absolutely another point of our larger investment in diversity on a broad level. They often have a set of life experiences and prior experience that really adds to our campus community and was honestly just missing.”

Ryan Pavel, a United States Marine Corps (USMC) veteran and current CEO of WSP, expressed admiration for the College. “Williams is really actively looking to find ways to support student veterans and to grow that support,” Pavel said. “It was immediately apparent to us that Williams was invested in the idea of doing this program.”

In addition to partnering with WSP, the College is expanding individualized support for veterans, “which is mostly me having lots of one-on-one conversations with them,” DiAddezio said. Other support includes additional academic advising, more flexibility on housing and a potential veteran-transfer joint orientation program, which is still in the works.

“I’ve always held that Williams is the best college for veterans in the country,” said Adam Jones ’21, who served in the USMC for five years and attended WSP at Yale University in 2017.

Jones said that the College creates a positive environment for student veterans like himself  “both in the way that they support veterans through their unique adult needs all the way to how inclusive Williams as a community is. I’ve never really felt like the old guy in class, which I think is unique to Williams College and also to the Williams student body,” he said.

Joseph Grillo ’24, a veteran of the United States Marine Crops, said the WSP bootcamp he attended before coming to Williams prepared him for a college learning environment. (Photo courtesy of the Warrior-Scholar Project.)

Joseph Grillo ’24, who served in the USMC for eight years and attended WSP at Columbia in 2019 before coming to Williams, mentioned that he has found a support network in the larger transfer community — which includes most veterans.

In addition to the support network at the College, Grillo felt that WSP was instrumental in preparing him for higher education.

“The way it affected me the most was my confidence level,” Grillo said. “It went from thinking I had a shot to get into some high-level schools — and not only get in but be successful — to walking away knowing that was what direction I was heading, without question.”

While the program aims to help with the transition to civilian life, it also seeks to build on veterans’ experiences in the military.

“WSP taught me how to take those things that I learned in the Marine Corps, and transition them and apply them to academia,” Grillo said.

Jones had a similar experience with the WSP boot camp at Yale University.

“I definitely don’t think I would have been as successful at Williams without WSP,” Jones said.

Jones said he appreciated the boot camp’s goal of teaching student veterans how to learn in a college setting. “It’s not meant to teach you the content that you should know … but what it is teaching you is how to get into an academic mindset that fits the colleges like Williams that most people in those programs are trying to transfer to, so it’s fairly intense.”

Andrade, a seven-year U.S. Army veteran and current student at Vassar, explained that the WSP session at Williams was difficult, but also very helpful.

“We had to write a full paper in the week that we were there,” Andrade said. “I was up until 1 or 2 o’clock in the morning a lot of nights doing the reading for the next day. It’s challenging, but it’s challenging for a reason.”

“I care much less about whether or not somebody can recite to us a passage from Alexis de Tocqueville’s Democracy in America,” Pavel said. “We as an organization care much more about student veterans drawing confidence from their success of interacting around a complex text with a professor from Williams, and then being able to channel that into the college writing.”

Even though WSP holds sessions at various colleges and universities across the nation, the Williams session this summer uniquely represented the College, one participant said.

“You got a sense of the Williams culture,” said Derek Auguste, an 11-year U.S. Army veteran and a WSP fellow for the 2020 Williams cohort, among others at different institutions. “Any school to be called the Purple Cows has to take themselves seriously. You got that sense of encouragement and fun loving… I think that just gave the cohort that went a really special bond that wasn’t the same with the other cohorts.”

“I think Williams did, by far, the best at exuding their culture,” Auguste added. “It was just consistent across the entire board.”