Jim Reische: The man behind the administration’s COVID-19 updates 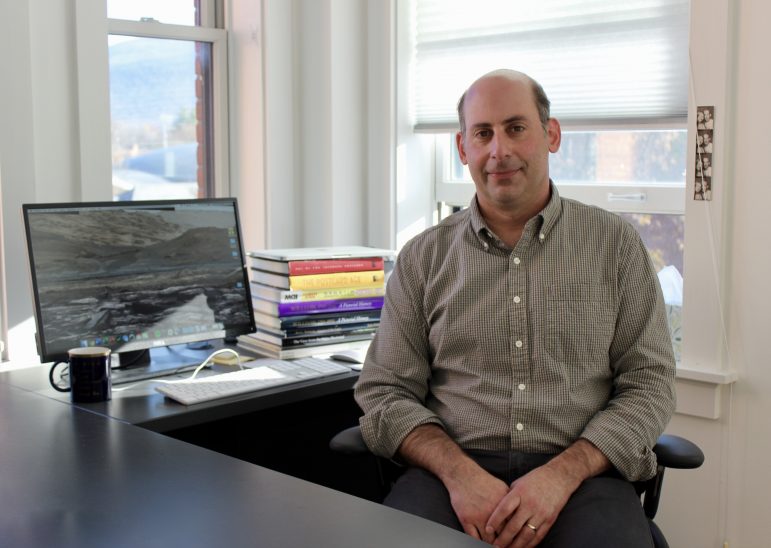 With COVID-19 changing and formalizing so many aspects of campus life, Chief Communications Officer Jim Reische decided he wanted to make the administration’s all-campus emails sound a bit more human this year. His first step: making us laugh.

“Instead of getting an email from a faceless admin that’s written in really dry, bureaucratic language — you know, we keep talking about this place as a community,” Reische said. “Well, we’re a community of people. How can we just be humans with each other? Sometimes, that means we tell jokes.”

Incorporating humor is one of many ways in which communications at the College has shifted this year. In a normal year, Reische and his colleagues spend most of their time working on admissions and alumni publications, running the College’s website and social media accounts, and overseeing media relations and Sports Information. But this year, communications staff have had to redistribute their time in order to build and maintain the College’s COVID-19 website, as well as to create a website for last spring’s virtual graduation celebration.

“So it’s been a big, big change for us, much more focused on campus communications than we ever were in the past,” Reische said.

Writing has always been one of Reische’s greatest passions, and he has not shied away from being creative with his emails to the entire student body so far this semester. One such email was the Oct. 1 “Operations and Business Continuity Update” email, which included a section titled “Foot Flushing,” which requested that students not use their feet to flush toilets.

Reische said that that very email was an important pivot point in the way that he viewed communications. “That was kind of the moment when it clicked of, like, okay, we could do something that can make this a little bit fun for people,” he said.

While the Operations and Business Continuity updates are typically sent from and signed by Associate Vice President for Finance and Administration Matt Sheehy, Reische sent an email on Oct. 8 in which he introduced himself and referenced the prior week’s toilet humor: “For those of you who were waiting to see if we could top that one, yesterday there were reports of flying port-a-potties at the college test site, courtesy of the storm.”

Reische has also had to approach emails on more serious subjects, and he said that he tries to write whatever needs to be communicated in a way that will resonate with people.

“Sometimes … humor might not be the most appropriate, but how can we acknowledge the human feelings that are going on on campus and not just have it be, ‘I write to inform you that you now have to send all of your belongings over to the field house,’” he said. “It’s just bringing it down to a human level.”

Reische has also worked on writing emails to the whole student body in partnership with President Maud S. Mandel for the past few years. This year, Reische has branched out to working with other senior staff members.

“It started out that Maud and I did a lot of work together, and it happens that we get along really well, and it’s just fun to work with her,” he said. “But it has certainly been the case that that has expanded, and so now it could be with any senior staff member; they know that I’m available to help if they want to think through how to draft a particular message.”

He emphasized that the process of working with administration members on emails is always a partnership. “I can’t think of any case ever where I’ve written something completely for somebody,” he said. “They bring the ideas, they bring the voice, and then we sit down together and figure out how to craft it.”

Because Reische works mostly behind the scenes, many students on campus might not know exactly what he does or who he is. “You know, when the president of the United States gives a speech, they don’t typically talk about their speechwriter,” Reische said. “For Maud and me, because it’s more of a partnership … because of who she is, she’s been a little more comfortable with me talking about the fact that we work together. But I don’t think most students have any idea who I am.”

“It’s up to them whether they want to know,” he added. “I don’t have a need to be famous, as long as everybody’s happy.”

Although Reische said he has worked as a writer for many years, his career path hasn’t been a conventional one. After dropping out of high school at one point and then dropping out of college at another, he finished his undergraduate studies at the University of Michigan. “I really didn’t have a major,” he said. “I took a bunch of different classes, generally social sciences and humanities, but it was really aimless.”

After graduating from college, Reische took up all sorts of jobs. He built houses in New Mexico, drove a cab, cooked in restaurant kitchens and even worked as a roadie for a few years for bands such as U2, Metallica and Guns N’ Roses.

For a year in the early ’90s, Reische taught English in the Czech Republic, which sparked an interest in Russian and Central European studies, and ultimately led to him pursuing a master’s degree in the field at Harvard.

Shortly after completing the master’s program, Reische got married and started a family around the same time he started pursuing a Ph.D. in history back at the University of Michigan. However, he said that starting a family and pursuing a Ph.D. proved to be difficult, since he would have had to travel to Europe for fieldwork. At this point, Reische began to think of what other career paths he could take.

“I said, ‘OK, well if I don’t want to do this, then what else am I good at?’” he said. “Well, writing’s always been a huge part of my education, so yeah, technically I’m a specialist in Russian and Soviet history, but I’m also a writer.”

When Reische began working as an editor, his career path became more of a straight line. Now, along with writing communications for the College, Reische runs a national professional group for speechwriters in higher education, which is supported by the Professional Speechwriters’ Association and now includes 55 people who work in communications, mostly at large universities.

Reische said that after everything, he is very happy with where his career ended up. “I so much enjoy the way that communications brings me into contact with students and with faculty and staff and that there’s an opportunity for the people I work with to contribute to this place,” he said. “And when we can make people laugh, that’s extra fun.”