‘Lock Them Up’: Students install political art outside Chapin 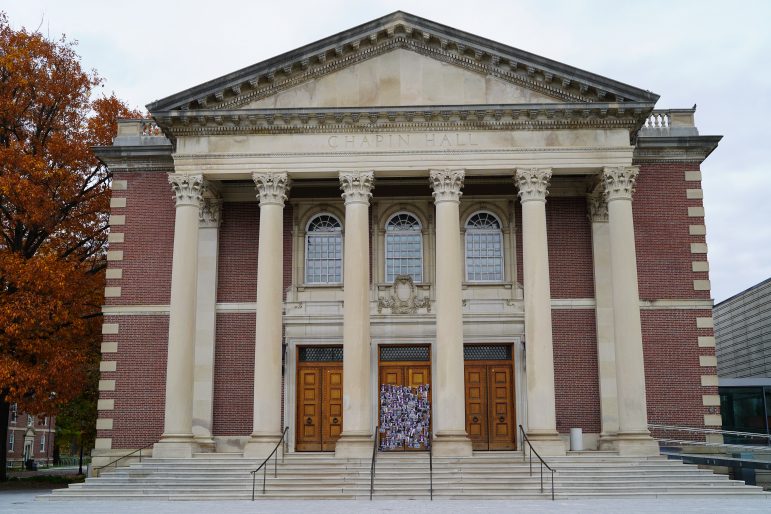 “When the revolution comes, no one is spared. It’s not just Trump’s the big bad guy. All of them need to go. We included everyone, because all of their faces need to be locked up” Crystal Ma ’21 said in regard to her recent artistic experiment “Lock Them Up.” Ma, a biology and studio art major from Redmond, Wash., and Kester Messan-Hilla ’21, a Studio Art major from Cambridge, Mass., were given an assignment by Assistant Professor of Art Johanna Breiding for their Junior Seminar class to imagine their desired world, post-election. The duo created a live experimental installation through campus on Oct. 24, centered around the doors of Chapin Hall, in which they covered the large entryway with many posters of Trump and his family, each individually titled “Lock Him Up” or “Lock Her Up.” The experiment, in its desire to prompt direct response, was quite successful—the front of Chapin has unexpectedly become a live canvas for political imagery.

Messan-Hilla was first inspired by an image he saw on Instagram of a faded poster of Melania Trump stamped with “Lock Her Up.”

“I showed it to Crystal, and we agreed that we had to recreate it on campus, but with the whole family, not just Ivanka,” Messan-Hilla said. Ma got to photoshopping, and soon they printed a swarm of “Lock Them Up” posters of each member of Trump’s family, from Ivanka to Barron Trump. There were many strong reactions to Barron Trump’s poster, but the artists explained that this was a necessary provocation. “It may be confusing to see a young person like Barron on the door, but I want to destroy the notion that the ruling class should be cared for or about. Barron will inherit a great deal of wealth and power, and with that, has the potential to do the same harm that his parents and siblings are doing now,” Messan-Hilla said.

The pair first spread the posters down Spring Street, with the idea that people could interact with them each individually, and “take them off and put them somewhere else,” Messan-Hilla said. However, they felt as though the experiment was spread out too much, and less impactful than if it was in one place, so they decided to move the posters to the Chapin doors. “Imagery wise, it’s a lot more centralized and powerful when it’s all in a symmetrical area, right in the middle of big double doors,” Ma said.

The “Lock Them Up” rhetoric is familiar, as it was a direct co-opting of the language used by Trump in 2016 to describe Hilary Clinton. “It’s turning the table, flipping it back on him. It’s using their rhetoric,” Ma said. Ma and Messan-Hilla explained that the language does not condone criminalization and the prison system, but it rather taps into a moment of justice via juxtaposition.

“There’s a sort of poetry in ‘locking’ them. It’s the same prison system that they have created and work to maintain. Anytime a cop gets arrested or tried for something, I think of poetic justice. You spend your whole life arresting and locking people up, yet here you are, in the system yourself,” Messan-Hilla explained. The two artists saw irony in the criminal complicity of the Trump family and their role in expanding systems of systematic criminalization.

Ma and Messan-Hilla chose the artistic tool of a poster purposefully. “Public art is really exciting because it can be taken down one day and put back up again. It can even be moved to another location, and be produced and reproduced over and over again,” Messan-Hilla explained. They intended for interaction with their experiment; it was, and remains, a fluid endeavor that desires sentient reaction. The poster medium allowed for this continuous, live communication between artist and audience. “I feel like ‘Lock Them Up’ was an experiment for today, tomorrow it can manifest in some other way, next year it can manifest in a different way. It doesn’t have to be interacted with as a finished item,” Messan-Hilla explained. Ma and Messan-Hilla focused on exploring the student agency, or lack thereof, in campus signage, especially now that access to buildings is limited. “There is so much land and space, there is all this wall space, and ground space, no one is telling you that you can’t put a poster somewhere,” Messan-Hilla said. 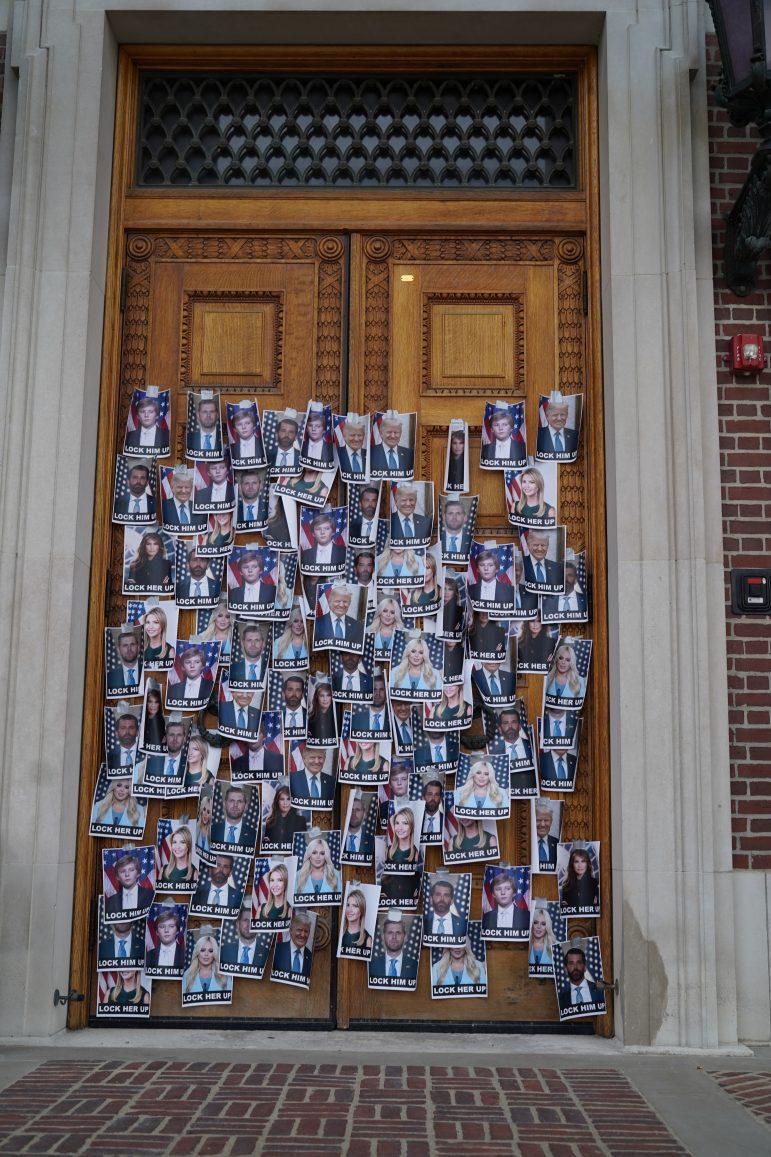 The posters on the doors to Chapin Hall (Photo courtesy of Kester Messan-Hilla.)

As soon as their experiment shifted from an idea to a physical work, there was interaction. Suspiciously, all of their first prints were taken from the Jesup Hall printing site before they could retrieve them. Direct interaction continued as they first experimented on Spring Street; an elderly man was spotted walking up and down to take down their work. “The point is for it to be interacted with. That shows us that the work is being received and that it’s having some sort of impact or inciting some sort of strong emotion that someone thought ‘I hate it so much that I need to go up and down the street and take these down,’” Messan-Hilla said. This strong reaction to their work on Spring Street motivated them to create the more concentrated Chapin door installation. “[The reaction] made me feel good. We felt inspired to print out more and put more up,” Messan-Hilla said.

A few days into the installation’s position overlooking Paresky Lawn, it disappeared from Chapin and a new EphVotes “VOTE” banner stood on each column. EphVotes board member Niku Darafshi ‘21 wrote in an email to the Record that “EphVotes has no connection to the art installation or to its removal. Our team has been working with facilities and the music department for weeks to plan the non-partisan ‘VOTE’ banner. The timing of the art installation and our banner was completely coincidental.”

While Ma and Messan-Hilla do not know who was responsible for taking the posters down, this interaction with their experiment was especially notable for the artists.

“It was interesting that that was what replaced it. It’s just so passive and very neutralizing to advocate for the action of voting rather than specific power structures, people, or legislation. It felt superficial,” Ma explained. “If they mean vote for Biden, why wouldn’t they just say that? What are they afraid of?” Messan-Hilla asked. These new banners were somewhat contradictory to the sharp political intention of the installation, and the artists felt that their work had been replaced to create a facade of impartiality for the school.

“I just felt so embarrassed. I felt so humiliated and ashamed. Not that I did something to be embarrassed, ashamed, or humiliated about, but rather I felt ashamed by this place and how fearful this place is of being really pointed and specific,” Messan-Hilla said.

The artists were intrigued, yet discomfited, by the school’s unwillingness to accept the politically charged work. “Regardless of who took it down, there is a strong contrast between having it there one day, and then the next day it’s gone and just says vote. It says something, like who is controlling the space? Who is controlling the imagery?” Ma asked. This interaction with their experiment gave the artists new information on the political assumptions often made at Williams.

“I’m really interested in destroying all those notions and making people feel uncomfortable, to think critically about who they are and where they are,” Messan-Hilla said.

Messan-Hilla and Ma’s work disrupts the binary of incomplete vs. completed artwork. The installation was not sequestered from its interactive vitality once removed, but rather it remains as an alive and unfinished experiment. Even this article further propels the reactivity of the experiment, as it responds, and more will join this interconnected experiment with each read. The duo shared snippets of future ideas with each other as they discussed their work; even looking out at the sidewalk of Spring Street, the two viewed the cement as a canvas by which they could continue. For the artists, their part in the experiment has not yet reached an end. In the coming weeks, we may encounter a new Messan-Hilla and Ma collaboration on a sidewalk block by the Bookstore, or on one of Paresky steps.

Editor’s Note: this article has been corrected on Nov. 5, 10:03 a.m. to include a statement from the EphVotes Board.