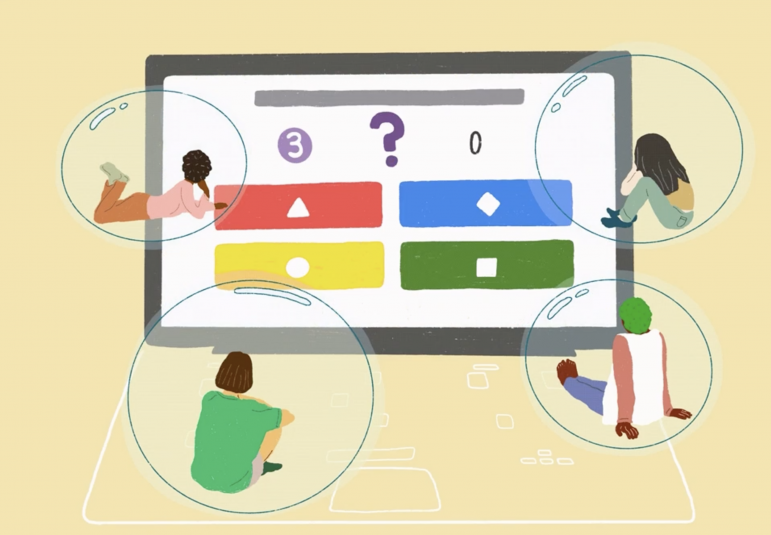 Williams students have found themselves isolated from one another due to the COVID-19 pandemic. Students on campus must wear masks everywhere they go, remain socially distanced from their peers and comply with size limits for all gatherings, among other restrictions.

For affinity groups, the added division of remote learning and campus COVID protocols — coupled with the disproportionate effect of the pandemic for students on financial aid and in marginalized groups — has illuminated the role affinity groups play in fostering a sense of community. The Record spoke with some racial, ethnic, LGBTQ+, religious and international affinity groups that have relied on online methods, both live and asynchronous, in building social connection this year

“For most underrepresented groups and minorities, there is often either no visibility or hypervisibility,” said Shizah Kashif ’24, interfaith liaison for the Muslim Students’ Union (MSU) and member of the International Students Association (ISA). In email to the Record, Kashif wrote, “groups like the MSU and ISA mediate those polarizations to produce a space where there is positive visibility — not just within the confines of their meetings/events but within the wider community.”

“Being remote means you’re not physically visible on campus either,” Kashif, who is remote, added.

Maxwell Song ’23, co-chair of OURSTEM+ (a group for underrepresented identities in STEM+ fields), stressed the importance of representation and of role models for students. “Seeing themselves in a field makes them more likely to be able to continue it on, because if you yourself are the only minority and everyone else is not like you, it’s like, ‘I wonder if that means I’m not a good fit,’” he said. “I guess seeing those definitely helps.”

During a typical semester, different affinity groups offer a variety of in-person activities. Koreans of Williams (KoW) and Students of Caribbean Ancestry (SoCA) both cater cultural foods — KoW for its monthly dinners, SoCA for its annual food festival highlighting various lesser-known dishes alongside Caribbean staples. ISA kept an open tab at Goodrich Coffee Bar for students to gather and socialize. OURSTEM+ hosted dinners and talks that allowed students to connect with professors, thesis students, and others who had completed research and internships. MSU would host prayers, poetry nights and coffee hours.

Given the in-person nature of affinity groups’ typical events, the transition to hybrid operations has not been easy.

“Since the vast majority of our community left campus immediately back in March, we had to immediately transition to virtual,”  said Mohammad Mehdi Mojarradi ’23, co-chair of MSU. “Our weekly Friday prayers were right away moved to Zoom.”

“We try and keep most of our events online but make sure to meet once or twice a week in-person so that no one feels discouraged,” he added.

Other clubs have found difficulties in maintaining the schedules they had before the pandemic.

“Last year when we had biweekly meetings, whoever was free would come down to whatever building we were in, and we would just come and chat,” said Riley Yuen ’23, co-chair of Asian American Students in Action (AASiA). “This year, I think it’s harder to feel motivated and schedule a Zoom meeting because there isn’t as much reward of human-to-human interaction, so it’s something that we’re trying to think about how to work on.”

“Zoom just isn’t a particularly fun thing to do for most people, especially for people on campus,” Jiang said. She added that the significant time zone differences for many members have restricted their meeting times as well as their potential activities. Onder Kilinc, co-chair of ISA, said that ISA has also had to prioritize virtual activities due to the significant portion of their membership being remote.

“Zoom fatigue” has hit remote students particularly hard, according to Kashif. As most of their academic and social lives are confined to the screen, students often find it difficult to engage in extracurricular communities as they would have during a normal year.

As a remote international student who lives in a time zone 8 hours ahead of Williamstown, Kashif said it seemed daunting to find “her people.”

“I think the physical strain the pandemic has put on a lot of our relationships has meant many people are eagerly searching for connection,” Kashif said. “But it’s not easy to work up the urge to join so many social Zoom calls after attending Zoom classes.

Another strategy these groups have adopted is to create things that can be enjoyed purely asynchronously — without the need for attendance at meetings. Various Minority Coalition (MinCo) groups such as SoCA plan to create asynchronous events that culminate into greater representations of student voices and creations.

“We’ve been trying to work on something that’s less Zoom-like, because we know that Zoom meetings can be a lot of responsibility — nobody wants to be on Zoom all day,” said Mazie Alexander ’21, co-chair of SoCA. If it does morph into synchronous events, Alexander expressed hope that it would encourage the attendance of “people coming to share, knowing this meeting is going to be about opening the space.”

The Black Student Union (BSU) has started a podcast called “Virtual Vanguard” involving students from the Society of the Griffins (a group preparing minority men for the post-Williams professional environment), Sisterhood (a community for Black/POC women to navigate their double minority stigma) and others in discussion with College alums, professors and locals about the Black experience. Julius Dodson ’21, chair of BSU, spoke with excitement of upcoming projects and how BSU approached its virtual operations.

“I think the main thing there is that we don’t have a Zoom call every week,” he said. “We either partner with a group or we try to bring a big speaker to campus and maybe do a group Zoom call once a month or something.”

Affinity groups have also turned to social media to supplement the Zoom experiences they offer.

“The social-media stuff is not entirely new to us — we had an Instagram page before,” Dodson said. “But, we are seeing a lot more engagement on it this year than we have in previous years, especially since we’re also releasing a lot more new content.”

First-year students this semester have sought out these affinity groups for similar reasons — to connect with students of similar backgrounds and to find niches for conversation.

“I came from a majority Asian American high school, and I took that kind of environment for granted,” said Alison Zhang ’24, a member of the Chinese American Student Association (CASO). “There’s a really nice feeling in just being able to vibe with people who’ve shared a lot of your experiences and culture. So I guess you could say CASO had a sense of familiarity that really appealed to me.”

Kashif wanted safe spaces where she could be heard and hear about other students’ experiences. “In the ISA, I found others who were also grappling with the remote vs. in-person question between Williamstown and wherever they called home,” she told the Record via email. “The MSU was always checking in — more as friends than anything else. So what ultimately pushed me to really become involved was the people, hands down! We get each other’s cultural quirks, immediately catch on to each other’s senses of humor, and always end up having an enjoyable call!”  She said that this sense of unity pushed her to join MSU as the interfaith liaison.

Surya Kotapati ’24, a MinCo and first-year representative in the South Asian Student Association (SASA), said he was looking for a “tethering point — a space to celebrate South Asian culture and feel more at home at Williams.”

He said he has enjoyed the game nights offered by affinity groups.

Game nights have gotten through to first-years particularly well because of the  spontaneous interactions they can generate. “My favorite activity is a somewhat informal, almost accidental tradition we’ve developed over the last few weeks,” Kashif said. “Each Saturday, a bunch of us freshmen and upperclassmen log into a Zoom meeting room where we call each other impostors and make hardy cases for our innocence, and it’s easily the most fun I have over the weekend, especially since cases in my town are spiking and another lockdown seems imminent. We also share our wins, lows, and special and mundane updates from the week, so it’s just really nice to catch up with each other!”