How religious groups have adapted to campus COVID regulations 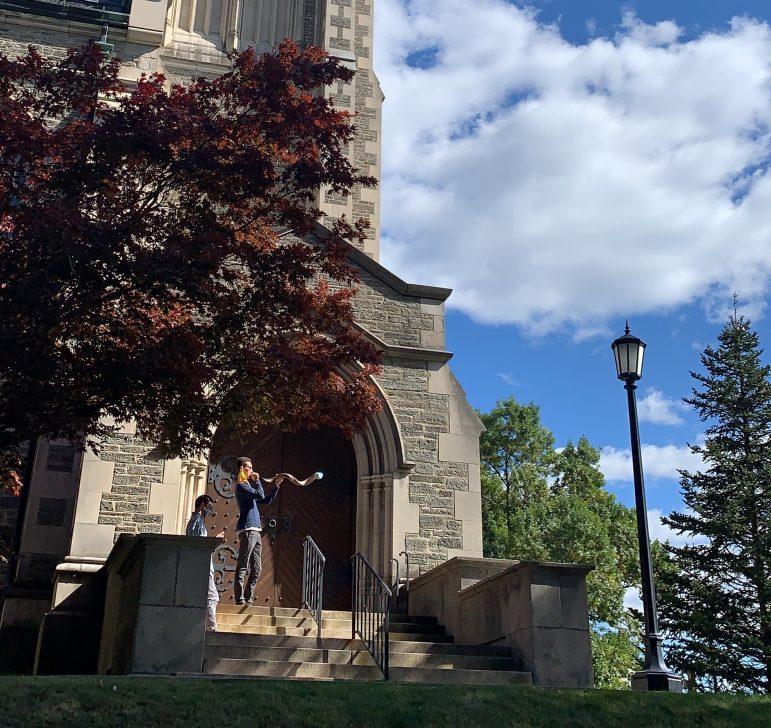 For Rosh Hashanah, the Williams College Jewish Association rubber-banded a mask to the shofar, a kind of horn, to prevent the spread of germs. (Molly Frasure/The Williams Record.)

As it does every year, the Williams College Jewish Association (WCJA) held a blowing of the shofar, a kind of horn, for Rosh Hashanah. As so many things do, the timeless tradition looked a little different this year.

WCJA put a mask on the shofar.

The result, WCJA board member Zia Saylor ’23 said, was a “long, elegant ram’s horn” with a blue surgical mask rubber-banded to the opening at the end — to prevent germs from escaping.

After the (slightly muted) blowing of the shofar, WCJA proceeded to the Green River for tashlich, the practice of throwing pieces of bread into water and symbolically casting off sins. The bread was from one of Jewish Chaplain Seth Wax’s quarantine sourdough loaves “that hadn’t gone too well,” Saylor said.

This ceremony, rife with pandemic items, captures religious life on campus under COVID regulations. In spite of the strangeness, formality and constant reminders of just how different the world is, students have found creative (and often remote) ways to keep in touch with the religious sides of their identities.

“We’re trying to make sure people are able to be spiritually fed,” President of Williams Catholic Patrick Postec ’21 said. “It’s certainly not easy, but everyone is feeling that.”

To serve its members, Williams Catholic has been hosting virtual, student-led masses. The group has also held Bible studies over Zoom and nightly rosary prayers over Discord.

Mohammad Faizaan ’23, the treasurer of the Muslim Student’s Union (MSU), sets up a camera to record the Jumu’ah prayer service every Friday. He also livestreams a religious gathering held on Wednesdays, Wasila. This is complicated by the fact that students from certain sects of Islam cannot participate in prayer remotely, and the prayer room in the basement of Thompson Chapel is limited to only 10 students, per College regulations.

“Muslim tradition used to be that you stand shoulder-to-shoulder as you pray,” Faizaan said. “And you can’t do that with restrictions and masks. So it’s like, as soon as you come in, you have to bring your own prayer mat or towel or whatever you use, lay them on the ground and make sure there’s six feet between you and the next person.”

Since March, students in the Williams Christian Fellowship have been engaging in their typical, pre-pandemic activities, including discipleship groups, prayer meetings and Wednesday Night Worships — but all over Zoom rather than in person.

“I feel like students continued to reach into the community and meet up over quarantine [and the] summer because of the deep, spiritual connections we make within the community,” Rebecca Park ’22, a member of the Fellowship’s transitional board, wrote in an email to the Record.

Despite the community’s continued engagement over the summer, Park said the Fellowship’s transitional board noticed that operating during the pandemic highlighted problems within the organization.

“I think with COVID, it has become obvious who is not supported or cared for by the community,” she said, adding, “You reach out to the people you’re closest to. Some people don’t actually have close friends within the Fellowship that have people that are looking out for them”

To address the disparities in support, Park and others in the Fellowship are working towards creating a more formal board and organizational structure.

“It’s mainly because COVID really exposed the lack of leadership within our community,” Park said. “We have a lot of leaders. We have leaders of small groups and Bible studies, of worship, of prayer groups, but we didn’t have one central group that was organizing everything and making sure that logistically things were running well.”

Interfaith life during the pandemic

The Muslim prayer room — with limited hours and by swipe access only — is the only space open in the basement of Thompson Chapel, which in years past has been a hub for interfaith life, according to Postec.

The reason for it being closed is straightforward.Except for the Muslim prayer room, the basement “has absolutely horrid ventilation,” Postec said.

“A lot of interfaith life was a lot more informal and spontaneous in the past,” Postec said. “I think I found that people were hanging out in the basement of Thompson Chapel a lot. I would be attending services there, going there to pray and then I would see Muslims students going in to pray as well, and we would chat.”

Park explained that the closing of the basement this semester has prevented her participation in interfaith life.

“I don’t really see a lot of students from interfaith groups unless I already know them, and that has been difficult,” she said.

The lack of common spaces has required a more intentional, formal approach to exploring connections between faiths — mostly over Zoom. In particular, MSU, Williams Catholic and WCJA hosted an event called “A Celebration of Honey.”

Saylor, the interfaith chair of WCJA board, thought of the idea.

“I started dating my current boyfriend” — Faizaan — “who is in the MSU, and I would hear about him planning events, and I got to learn more about Islam,” she said. “I realized that, ‘Hey, there are a lot of similarities between Judaism and Islam,’ and then I got more interested in the similarities also involving Catholicism and Christianity.”

Saylor’s position on the WCJA board is new this year.

“The pandemic’s made the position of interfaith coordinator feel a lot more urgent, a lot more necessary, just in terms of bringing together the community at a time when we can’t all be on campus, we can’t all be in the same place, in the same time zone even — but still finding ways to enjoy the little things that bring us together,” she said.

She said she chose honey as a theme for an interfaith event because, in each of the religions, it symbolizes something “you have to work for,” that requires effort. Bees also serve as metaphors for community and mercy.

Postec said that when Saylor reached out to Williams Catholic, he was thrilled with the idea.

“Honey is this universal symbol for sweetness and joy and goodness, as well as [having] healing properties and stuff like that,” Postec said.

The event went well, according to Saylor. Around 20 people engaged in what she said was surprisingly vulnerable and open discussion — despite speaking over Zoom.

“I was really thrilled to see how excited people were and how ready to dive in people were, because I know it can be hard opening up on Zoom, and that was definitely one of my concerns about the events,” Saylor said. “But everyone ended up having lots of stories to share,” both about their personal lives and in relation to scripture.

The event also had a tangible aspect, where students could pick up a “honey packet and that just had honey sticks, [and] they were individually packaged which made them safe to distribute,” Saylor said.

WCJA has been helping students celebrate Shabbat every Friday in a similarly creative way. Wax sends out a Google form for Shabbat boxes, packages containing a Shabbat dinner, each week.

“It has a little baby challah and some kosher grape juice, and occasionally it has extra goodies like WCJA stickers,” Saylor said. “I’ve personally found it nice because I get to have my own mini Shabbat in my room. I have little Shabbat candles. And my boyfriend sometimes joins for Shabbat, so it’s nice because it’s enough food where you can share it with a podmate.”

Saylor added that she and her boyfriend, Faizaan, live in the same pod.

WCJA as well as many other religious organizations have been mindful of remote students, so they have sought to minimize in-person events that would be exclusionary to those students, Saylor said. The interfaith community in particular aims to be explicitly inclusionary for remote students.

Postec noted that the nature of Williams Catholic events makes it hard to host them in person.

“You don’t want to be doing some sort of prayer or event and then have to say, ‘Sorry, you can’t come,’” he said. “That [has] complicated things in a way that I can’t really see an adequate solution to.”

Postec said he has found that it’s harder to do the things he would normally do as a Catholic student on campus.

“It was really nice for me if I’m just finished with a long night at Sawyer, to be able to pop into the Chapel,” he said. “I’m one of those people that likes to have specific places for specific set things. I don’t like studying in my room, and I also don’t like making my room the place I’m sleeping, I’m working, I’m praying.”

More significantly, his room cannot actually serve as a space for Catholic prayer.

“In Catholic belief, the Eucharist, the consecrated host, is the real presence of Jesus, and certainly I don’t have substantiated Jesus in my bedroom,” he said.