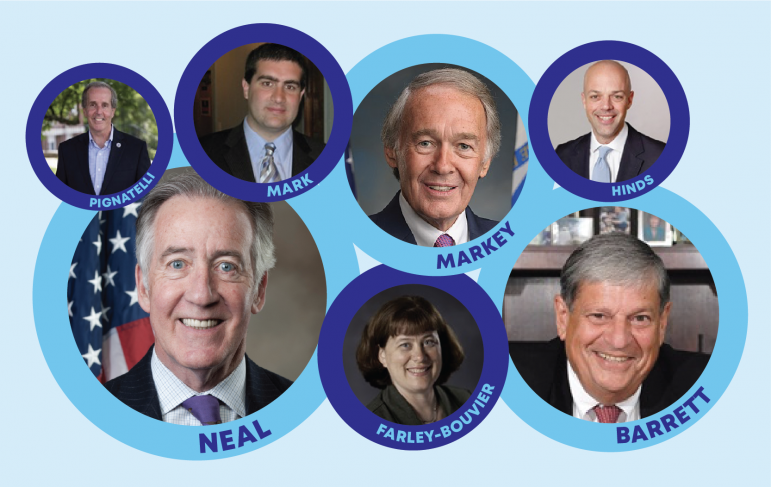 (Visual by Joey Fox. All photos courtesy of the Massachusetts General Court and the United States Congress.)

Today marks the end of voting in the 2020 general election, and with it comes the end of a long and tumultuous campaign season. In the presidential race between President Donald Trump and former Vice President Joe Biden, as well as countless federal and local races around the country, rarely has an election included such stark choices or had such dramatic implications.

But in most Berkshire County races, voters aren’t given any choice at all. In Williamstown, Neal, state Sen. Adam Hinds (D-Pittsfield) and state Rep. John Barrett (D-North Adams) will all be re-elected without major-party opposition; all three similarly escaped without Republican opponents in 2018. In fact, none of the five state legislators representing Berkshire County — all Democrats — face opponents this year.

Their uncontested victories, alongside Democrat Ed Markey’s all-but-certain victory over Republican Kevin O’Connor in the race for U.S. Senate, ensure that Berkshire County will send unchanged, all-Democratic delegations to Washington, D.C. and Boston next year.

According to Danny Jin ’20, statehouse reporter at the Berkshire Eagle and a former editor-in-chief of the Record, it wasn’t always this way. “The Berkshires used to be super strongly Republican,” Jin said. He pointed to Jane Swift, the only woman to ever serve as governor of Massachusetts and a Republican state senator from North Adams in the 1990s as an example. “[But] since then it’s not been so great for Republicans seeking office here.”

Indeed, since Republican state Rep. Shaun Kelly left office in 2005, no Republican has represented the county for any state or federal office.

Today, the county is a Democratic stronghold. It voted for Hillary Clinton by 40 points in 2016, and may vote for Biden by even more; none of the state legislative districts within the county gave Trump more than 30 percent of the vote four years ago. Thus, according to Jin, much of the action in the county occurs in the Democratic primary.

“A lot of observers feel that most of how elections are contested is primary season,” he said. “Because [the state] is overwhelmingly Democratic — a supermajority in both the House and Senate — there doesn’t tend to be a ton of swing districts in general elections that might go either red or blue.”

While none of the county’s representatives in the state legislature faced primary opponents, Neal had to turn back a strong challenge from Holyoke mayor Alex Morse, a contest he ultimately won by 18 points.

Professor of Political Science Jim Mahon explained that many voters and candidates who may have identified as moderate Republicans in previous years are now Democrats. “People who now run as moderate Dems in primaries might have been moderate [Republicans] 60 years ago, like [former U.S. Rep] Silvio Conte,” Mahon said. “[State Rep.] John Barrett’s pretty conservative on a lot of stuff, but he knows well that he is more conservative than the district. So is [state Rep.] Smitty Pignatelli.”

The personal brands that local politicians have built for themselves may also play a role in their lack of opponents. “John Barrett has very strong local roots,” Jin said. “He was mayor of North Adams for 26 years, he’s kind of this larger-than-life figure. From what I’ve seen, it seems very unlikely that anyone would challenge him because he’s such a household name.”

Races around the state

While Berkshire County may be a particularly extreme example, the phenomenon of uncontested races is present throughout the state. Four of the state’s nine U.S. congressional districts, all of which are held by Democrats, had no Republicans running this year. A staggering 32 out of 40 state senate candidates, all but one of them Democrats, also faced no opponents. (For comparison, in next-door Connecticut, only three of the state’s 36 state senators won unopposed.)

The phenomenon is not restricted to one party, either. Over a dozen Massachusetts legislative districts currently held by Republicans, many of them won by Hillary Clinton in 2016, had no Democratic candidate running.

A study by Governing magazine in 2019 found that the state had the highest percentage of uncontested state house races of any state in the union, at 71 percent; a Boston.com analysis from 2016 similarly placed Massachusetts near the top.

Mahon proposed a simple explanation for the dearth of candidates: “It takes money, time and effort to run.” For many candidates, especially Republicans in strongly Democratic districts, the effort required simply isn’t worth it.

In Berkshire County specifically, Jin said, “It just doesn’t seem like there’s a whole lot of mobilization among Republicans, just from what I’ve seen… The Republican candidates who have run haven’t had great results.”

Even though their representatives went uncontested, voters in Williamstown still have choices to make. On the ballot are two propositions: Ballot Question 1, which would create a shared database containing information about car maintenance which auto mechanics could access, and Ballot Question 2, which would establish ranked choice voting in the state.