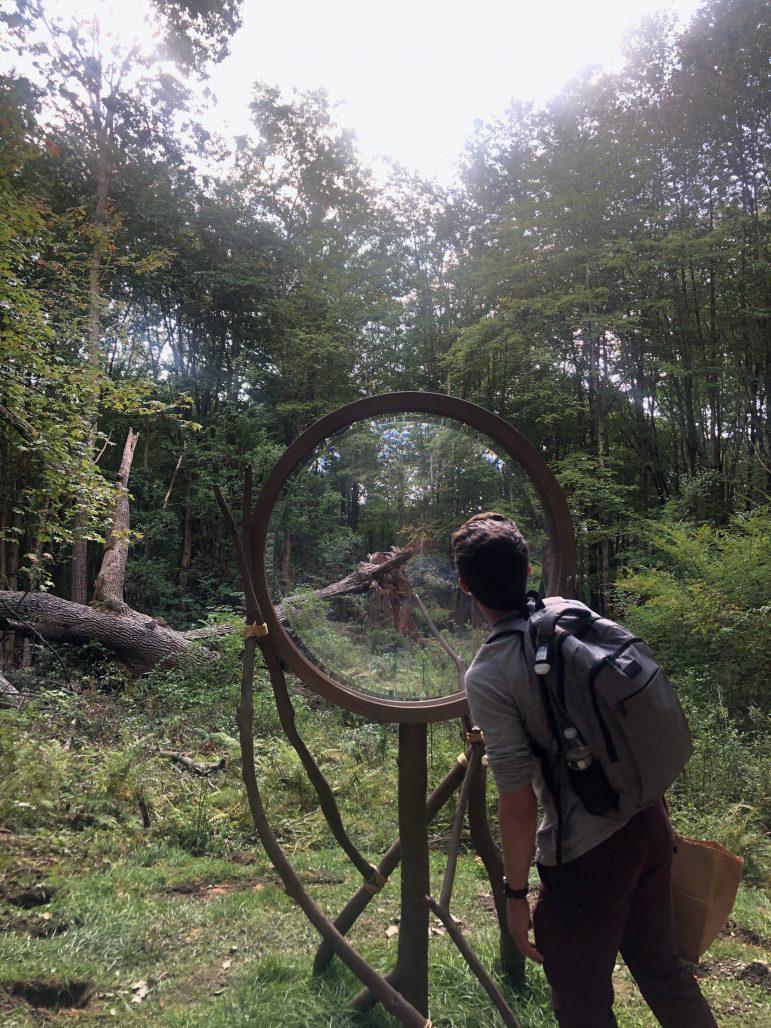 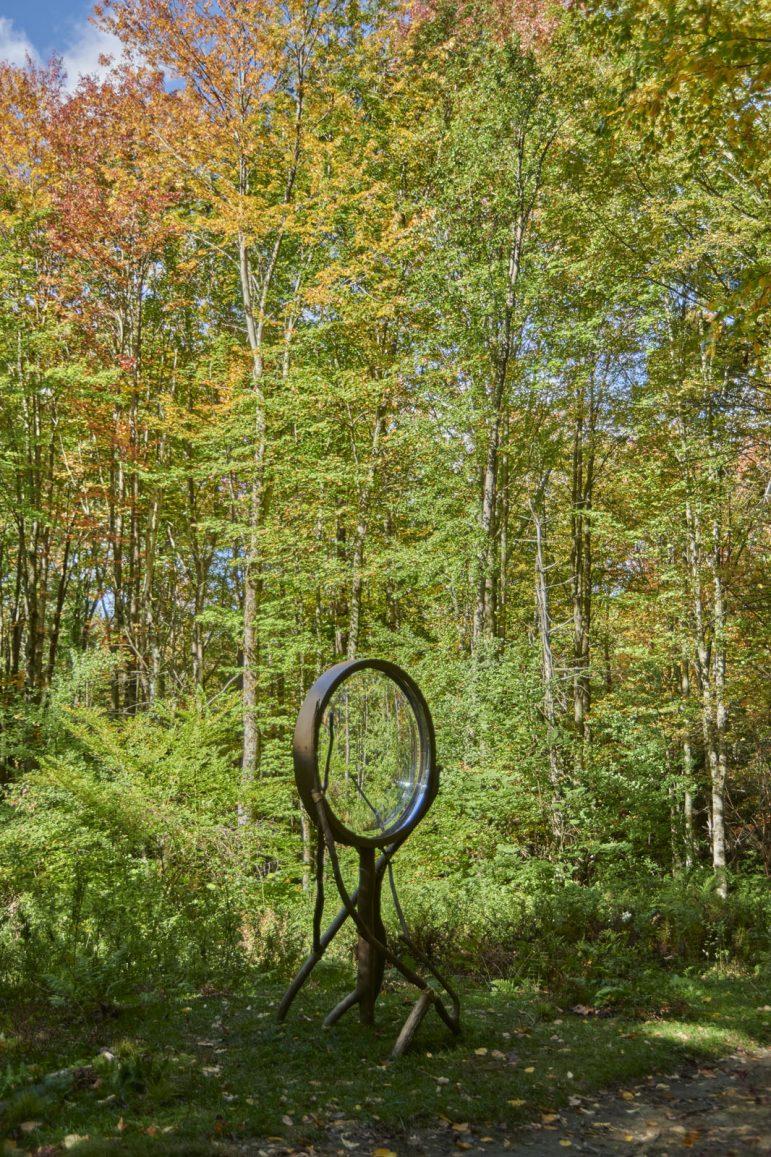 Kelly Akashi, “A Device to See the World Twice”. Photo courtesy of The Clark.

Currently situated – or hidden – throughout the landscape of the Clark’s 140 acres of forest and field are the works of half a dozen female artists. One could see this outdoor exhibition, guest curated by Molly Epstein and Abigail Ross Goodman, as particularly apt for this moment, although Ground/work was not intended as a response to the pandemic. Meant to open in late spring, the showcase was in fact pushed back repeatedly by virus related difficulties until finally “opening” in the first week of October.

I put the word “opening” in quotes only because many of these works have actually been installed for quite some time now, with the recent arrival of Hague Yang’s Migratory DMZ Birds on Asymmetric Lens completing the showcase. Yet, at the same time, each of these installations seems to create an intimate experience with its specific location, whether that be in the woods or flush against a wall. With this in mind, each piece operates on its own in a way, independent of any other piece or even an opening date. The affect of these six works, amplified by their specifically selected locales, is a welcome addition to the Clark’s continuing contemporary endeavors.

Each of these six artists – Kelly Akashi, Nairy Baghramian, Jennie C. Jones, Eva LeWitt, Analia Saban, and Haegue Yang – began their work with a visit to the museum to select a site for their piece. With the knowledge that the exhibition would run for the next year, each artist was also faced with the question of how to incorporate the transience of the landscape. How these pieces will interact with the winter, spring and summer months, we have yet to see; the current autumn foliage, however, will be a tough act to follow. 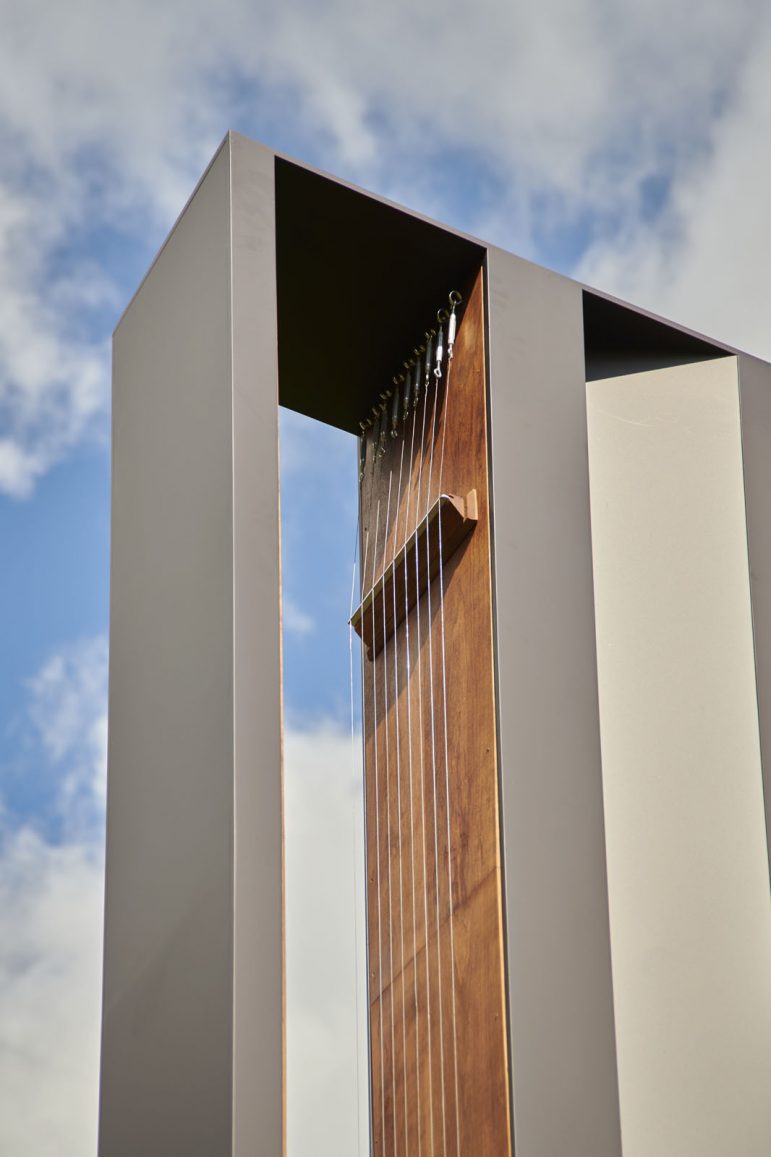 Jennie C. Jones’ These (Mournful) Shores is the closest piece to the Clark Center itself, although it could easily be missed by a passerby. The work attaches to the outer edge of the granite wall that borders the reflecting pool, appearing as almost a natural extension of the wall itself. A minimalist interpretation of an Aeolian Harp, also known as the wind harp, Jones’ piece is activated by wind and inspired by the turbulent weather depicted in Homer’s iconic Eastern Point and West Point, Prout’s Neck. The harp’s cherry wood innards also reference the trans-Atlantic trade which not only delivered such commodities but the thousands of enslaved people who produced them. Both sonically and aesthetically haunting, These (Mournful) Shores is a powerful first foray into outdoor art for Jones. 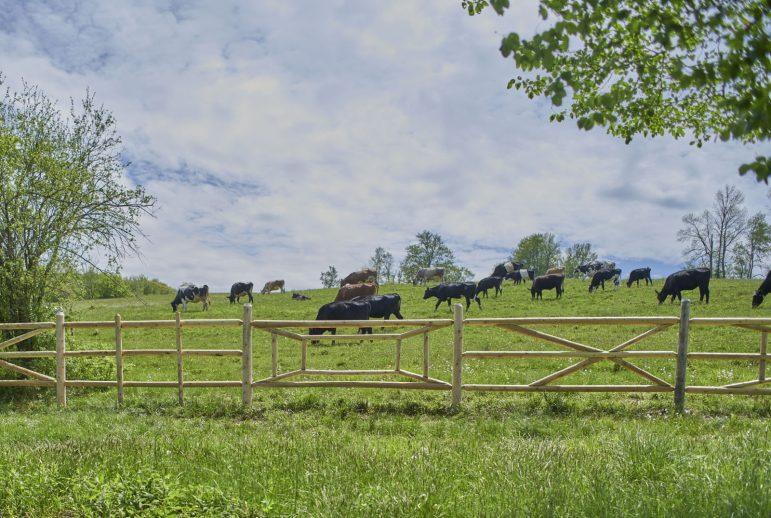 Analia Saban, “Teaching a Cow How to Draw”. Photo courtesy of The Clark.

Leaving the reflecting pool to journey up stone hill, the next piece one encounters also seems to be hidden in plain sight. Analia Saban’s Teaching a Cow How to Draw is perhaps the most functional of all the Ground/work pieces, in that it serves an explicit function: fencing in the resident cow herd in the pasture. The title of the work refers to the design of each fence frame, alluding to classical perspectival drawing instructions. Framing the surrounding landscape as the canvas, Saban’s work seems to posit the cows as the artists, in stark contrast with the Old Masters in the permanent collection below. In drawing this parallel, Teaching a Cow How to Draw creates a moment of absurdity which feels appropriate. 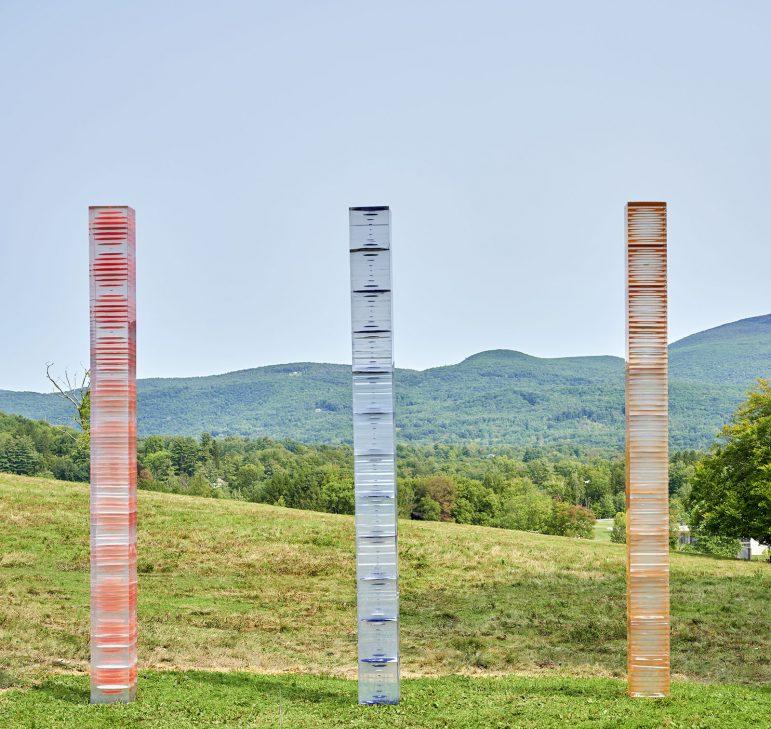 Eva Lewitt, “Resin Towers A, B, and C”. Photo courtesy of The Clark.

Next on the horizon is Eva Lewitt’s “Resin Towers A, B, and C,” three multicolored columns standing 11 feet tall. Assembled from hand-cut pieces of colorful plastic suspended in layers of transparent resin, further inspection of each tower reveals a sphere motif, contracting and unfurling with extended viewing. The work establishes an interesting binary: whereas the transparency of the resin allows for the towers to merge with and absorb the surrounding landscape, the kitsch of the fluorescent colors seems to diverge from this integration. “The bright palette of these towers,” the Clark website states, “… acts as a beacon, calling down the hill and beckoning visitors to their site.” 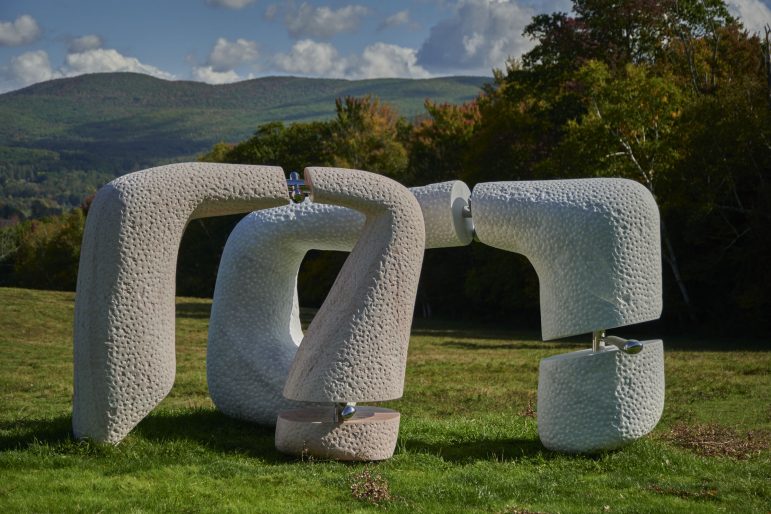 Beyond this beacon sits Nairy Baghramian’s Knee & Elbow, two roughly chiseled marble sculptures resting in the grass which have drawn visitors of the human and bovine sort [insert pic of cows in sculpture]. Trying to transfer the figurative act into abstraction, Baghramian created these two hand-hewn forms, one pink and one white, riddled with pockmarks; the texture of their exterior stands in sharp contrast to their sleek, polished interior, and the steel couplers – bones, perhaps? – which attach them. Playing off of the classicizing traditions of marble and constructions of whiteness, Baghramian’s work hovers just beyond abstraction in its allusion to joints and pivot points – and in revealing the fragile nature of marble, Knee & Elbow is able to confront essential questions of self-optimization and the potential for collapse.

Hidden in a thicket of trees is Kelly Akashi’s A Device to See the World Twice. A massive distorting lens – a magnifying glass of sorts, supported by bronze cast branches – Akashi had positioned this work to focus on an ancient elm tree. Funnily enough, the tree cracked and fell over in the spring, a strange premonition of the destruction this year would bring. Rather than training the lens on a different subject, however, Akashi left it as is, now centered on a fragmented memory of what once was. Tucked away in a blanket of green, Akashi’s installation asks questions regarding viewership, distortion, and the transience of time. In highlighting the ruins of a subject rather than its ideal, Akashi sublimates and highlights the (inevitable) decay of art. 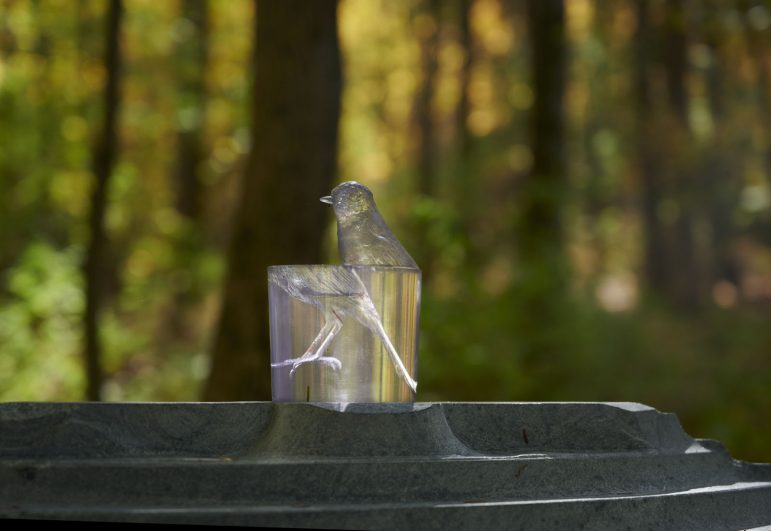 The last piece to arrive – and perhaps the most difficult to locate – is Hague Yang’s three-part installation, Migratory DMZ Birds on Asymmetric Lens, which introduces an avian diaspora of sorts to the Berkshires. Yang was inspired by the April 2018 meeting of North and South Korean leaders in the Demilitarized Zone (DMZ), a lush and biodiverse area 160 miles long by 2.5 miles wide located between the two countries. At one point during this pivotal meeting, the leaders requested to speak in private, leaving only the birds as witness to their conversations. These three pieces employ 3-D printed resin birds set atop robotically milled stone pedestals, egg-like in nature. Considering notions of presence and absence, these synthetic birds both occupy space and vanish, creating an unusual dialogue with their living counterparts in the Berkshires.

In the month that it has officially been open, Ground/work has already been the stage for dynamic artistic interventions. Sunday, Oct. 18 saw Professor Amy Podmore’s “Poetry with Objects” course (which I am a part of) collaborate with Brad Wells’ “Sound Art, Public Music” class to create wearable, sculptural, distancing apparatuses accompanied by sound components that were used to safely and communally walk and view the Ground/work installation [insert photo from this]. And just as these pieces have been the stage for intimate encounters with the public, these works are sure to continue interacting unexpectedly with their environments as well for the next year that they are on display. A balm for these troubled times, Ground/work shines as the Clark’s first outdoor exhibition – taking on new levels of meaning from our current moment while simultaneously providing a reflective space to process it.