One in Two Thousand: Francesca D’Arista 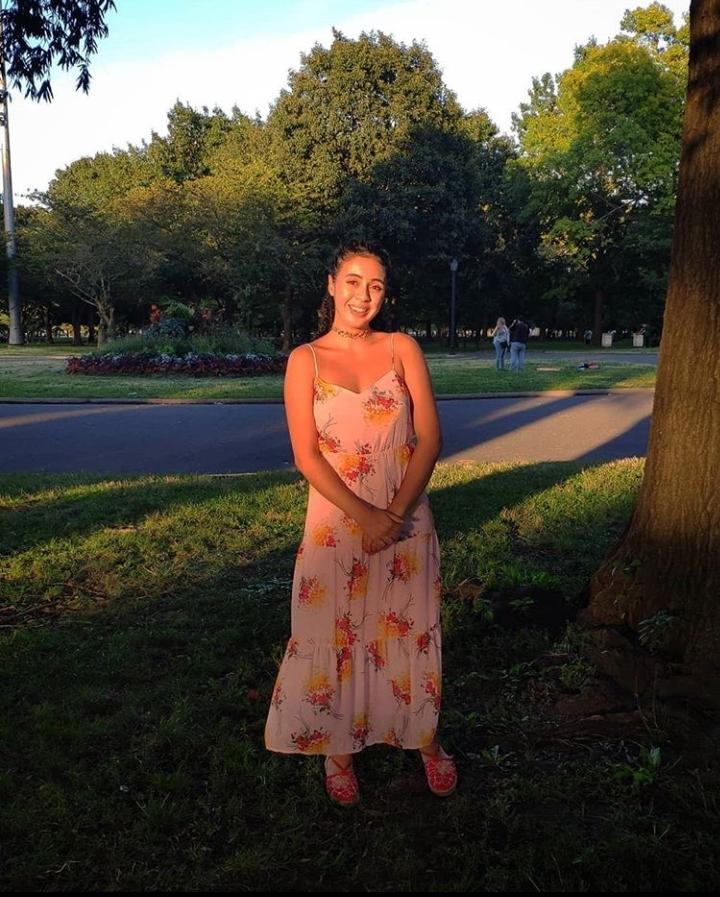 Each week, we randomly select a unix from a list of all current students at the College for our One in Two Thousand feature. As long as the owner of a selected unix is willing to be interviewed and is not a member of the Record board, that person becomes the subject of our interview. This week, the computer (using a script in R) chose Francesca D’Arista ’21, who discussed raising a cat on campus, wrestling and growing a forget-me-not in a shot glass. This interview has been edited for length and clarity.

So I hear that there’s a cat, Hunter?

Oh yeah. Hunter is my 11-year-old, big, chonky boy. We share a nice big room together, and he has a very particular personality. He literally gallops like a horse up and down the hallway. [Laughs.] He for some reason hates Lyza [Berg ’21.5], but I think it’s because Lyza is very alpha. So I think he’s just very intimidated by them.

Do you ever bring Hunter onto Zoom meetings or anything?

Yeah, he likes to make cameos. If I’m taking my class from my bed – it was a bad idea for me to do that – he’ll climb around me and stuff ’cause he loves having that attention put on him… Sometimes he’ll walk past the screen, and I’ll get those Zoom DMs [direct messages] from other students in the class being like, “Bring Hunter back!”

It seems like Hunter is living his best life.

Yeah! I have a little balcony thing, and he’ll sit out on the balcony [to] just watch the cars and the squirrels. He’s kind of like a dog. He’s kind of my rock.

That’s adorable. Okay, I have some basic questions. What’s your course of study? And how do you like your classes this semester?

Right? The catalog this semester and this year is just really, really good, so I couldn’t help but take four classes. There’s also a lot of overlap between the content of my readings between classes, so I’m actually excited to participate in my Zoom classes, which is not something I could say before.

That’s huge. Outside of class, I hear that you’ve also picked up skateboarding?

Yeah… [Laughs.] This summer, I got my first skateboard because my best friend back in New York City had one for a while, and I just wanted to be able to spend more time with her before I came back. Then I brought it here with me, and I’m very glad I did, because [when] I was coming up to get tested … I saw this skate park for the first time near the soccer field. And I was like, “Since when has this been here?” … I’m not the best at going down a hill really fast ’cause there are no breaks on a skateboard, but … I’ve been trying to learn how to ollie and do some tricks when the weather’s nice.

That’s so cool. On the topic of being buff, didn’t you also wrestle before?

Yes! Oh my gosh. All throughout high school, I was on varsity wrestling, and it was an all-women’s team. I think it’s the highlight of my time in high school, because I had problems with, like, my self-image and feeling self-conscious, especially because my high school was predominantly white, and I went in not knowing anyone. And I live in Queens, but my school was in Manhattan, so I also had to commute. I was really looking for a community that just would kind of give me a second family, a second home, and then also … just make me feel more confident. Wrestling was the greatest outlet for me to discover that. I would suddenly have arm muscles and leg muscles, and I would look in the mirror and be like, “Whoa, what? I can do that? [Laughs.] If I practice like this, my body will change and get stronger.” And suddenly I was just walking around the hallways knowing that I could basically flip over any person I walked by.

Yeah, it was just really fun [and] really empowering to also grow a community of women wrestlers… During my sophomore year, I met two national team wrestlers, and they were practicing next to us in the practice room… I got pictures with Jordan Burroughs and Adeline Gray. I still look back at that and I’m like, “These are incredibly dedicated and hardworking athletes that I got to meet because I joined wrestling in high school.”

That’s amazing. I’m so glad you got to have that experience of gaining strength and confidence in yourself.  And were you here all throughout last year or did you go abroad?

Yes! In the fall, I went to Howard University, and in the spring, I was in Cali, Colombia. It was a wonderful year.

What were some moments that stick with you from your time at Howard?

[At] Howard, the professors are awesome, and the classwork is also something I really appreciated because the classes I took there would have never been offered here at Williams… Simultaneously, the work wasn’t nearly as difficult or like, strenuous as the work here at Williams, so I was doing interesting, great work and also not feeling pressured … which was a big change. And obviously, being at an HBCU also gave me just a new perspective on the Black experience and Black academia.

I actually auditioned for one of the step teams at Howard. So the other big moment was when I was on a step team at Howard, and we had a competition at Princeton, and we won the step competition.

It was really, really fun. And my mom got to visit because New Jersey is closer to New York City than D.C., so she actually got to see me win as being part of the Howard step team.

And were you in Colombia in the spring when the semester got cut short?

Yes… It was an incredible experience while it lasted. The weather was always tropical, and the food was to die for. Like, I will go back just to eat street food. It was so incredible. And it’s been really, really tough being back on campus especially because of that.

We stayed in an actual residential building with actual Colombians as our neighbors, and so we got to really connect with the people around us. And even their children would go to school nearby, and it was so sweet to be introduced to a whole [Latinx] community and use that to improve my own Spanish but also my understanding of Afro-Colombians particularly… That was one of the main reasons I wanted to join that program. Yeah, I’m really thankful that I got to improve my Spanish there, especially because my mom [has] always been hesitant to speak Spanish with me growing up just so I could, like, more easily assimilate into “American culture.” So it was really nice, even though it got cut short, to go home and truly be able to speak to my mother in Spanish and her friends in Spanish. And her friends would comment on my Spanish, and I’d be like, “Yeah, I’ve improved.” [Laughs.]

Oh, we love it. The final question I have to ask you – are you growing a forget-me-not in a shot glass?

So when Lyza invited me to go hiking, on our way back, we took this path that was kind of this tunnel of beautiful, over-branching leaves and flowers, and it was really magical. At one point, I spotted out of the corner of my eye this one tiny, tiny blue flower on the ground, and I went to look at it, and I was like, “Holy shit! This is a forget-me-not!” [In] the past year — I don’t know how I discovered them – I decided that forget-me-nots were my favorite flower in the world. I really want them tattooed on the side of my thigh or something one day. So I saw one in real life for the first time, and I carefully plucked it. It kept the roots, and I took it back to my room, and it was so tiny that the only place I could put it was in a shot glass. [Laughs.] So I put it in a shot glass, I put some water in it, and the next day, it went from one flower blooming to two other flowers blooming, and I was like, “This is a sign.” [Then] Lyza went back to the same path a couple days later and couldn’t find any other forget-me-nots … and I was like, “I found the last forget-me-not?” That’s so poetic.

I’m rooting for that forget-me-not.

Yeah, I mean if all else fails, I still kept Hunter alive, so that’s all I need.