One in Two Thousand: Hannah Goldstein ’20 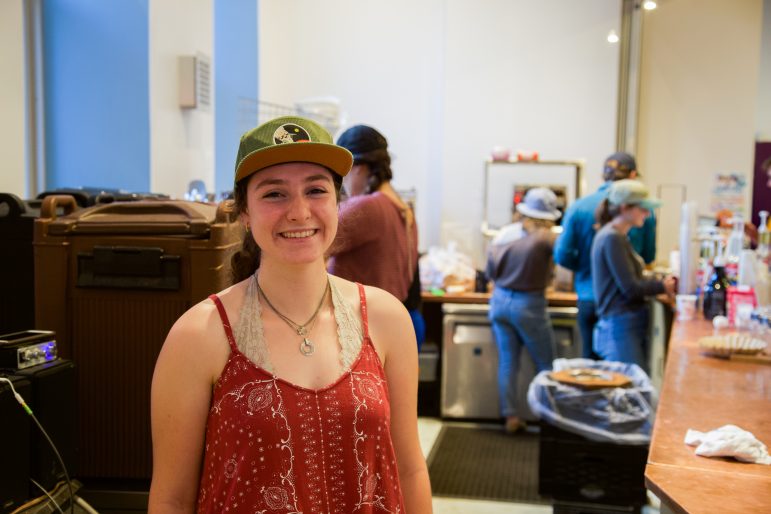 I got to know Hannah Goldstein ’20 through our work together in Students for Israeli-Palestinian Dialogue. I was immediately struck by her sense of adventure, willingness to take risks and care for other people and their stories. I sat down with Hannah over a much-needed Driscoll brunch to learn more about her love of the outdoor industry, upcoming semester abroad and more.

So, in high school you spent a semester at the High Mountain Institute (HMI), right?

Yeah! My junior spring in high school, I went to HMI, which is a semester school program. It was a really cool experience because it solidified this idea that I had always loved the outdoors, but I had never understood that you can think about them in an academic way. It was a cool opportunity because I was able to connect those dots and started reading things about the environment, which definitely led me to my major here, which is environmental studies.

And you’re going back to Colorado for Winter Study! Tell me about that.

For Winter Study I’m doing a 99 [independent project], and I’m making a podcast on gender politics in the outdoor industry. I came up with the idea because as a woman who’s really involved in a lot of outdoor adventure stuff, especially really intense expeditions, I’ve been in some scenarios where I haven’t been listened to as much because I’m a woman. So even in dangerous scenarios where we’re trying to assess the risk of traveling across some part of a glacier, we’re all coming together as a group trying to make a decision as to what to do to move forward, and the group is pretty much all men except for me. I come up with an idea or an alternative route, but people don’t listen to me! And it really felt like it was because I was a woman. So, there are a lot of other little examples like that, and it really inspired me to examine that more. In the outdoor industry podcasts are really big, and people really like sharing stories, so I thought that this could be a cool way to start some change in that place. So, I’m starting with ski patrollers and using that as a cross-section of emergency medicine and the outdoor industry. I’ll be traveling around Colorado interviewing a lot of really cool people.

Do you think you want to work in the outdoor industry after graduation?

That’s a good question. I think so. My whole life I’ve wanted to be a teacher. For some reason, [while] being at Williams, I didn’t really take that seriously, even though that’s the one thing I’ve known I’ve always wanted to do. Most of it is because it feels like there’s all this pressure to do professional jobs, so I’ve gone through phases of things that I know I care about, and would want to do, like being a psychiatrist or being an environmental policy-oriented lawyer. But underneath everything, I’ve always wanted to be a teacher. And recently I’ve been like, “You know what, it’s okay. I want to be a teacher.” And I think that there’s some really cool potential to combine the outdoor world with actual serious studies, so I’d really love to get involved in that cross-section.

So next semester you’re going abroad – do you want to tell me about what you’re doing?

[Laughs.] Sure! So next semester I’m going to study at an environmental institute in southern Israel. The student population is comprised of one-third Israelis, one-third Palestinians and Jordanians and then one-third international students. And the whole theory and practice of the institute centers on how to use environmental studies and science as a form of peacemaking. It’s a really cool place, and I think they pay a lot of attention to people’s stories and who they are and how we can use paying attention to people and our environment as a way to make the world in its entirety a better place.

That’s amazing. Tell me about your independent study on the Hoosic River!

I went to a really alternative high school in that it was project-based, so something that I learned there was how to come up with an idea and execute it from all different angles. Coming to Williams, this was the most traditional academic setting I’ve ever been in, and it was really overwhelming. And I was also kind of fed up with it, because there was this disconnect between what I was learning, the people that were around me and the place that was around me. I felt like I wanted so badly to get smarter, but where was that smartness going to? So, I came up with this idea for an independent study. I had previously taken a course with [Lecturer in History] Annie Valk on oral history, and I really loved that. And I was thinking about how I could talk about oral history in terms of the environment. So, I ended up doing an independent study where I paralleled the environmental history and the oral history of the Hoosic River, the river that runs through Williamstown and North Adams, which has some really intense history in the area. I also worked with a local organization, the Hoosic River Revival, and got a feel for what they were doing. I ended up making a website and documenting some photos that I took and some interviews that I did, so that the stuff that I did could also work with the people that I got that knowledge from, and in a really small way give back a little bit based on all this academic, hoity-toity stuff that was going on in my head. I wanted to share that.

How about your involvement with Storytime?

Yeah! Storytime has always been something that is really important to me at Williams because it feels like a really nice way to foster intentional community. Throughout this year and this semester especially, we’ve been thinking a lot about what that means and who the community is for and what we can do to really make it a good place for everyone. Honestly, at first, I was really hesitant to make lots of changes, and I was really nervous because for who I was, I really appreciated what Storytime was, and I really valued that. And it was hard for me to see past that, because it was really something that I felt so attached to and felt was so special. But more recently as we’ve decided to institute changes, it feels really right, and it feels like we’re doing the right thing to try to shake things up a little bit. It’s a really good reminder that not everything has to be set in stone. And especially when it comes to people’s stories and how they share them, it doesn’t all have to happen in a uniform way.

That’s awesome. People at Williams are so scared of change, but it can be good!

It’s so true. I try and take a lot of really big risks. You know, I say “big risks,” but they can be really small things. So, if I have a crush on someone, I’ll ask them on a date. And you know what, sometimes it doesn’t go very well. But it feels important to me to just go out and do it. I have a very “do, do, do” personality, where if I come up with an idea, I want to execute it. But I think that it allows me to take risks, which I otherwise might not be super comfortable taking. I just like jumping into things, and just trying to swim once I’m already in the water.