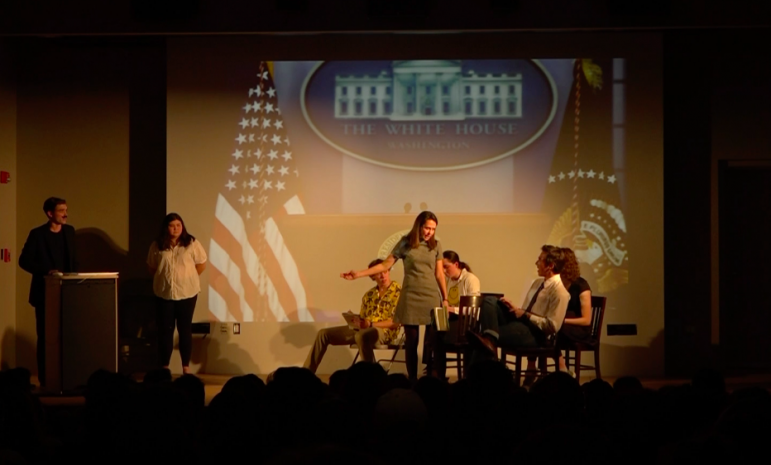 Julia Cochran ’19, PAC president, greeted the audience, giving a nod to the show’s director Abby Lloyd ’20, and introduced head writers Evelyn Elgart ’19 and Benjamin Stanley ’19, the latter of whom she jokingly said was only there “to not alienate the men in the audience.” She acknowledged PAC’s female leadership in a genre of entertainment that has historically been male dominated.

Sam Jocas ’21 performed the first of three stand-up sets, cracking relatable jokes about how CNN is often weirdly played at the gym which can make it hard to work out while “watching the world fall apart.” For the second set, Owen Foster ’22 delivered a refreshingly positive list of “some things that I like,” among those being neck pillows and the uplifting results of the last election. Joey Mullen ’19 presented a fearlessly blunt set tackling Hollywood’s culture of representation; “Why do movies think we need a white main character to identify with – like a movie about gladiators,” Mullen asked. “I already know I’m not a gladiator, I can suspend my disbelief a little bit more.” He also came to the conclusion that Michael B. Jordan would be a good choice to play him in a movie about his own life.

The next portion of the show began with a gameshow sketch entitled “Pronounce That,” in which three contestants – an English teacher obsessed with correcting people’s grammar, a pretentious theater actress and Johnny Depp – all took turns in pronouncing difficult words. The punch line came when Depp failed to correctly pronounce “Caribbean.” This act was followed by a job interview sketch that made fun of how popularized astrology has become; two heads of a company are looking for a new employee but the candidate is left frustrated when they reject him after only asking for his birthdate. He becomes extremely analytical and tries to rationalize with them, proving to the interviewers that he is, for sure, a Virgo.

A class seminar sketch introduced the show’s longest running joke, which centered on an annoying classmate who first interrupts someone in order to give a long-winded response to the professor’s question and does it again later during a wedding sketch when he begins his wedding vows by saying “to piggyback on that.” After his daughter makes her final comments on his deathbed, he comes back to life just to say “I’d like to push back on that…” Although these punchlines were dispersed throughout the show, they received some of the hardest laughs and connected everyone in the audience through the shared experience of the “irritating classmate” who always starts their class commentary with an obnoxiously overused phrase.

The show was arguably at its best when a sketch about Hannibal Hamlin, America’s 15th Vice President, introduced a sequence of back-to-back sketches that shone not only in their creativity but also in the skillful delivery of an already great dialogue. In the Hannibal Hamlin piece, the ghost of the 15th Vice President stands before the White House press corps as they try to figure out who he is. When they confuse him for Hannibal Lecter, the reporter from Fox News inevitably ends up defending cannibalism. Soon after the sketch ended, one of the group members came running from the audience towards the stage dressed in sports gear, apologizing for being late and that he came to do the show because “who cares what society thinks?” The audience quickly caught on to the High School Musical spoof when he exclaimed, “sports taught me teamwork, theater taught me it’s okay to be who I truly am.”

The next sketch was a reimagining of the first table reading for Call Me By Your Name, in which the book’s author and the film’s director clash over a few creative liberties the director has taken, including changing Elio’s name to “John Jacob Jingleheimer.” Once the comedian who played the director began shouting in his ridiculous Italian accent, another actor mimicked Timothée Chalamet’s angsty mannerisms, and it was enough to have the entire room shaking with laughter. The comedians seemed to thrive off the audience’s energy as each sketch managed to build off the previous with even more momentum.

The energy in the room was at its peak in a sketch about two exorcists who play “good cop, bad cop” in order to get a demon to leave a young girl’s body. The audience was enthralled as the possessed girl was shaking back and forth and the more seasoned exorcist, who in an effort to defeat the demon, shouted what was arguably the best line of the entire night: “LATIN LATIN LATIN LATIN LATIN.” In the end, through the rookie exorcist’s empathetic tries, we find out that the demon was simply possessing the girl because of self-esteem issues. The show ended with the lyrical masterpiece “Garbage Man,” a Grease-style slumber party musical number about one of the girl’s boyfriends being a garbage pick-up man.

“It is fully a miracle that this show gets put on at all because the timeline is so short. We have a week for the cast to learn all their lines, stage everything, figure out tech, market the show … this show always miraculously gets put together through the sheer force of comedians needing attention,” Cochran said about putting on the fall show.

“PAC is a crazy week, but it’s worth it every time. We had a great crowd for Raising Hell and I hope the student body keeps turning out to see our dumb comedy show,” she said.