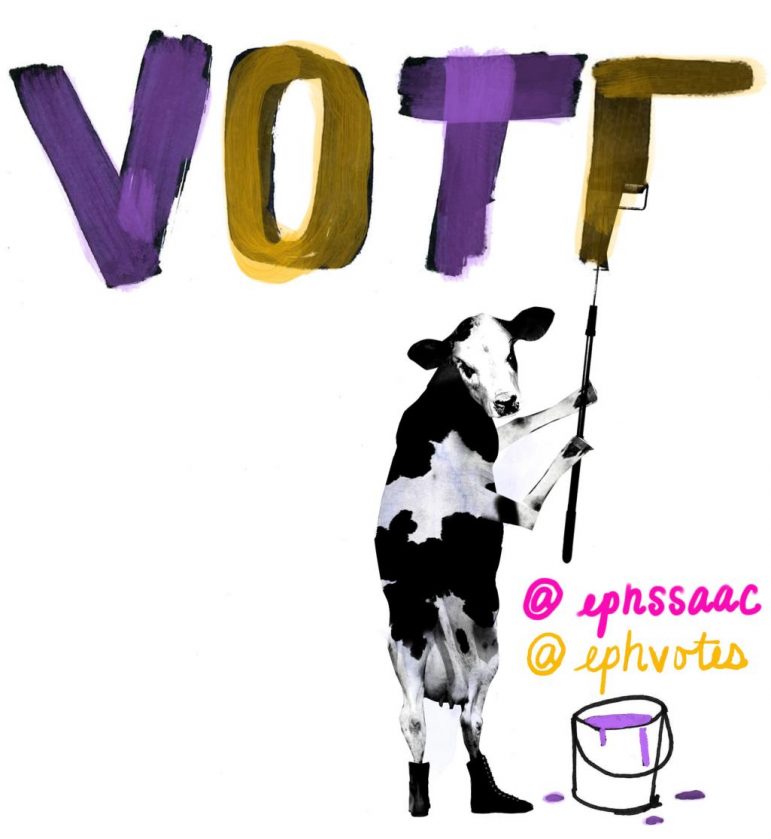 The Student-Athlete Advisory Committee is promoting voter registration among student-athletes through digital campaigns as part of a NESCAC challenge. The image above was designed by programming committee chair Jo Kim ’22, a junior on women’s golf. (Visual courtesy of Jo Kim ’22.)

On Sept. 29, the NESCAC announced its “ALL IN” student-athlete voting challenge, dedicating Nov. 3 as a day free from all athletic activity and encouraging the student-athlete advisory committee at each member institution to start campus-wide campaigns to get 100 percent of student-athletes to commit to vote.

One student from the College, however, had started her own initiative on campus long before the NESCAC promoted it.

In the first days of school, Maya Jamroz ’23, a player on women’s tennis, started to help her teammates make their plans to vote. “During my fall return-to-campus quarantine, I emailed EphVotes to let them know about the team voter challenge and to get their suggestions for the best registration resources,” she told the Record via email. EphVotes is a student organization at the College that is focused on improving student voter registration and turnout. “From there, I got all my tennis teammates registered and then challenged other Williams teams through social media.”

According to Jamroz, the idea of a “team voter challenge” was first introduced to her by head coach of women’s tennis Anik Cepeda, who had wanted to bring her team into a movement among sports teams on college campuses across the country.

“A coaching friend of mine at USC mentioned that one of their sports teams had started a voting ‘challenge,’” wrote Cepeda. “When one team was done with registering, they’d publicly challenge another team to do the same.”

“Our squad was looking for ways to be engaged in the Williams community and so I casually pitched the idea to start it here,” she continued. “There was a lot of enthusiasm.”

Jamroz, who had worked with the Millennial Action Project –– an organization with the mission to bridge the partisan divide by bringing young people into the political process –– was especially passionate about the cause.

“I’m really concerned with the state of our current democracy and the increasing polarization of our government,” Jamroz said. “All young people will be facing the long-term consequences of our hyper-partisan government, and I want to help protect that future — not just for my generation, but for future generations.”

After women’s tennis had completed the drive, Jamroz and other players on the team next decided to challenge men’s track and field as well as women’s lacrosse. Soon, the challenge began to bounce from team to team.

Allie Clark, assistant coach of swimming and diving, said that when it reached her team, her members were eager to participate. She said that all that she needed to do was send them the information, and every eligible swimmer and diver quickly registered and pledged to vote.

“Truthfully, very little was done on my [or] the coaching staff’s end to motivate the swim and dive team,” she said. “They were all very excited to get involved.”

But swimming and diving was not satisfied just to accomplish the task itself and pass on the challenge to other teams at the College. A group of five or six members soon set their sights outside the Purple Valley and took the competition to yet another level: They challenged all Div. III swimming and diving teams across the country to achieve 100 percent voter registration.

Gabby Mercier ’21, a diver on the women’s team, was one member of the group. Inspired by the intramural initiative from women’s tennis, Mercier set the goal to first expand the challenge to all other institutions in the NESCAC and then to the entirety of Div. III.

Along with several other teammates who had volunteered to help, Mercier reached out to all 265 Div. III swimming and diving teams to join the College in an initiative to get 100 percent of their eligible athletes registered to vote. To date, 50 teams have accepted the challenge, and 30 have completed it, according to Clark and Mercier.

Cepeda estimated that between 22 and 24 out of 32 teams at the College have completed the challenge. NESCAC Votes aims to help increase the voter turnout rate among students at the 11 NESCAC schools from 53 percent to 64 percent in the 2020 general election.

“It truly was inspiring to see so many teams both within our conference and across the nation committed to fulfilling their civic duties,” Mercier said. “I am thrilled to see so many swimmers and divers join together in an effort to increase participation and subsequently voter turnout.”

Mercier was assisted in her efforts by Georgia Panitz ’22.5 and Maddie Annis ’23, who contributed by promoting the challenge on the team’s social media accounts.

“I’m fortunate that I had the opportunity to use this platform to spread awareness of the importance of voting and to help make a tangible change, both within the Williams community and the swimming and diving community as a whole,” she said.