One in Two Thousand: Jacob Fink ’23 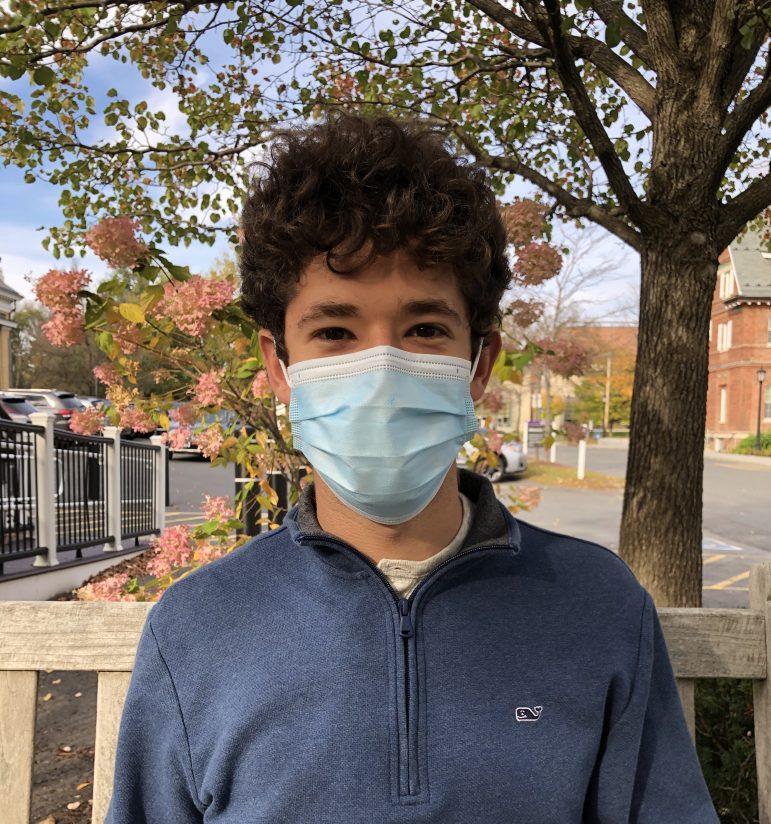 Each week, we randomly select a unix from a list of all current students at the College for our One in Two Thousand feature. As long as the owner of a selected unix is willing to be interviewed and is not a member of the Record board, that person becomes the subject of our interview. This week the computer (using a script in R) chose Jacob Fink ’23, who discussed growing up in Williamstown, his experiences as a Duncan Robinson superfan, his interests in psychology and Malcolm Gladwell. This interview has been edited for length and clarity.

First of all, do you go by Jacob or Jake?

I’m comfortable with either. I kind of prefer Jake, but it’s pretty 50/50 what I’m called here, I’d say. That’s perfectly fine with me.

What are your thoughts on whether Jacobs should go by Jacob or Jake?

Throughout my whole life in high school, I was always Jacob, but then I was kind of feeling Jake the last couple of years so then made a little switch, but it hasn’t — many people still say Jacob, which is totally fine with me. And my high school friends mostly do as well.

Do you think there are particular character characteristics associated with Jacob versus Jake?

Perhaps I thought Jake sounded like an older name. But then I realized that just wasn’t true at all. So I kind of backed off that bandwagon. So [whatever] is natural for the person talking to me, I guess. Do you go by Jake?

No, I go by Jacob. I don’t know. No one’s ever said I’m like a Jake. I mean, some people have tried to call me Jake, but it didn’t really stick. I don’t know what that means.

In my three places of employment throughout high school, all the bosses naturally called me Jake, so that kind of got me thinking like, I guess I look like a Jake.

Why specifically, did you choose [the benches near the psychology building for the interview]? Does this have any meaning for you? Or is it just chill?

I’m planning to double-major in psych and economics. The psych building has some very fond memories. I did a remote psych research with the social psychologist here, Professor Jeremy Cone, over the summer. And I was back in town for — we had Zoom meetings every time — but then I was back in town for the final Zoom meeting, and so we sat socially distanced with masks on right here. And, I don’t know, I just kinda come back here every now and then.

When you say back in town, you mean here.

So you’re from Williamstown. What is that like? Would you wander around campus when you were a kid?

Yeah I mean, you have to. Like,  Spring Street’s the one street in town. And then if you want to play basketball, you just go to Chandler or Lasell Gym. I played there hundreds of times throughout my life.

What was a Williams College student in your mind when you’re growing up? Like, what did they seem like to you?

I had several babysitters when I was younger, who were Williams students, so they’re always cool people who I looked up to. I guess I didn’t really think about academics at a young age. I just passed so many students [on the street] — I thought of them as like role models to some extent. And the ones that hung out with me, when they babysat me, are always some of the most fun people. So that got me thinking, I guess I would enjoy people here.

I heard you were interested in psych before you came to Williams.

I read some books about social psych from the last few years. And I took AP psych in 11th grade — that kind of sparked my interest in it.

I don’t know if you’re familiar with the author Malcolm Gladwell.

Yeah, so he’s become one of my favorite authors over the last couple years.

I didn’t know he was a psych kind of guy.

Yeah, I mean, I’d say he touches on a lot of social psych principles in his work.

Is there any of his work that has been particularly influential for you?

The first book I read of his was Outliers, and … one of the main parts is how people who excel often have a lot of luck involved with it. Like, being a professional athlete, it matters a lot of when your birthday is because [of] the cutoff point for your sports. If you’re older than other people, then you get on better teams, and then you play more games. It’s like a self-fulfilling prophecy. So I thought that was pretty cool.

It got me thinking like, how can I set myself up to be in those positions to have a self-fulfilling prophecy towards success?

This is pivoting a bit, but I heard you’re big into sports. Especially into — I really don’t know how to pronounce this guy’s name.

Right. What do you like about tennis? Why do you watch tennis?

Tennis was my primary sport that I played for a good number of years, probably about age 10 to age 16. I was, like, all about tennis. And never was quite as good as I thought. But I got tremendous, amazing joy out of it, and became a big professional tennis fan, so I followed Novak since about 2009, 2010. It’s quite the amazing story. He grew up in Serbia when there was a lot of war going on there. He came up from a pretty hard background, and so [I have] a lot of respect for him. I like his tennis game, but also as a person, he is not as well loved as Rafael Nadal or Roger Federer, but I think he has some admirable traits about him that I really respect.

I heard you and Duncan Robinson have exchanged a couple of messages on Instagram.

Yeah a little bit. I follow the men’s basketball team pretty closely. Duncan was here in 2013 to 2014. And actually, that was one of the three times that I went down to Salem, Va., to watch the team play in the Final Four. Always a great experience to take a car ride down like 10 hours each way with some of my friends — and a parent would drive. I got to know him a little bit from going to so many of the games and then follow them as did a lot of Williamstowners when he transferred to Michigan. And then maybe his senior year at Michigan or early in his pro career before he was actually playing on the Miami Heat, I reached out to him over Instagram direct message and kind of reminded him who I was.

He pretended to remember you?

I think he did. I don’t know, I might have blended in with all those like superfan kids at the time. We’d paint our chests for the Amherst games and stuff… We do exchange messages every so often. Mostly just congratulating him on his frequent good games. He’s appreciative of the Williamstown support for sure because I can tell you there are really a lot of people from the community, probably hundreds, who follow him so closely. He was only here one year but he definitely means a lot.

That’s really cool. And you painted your chest?

Yeah, in Salem. That was always a thing. Actually, Professor Noah Sandstrom of the Psychology Department was one of the — his son Theo was one of my close friends growing up — one of the ones who drove us to Salem, at least, maybe two of the three times I went, actually. And so he would always paint our chests hours before the games. Make sure we were well prepared for our cheering.

What would you paint on your chest?

We’d spell out Williams [or] Ephs, depending how many people there were. Sometimes there were too many people, so we’d have to have many exclamation marks at the end of it.

Did you have no sense of wanting to get out of the place you grew up in?

No, I visited a lot of schools, many of which were NESCACs. I think I definitely wanted to go to a liberal arts school, I quickly realized, but I tried not to let location play a huge role. I think Bowdoin and Middlebury were high on my list as well, maybe the next two after Williams. I did think for a little bit like, I don’t want to stay here. But I kept coming back to all the positive things about Williams, and it really seemed to outweigh what it meant to stay here. And that is something that crosses my mind every once in a while — the fact that I am still here, while some of my friends are in, you could argue cooler places. I think that is important. And I look forward to exploring that after college. I wouldn’t say that staying here has been a positive or negative thing. So I guess it being neutral is a pretty good thing.