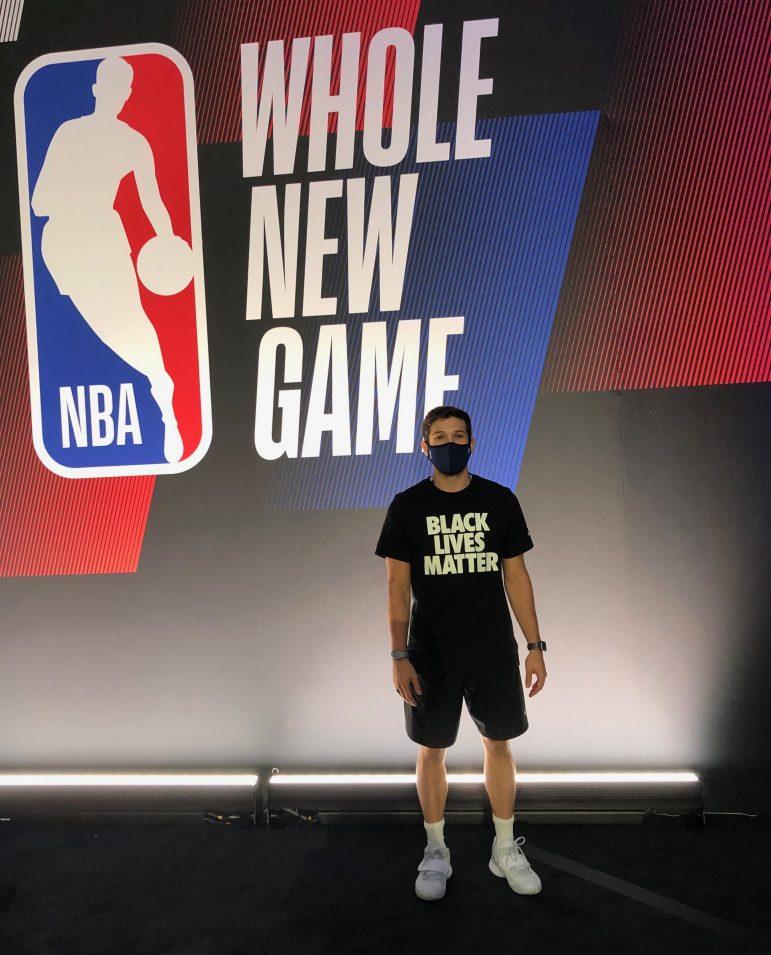 Mike Greenman ’18 worked in the NBA bubble over the summer preparing the locker rooms and helping players warm up before games. (Photo courtesy of Mike Greenman.)

Mike Greenman ’18 had just finished his time as a graduate assistant for men’s basketball at Northwestern University when a fellow assistant approached him with an offer: Would he like to work in the National Basketball Association (NBA) bubble at Walt Disney World in Orlando, Fla., as the league attempted to finish its season amid the COVID-19 pandemic?

“They were looking for a couple extra people to fill in the last five or six slots, because they didn’t have enough people, and they asked me if I would be interested, and I didn’t really think twice about it,” Greenman said. “I was like, ‘Yeah absolutely!’”

Greenman, a former point guard at the College before taking the graduate assistant position at Northwestern, did not know what his new job would entail, only that he would be tested once a day and asked to abide by some of the most carefully considered precautions anywhere in the world. Many doubted at the time whether the so-called bubble would even work.

While some thought that the league would only last in the bubble for a couple weeks before an outbreak forced everyone home, Greenman was optimistic from the beginning. He not only looked forward to seeing the games but also wanted to understand how the league could create a safe environment for its players and how it could seamlessly handle the complicated logistics of providing food, hotels and transportation for such a large group.

The NBA announced its plans for 22 teams to travel to the bubble on June 4, at a time when no major North American sports league had managed to restart, and colleges and universities were still months away from reopening. Teams finally started to arrive at the complex in early July, and by the end of the month, games had resumed, all behind closed doors.

Amid nationwide protests over police brutality, several players entered with concerns that went beyond the pandemic about leaving their communities, but the league and the players’ association worked together to allow for the bubble to become a platform for social justice advocacy.

On his second day out of his seven-day hotel-room quarantine, Greenman was given a tour of the courts, and that was the moment when the bubble became real for him. The courts, surrounded by video boards and socially distanced chairs instead of benches, were unveiled to the teams and staff a few days before photos were released to the general public.

“All right, I’m really in the bubble,” he recalled thinking to himself. “There’s no fans, there’s no seating for fans — this is the court and this is happening.”.

Once Greenman got out of his quarantine, he started to work one of the six games that happened every day. The former graduate assistant would arrive early to the arena, help set up the locker rooms and then rebound for the players or otherwise help them warm up before tipoff, he told the Berkshire Eagle in August.

There have been no cases in the bubble among players who cleared their initial quarantine.

Men’s basketball head coach Kevin App said that Greenman, who comes from a coaching family, got much out of the day-to-day work. The two stayed in touch and sometimes discussed what he was seeing on the job.

“He felt it was a unique and beneficial opportunity to see NBA professionals, coaches and staff up close,” App said. “The level of detail, professionalism and routine really stood out to him.”

App, who is teaching a remote physical education class during the first quarter on how to build a championship basketball team, invited Greenman to address his students at the beginning of the semester. The 2018 NESCAC champion not only dished his thoughts on basketball generally but also shared the unique insights he gained from his work in the bubble.

“Mike was the first guest speaker for the class and gave some great anecdotes, like trying to accurately gauge how to throw a bounce pass to [7-foot-5 Boston Celtics center] Tacko Fall,” App said.

Priscilla Singleton-Eriyo ’23, a student in the class and a sophomore on women’s basketball, said she has enjoyed watching the action from the bubble — as well as the social justice initiatives led by players — and appreciated the “inside look” into the gameday routines of star players like Los Angeles Clippers forward Kawhi Leonard that Greenman offered. She was impressed with details about both their work ethic and their personalities.

“I think NBA players get a lot of media attention and so false narratives begin to spread,” she said. “Mike was able to share short candid stories of player interactions with the team, other players and coaches.”

Outside of his shifts helping players warm up before games, Greenman could move around his hotel and the surrounding area, where fishing on a man-made lake was a popular activity among the players. He said he appreciated that everyone in the bubble was used to working around players and remained respectful of their space without the need for bodyguards.

“They got to walk around without really a worry in the world,” Greenman said. “It wasn’t like anyone had to run up to them and [ask] them [for] an autograph. They could go and do whatever they wanted without anyone judging them or being able to interrupt them.”

The players and the staff were not necessarily separated. Greenman, who roomed with Miami Heat small forward Duncan Robinson his first year at the College, happened to share the same hotel as his former teammate, so the two were able to regularly spend time together.

Robinson, who played the majority of last season in the developmental G League before signing a two-year NBA contract with the Miami Heat at the end of the year, has quickly become one of the best shooters in basketball. He is a starter and the fifth leading scorer on a team that has unexpectedly advanced all the way to the NBA Finals.

“Even going into this year, when he signed the contract with the Heat, I wasn’t necessarily expecting him to be doing everything that he’s doing right now, that’s for sure,” his friend Greenman said.

The finals began last week, with Robinson and the Heat facing off against LeBron James and the Los Angeles Lakers. The Heat currently trail three games to one in the best-of-seven series.

For Greenman, who returned to his home in New Jersey before the playoffs started, the future is uncertain. He is working for a start-up company that develops basketball play-drawing software now, but he hopes to become an assistant coach in the NBA at some point in his life. In the meantime, he is looking for jobs as a G League assistant coach or an NBA video coordinator, but it is unclear when and if the G League will return to play.

App noted that the former point guard was able to connect with other alums of the College in the bubble. San Antonio Spurs assistant coach Will Hardy ’10 helped to lead his team to a 5-3 record in the seeding games but fell just short of making the playoffs. Hardy has been frequently mentioned among the candidates for one of the five head coaching vacancies in the league.

Greenman, however, insisted that the bubble was not meant for “networking” and called the overall experience, from his initial quarantine to his shifts at the arena and his hangouts with his former roommate Robinson, “unbelievable.”